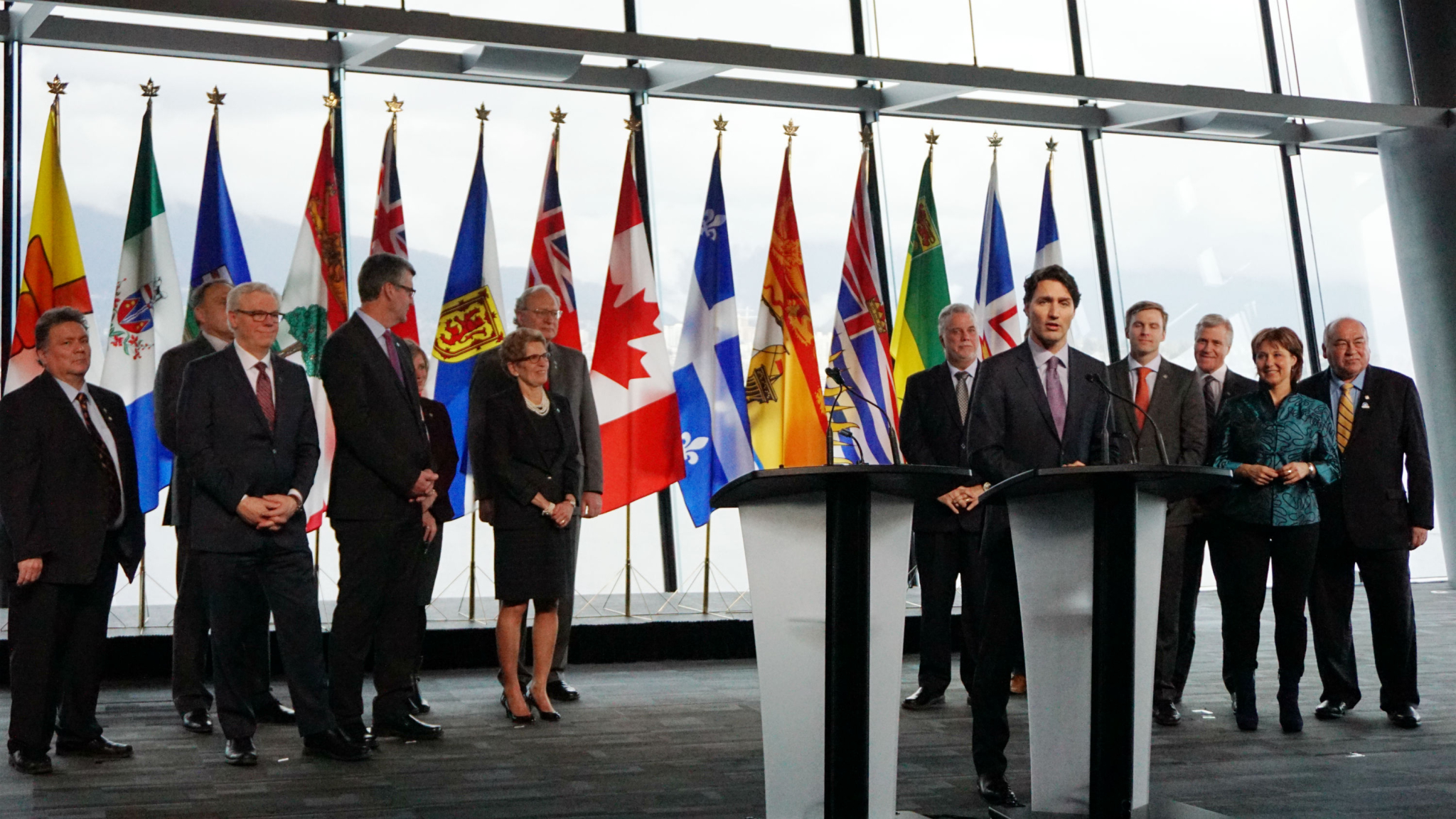 After heated deliberations that ran nearly two hours late behind closed doors, Canada's premiers have finally come up with a framework for clean energy and climate change.

The provincial leaders, who all entered the meeting on Thursday with wildly different opinions on a pan-Canadian minimum carbon price, all agreed that carbon pricing must form part of Canada's climate change solution.

They did not, however, reach a consensus on a minimum price per tonne of CO2, and will instead spend the next eight months discussing how that "mechanism" may be adapted to each province's and territory's specific circumstances. The consultations will focus specifically on the realities of Indigenous people, Arctic, and sub-Arctic regions, they said.

"The commitment we made today with the Vancouver Declaration shows all First Ministers of this country united on carbon-pricing mechanisms," Prime Minister Justin Trudeau told reporters outside the conference in Vancouver.

"The fact that we have consensus on the need to include carbon-pricing in our approach to addressing climate change across the country is a great thing indeed."

Trudeau would not confirm that he still intends to force a minimum price on the provinces come the October 2016 deadline, but emphasized that carbon taxes are only one tool in the tool box in tackling climate change. The premiers will now begin work immediately on three additional strategies, including clean technology, innovation and jobs, and adaptation and climate resilience.

All will report back together in the fall to come up with a more concrete plan for clean energy and climate change based on the findings. It wasn't the bold solution environmental organizations were hoping for, but was widely recognized as a "good first step."

The right ingredients for a climate change plan

"Developing the climate strategy cannot be a bottom-up exercise that is only a sum of what sectors, industries, and provinces are willing to do," said Dale Marshall of Environmental Defence in a public statement.

"Instead, it must reach for the greatest possible carbon emissions reductions. The federal government has the legal authority to meet international commitments and a clear obligation to regulate carbon emissions and therefore it must act."

The prime minister announced that the government would soon ratify the COP21 Paris Agreement to keep global warming in this century below two degrees, but did not announce new emissions targets for Canada. The framework does however, vow to invest green infrastructure and transit, advance vehicle electrification, foster regional plans for clean electricity transmission, and improve efforts to reduce dependence on diesel in Indigenous, remote, and northern communities.

Merran Smith, executive director of Clean Energy Canada, said the declaration has the right ingredients for a more effective plan, but it will take a while to come up with an effective solution.

"The policy tools work; things like the carbon tax, the clean power plan, and the low-carbon fuel standard," she explained, "but you have to keep turning up the lever."

Despite the declaration's weaknesses, she added that the fact the government even had the discussion to begin with should not be overshadowed as an accomplishment.

"This agreement promises to deliver a first for Canada — a truly national plan to hit a climate target," she said. "We've never done that before."

Both the NDP and Conservative environment critics however, strongly criticized the vagueness of the framework, chalking it up to a plan to make a plan at a later date.

The Vancouver Declaration is an "outline of the vision and principles" that will guide provincial and territorial governments moving forward on sustainable and clean economic growth, said a joint statement from the premiers and prime minister.

That's an awful lot of waffle, said Conservative Official Opposition environment critic Ed Fast, given the 3.3 per cent drop in business investment Canada experienced in the fourth quarter of 2015.

"He simply said we're going to continue talking about it," he told National Observer. "The problem is it's bad for the economy, because those who want to invest in our economy have basically parked those investments because they don't have certainty or predictably.

"In many ways, it's a sad day because Canadians I believe accepted the prime minister's word that we were going to have a climate change plan today. It didn't happen."

NDP environment critic Nathan Cullen further said that the prime minister has "punted the problem down the road," rather than following up on sound environmental election promises.

"Initially the Liberals were talking tough, but it seems like they backed off any of their more ambitious ideas for what this meeting could produce," he explained.

"I was in Paris and the strong idea was left that Canada would have a plan three months later, and now we have a plan to later maybe have a plan — and that's not going to tackle climate change."

Every month a firm climate action plan is delayed is another month of taxpayer time and money, he added, and neither Canadians or environment can afford to wait.

Carbon pricing can work for Canada

After the announcement, Saskatchewan Premier Brad Wall — the strongest critic of carbon pricing minimum — conceded that carbon pricing could work for his province if regionally-adapted.

British Columbia Premier Christy Clark, whose province already has a carbon tax of $30 per tonne, supported the consensus reached on Thursday, but will proceed with caution when it comes to raising it. In order to have responsible carbon pricing, she said it must be net revenue-neutral for individuals.

"There will always be in this country, upward pressure on the carbon tax," she explained. "The goal for me is to make sure any changes that happen protect citizens. We cannot build a consensus around environmental policies if you're making people poorer."