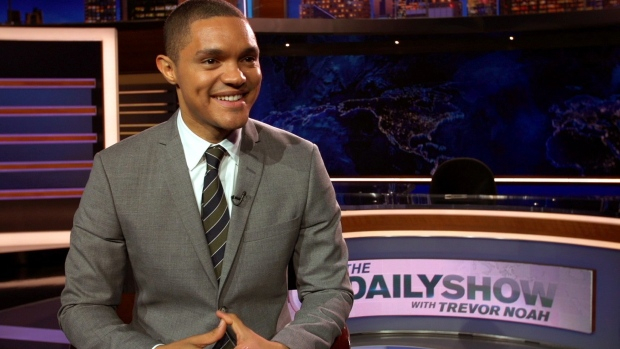 Comedy Central star Trevor Noah has officially joined the ranks of U.S. celebrities infected with a case of 'Trudeaumania' during the Canadian prime minister's official visit to Washington this week.

On a Thursday episode of the The Daily Show called, 'Yes, We Canada!', the South African comedian ripped a set of red lingerie from beneath his clothing and tossed it at the screen shouting, "Are you happy now? You have all of me! Take it all, Trudeau!”

During the episode, Noah pretended not to fall prey to the "magnetic," "charismatic" Justin Trudeau, whom according to the show host, has "eyes you could get lost in" and "the square jaw of a Mountie." As topless footage of the prime minister's infamous boxing match against Senator Patrick Brazeau and images of his recent cuddling session with baby pandas flashed across the screen however, he slowly started to lose his composure.

“Why do I suddenly have the urge to throw my panties at the screen?" Noah demanded, learning that Trudeau was once a nightclub bouncer, snowboarding instructor and whitewater river guide.

The fact that Trudeau loves Syrian refugees makes him even more irresistible, the show host added, ranking Trudeau a solid "eight" out of 10. By the end of the skit, Noah conceded defeat to Washington's "maple-scented visitor" and flung a red bra and panties into the audience.

“He’s tough, he’s ripped and he’s friends with pandas," the comedian swooned. "Surely, there’s nothing else this man can do to make you love him more."

He was joined in his infatuation by Top Chef host and Easy Exotic cookbook author Padma Lakshmi, who spoke as a guest of the program:

"I have a lot in common with the Canadian prime minister," she told Noah flirtatiously. "I, too, box. Just putting it out there. I have a crush on him too — him and the pope."

American blogger, columnist and television personality Perez Hilton has also kept tabs on Trudeau since his arrival in Washington, and praised the prime minister for bringing his "fierce" A-game to his neighbours south of the border.

From the prime minister's "budding bromance" with President Barack Obama to his refusal to take the American leader's "shade" over the Chicago Blackhawks' Stanley Cup win, Hilton credited Trudeau for being truly "AH-mazing."

"In fact, he may have won over the whole country with his suave moves during his stop by in the land of the free," he wrote in a blog post.

Hilton also admitted to tearing up when Trudeau gave the following glowing praise to Obama's children, Sasha and Malia, at the White House dinner:

Finally, he applauded the Liberal leader for letting his "fan girl side come out" while posing for a photo with Canadian singer, The Weeknd.

"Boy, did the politician not disappoint," he wrote. "Can Prime Minister Trudeau just stay in the U.S. forever? That'd be great."

The prime minister concluded his official visit to Washington on Friday.

Trudeau: 'It's me sitting here as PM of Canada and not Stephen Harper'