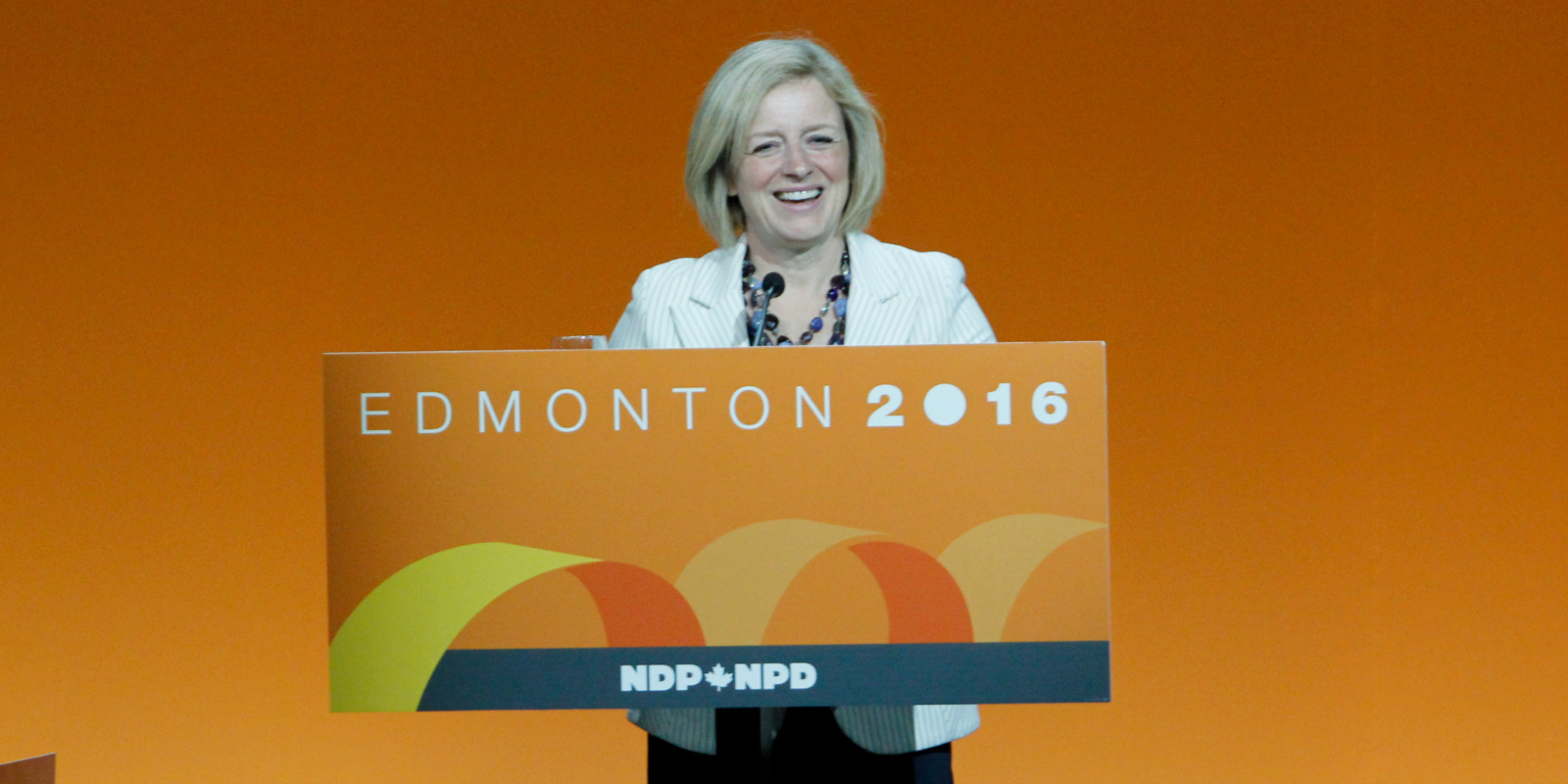 Photo of Alberta Premier Rachel Notley at NDP Convention at the Shaw Centre in Edmonton. Photo by Daniel Rodriguez.
Previous story
Next story

It's time to boost the economy by building pipelines, Alberta Premier Rachel Notley told delegates at the NDP convention in Edmonton on Saturday.

“Alberta is managing a major commodity crash,” said Notley, referencing the steep collapse of oil prices that caused Alberta's deficit projection for next year to double to more than $10 billion.

“The way to [help Alberta's economy] is to build pipelines to tidewater that will allow us to diversify our markets and upgrade products here in Canada,” she said, to loud applause.

Notley urged delegates from outside the province to remember the historic contributions Alberta made to the rest of Canada. She stressed that pipelines were necessary to allow land-locked Alberta to deliver crude to new markets outside of North America.

The premier's speech comes at a critical moment in the convention, as members of the NDP urge the party to adopt the Leap Manifesto — a policy blueprint that calls for Canada to transition off fossil fuels and halt oil pipeline projects.

The Leap Manifesto was a major point of contention among NDP members at the convention, with Alberta environment minister Shannon Phillips calling it a "betrayal" of Albertans.

Notley urged the audience to "think more charitably about Albertans" as they struggled to deal with the aftermath of the oil price crash. Unemployment in the province hit a 20-year high in February.

Notley suggested that building pipelines and protecting the environment were not mutually exclusive goals. She stressed that Alberta would continue to produce oil at a “level of production that is responsibly allowed" under a climate plan focused on reducing the amount of carbon emissions in each barrel of oil.

She also highlighted the successes of her party, which ended a 44-year Progressive Conservative dynasty last year. Notley focused on the Alberta Climate Leadership Plan, which introduced carbon pricing, a cap on oil sands emissions, and plans to transition the province's transition from coal-fired power plants to renewable energy and natural gas.

“We are acting on the basis of a concrete plan that is actually being implemented,” said Notley. “That is what you get to do when you move up from a manifesto to the principled detail plan that you can implement and help you win elections."

"We aren’t making a choice between the environment and the economy," she stressed.

Notley praised NDP delegates gathered in Edmonton, reminding them not to be discouraged by last year's election defeat. She said the Alberta NDP had been "written off" by many in the past, and reminded the room that no party could keep winning forever. She added that if the NDP could win in Alberta, it could also win in any other part of the country.

She closed her speech by emphasizing that Canada could have robust energy, mining, forestry and agricultural industries while being environmental leaders.