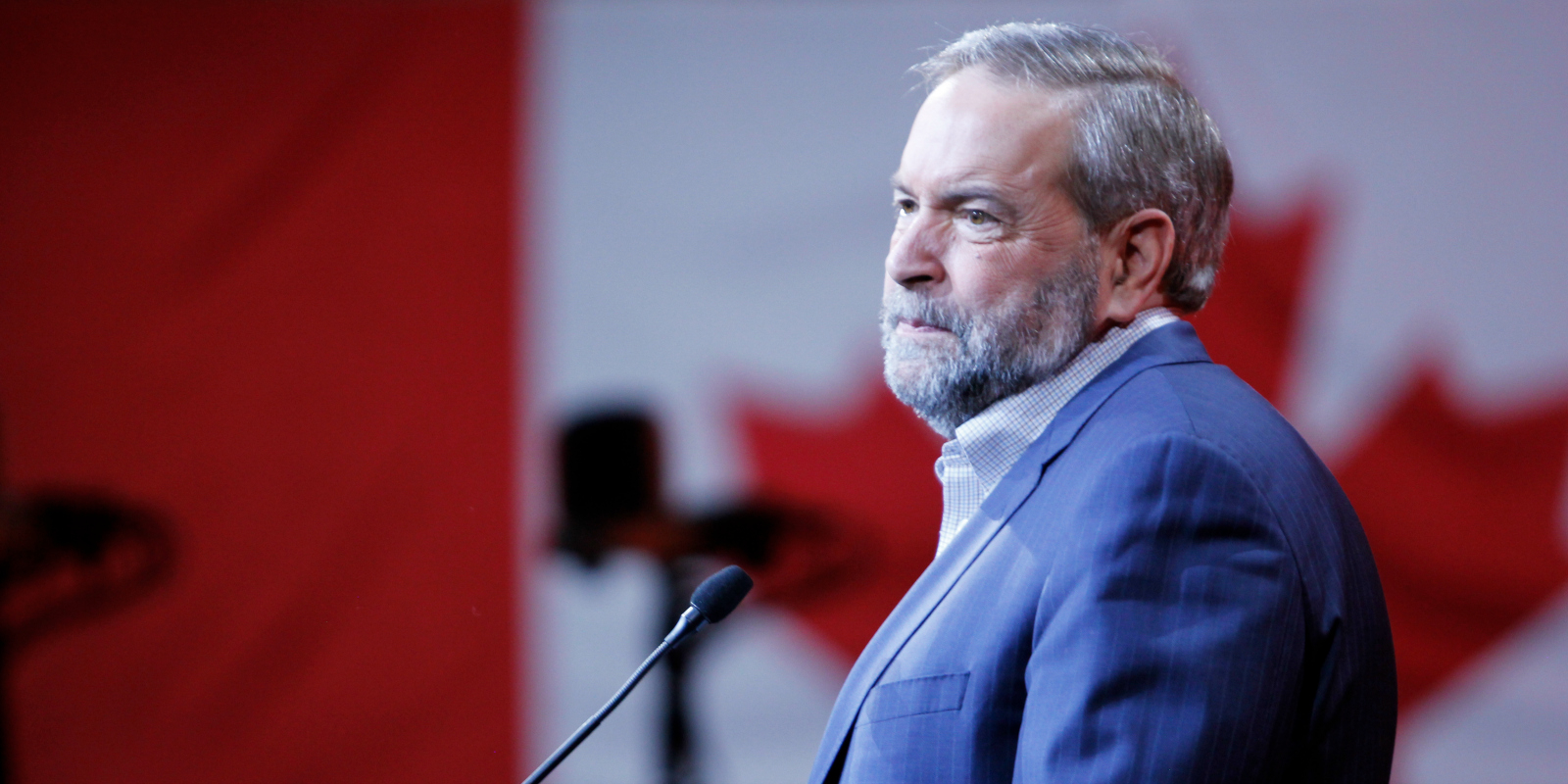 NDP Leader Thomas Mulcair urged delegates at the NDP convention in Edmonton to stay with him. Photo by Daniel Rodriguez
Previous story
Next story

Fifty-two per cent of delegates voted to stage the leadership convention. The stunning results mark the first time that New Democrats have ever tossed out one of their leaders at a party convention.

"Don't let this divided vote, divide the party," an emotional Mulcair said on the stage of a packed convention hall, fighting back tears as he accepted the results.

Although the party's constitution requires the leadership convention to be held within a year, delegates later voted to postpone that vote until 2018. Mulcair said he would continue to work tirelessly in the House of Commons to defend NDP values as the party searches for its next leader. He also said that his successor would need to have support from 100 per cent of members.

The vote was the climax of a tense convention that exposed divisions within the party between its prairie wings and members from urban cities over the future of pipelines and fossil fuel development. The results also came moments after Mulcair made an emotional plea to NDP members, taking responsibility for the party's crushing defeat in the 2015 election.

“We made mistakes that cost us a victory in October, and for that I take responsibility,” Mulcair told the convention, before they voted.

Nearly 1,700 delegates registered for the convention, the first major gathering for the NDP since the 2015 campaign.

The NDP lost more than half of its seats in the election, moving from official opposition to third party status in the House of Commons. The results left many supporters feeling bitter after the campaign began in August with high expectations. Public opinion polls at the start of the campaign indicated that the social democratic party could win the election, but instead it was Prime Minister Justin Trudeau's Liberal party that won a majority of seats and formed the new government.

Party supporters blamed Mulcair and senior NDP leadership for being too cautious in their campaign. They said he allowed the Liberals to position themselves as the alternative to the Conservative government led by former prime minister Stephen Harper.

Senior NDP officials later admitted that the Liberals had successfully portrayed themselves as a more progressive party by promising to run deficits, while the NDP had campaigned to balance the federal budget.

A lawyer by training, Mulcair started his political career as a provincial Liberal in Quebec's National Assembly. He became the environment minister in 2003 under former premier Jean Charest's government. But he resigned from cabinet in 2006 and later left the party over a dispute about Charest's plans to privatize a portion of a provincial park in Quebec's Eastern Townships region.

Mulcair would then join the NDP in 2007, winning a by-election in a Montreal riding and becoming the first New Democrat to win a Quebec seat in a general election in 2008.

He told delegates that creating inroads for the NDP in Quebec was the most important political achievement of his political career. His victory in 2008 set the stage for the late Jack Layton's stunning breakthrough in the province, three years later, when the NDP won 59 out of 75 Quebec seats in the 2011 election.

But New Democrats turned away from Mulcair despite his record and his efforts to portray himself as a fighter who would battle the growing gap between Canada's wealthy and its less fortunate.

“Wherever I go, I talk to families who work hard and do everything right, but feel like the deck is stacked against them," he said in his speech, before the vote.

He noted that over the last 30 years, the economy has grown over 50 per cent, but wages have been stagnant and retirement security has “virtually disappeared.”

He also criticized a system that allows business executives from large companies to earn 200 times more than the average worker and use their stock options to avoid taxes. All this is happening while many Canadians are working 40 hours a week and living in poverty, he said.

“That is not right,” said Mulcair.

He said that the Liberals and Conservatives accept this as “just the way things are. They will say this is the inevitable outcome of market forces, that nothing can be done."

“Well, allow me to be blunt,” said Mulcair. “This is complete and utter BS."

By signing trade deals “that kill jobs,” by allowing corporations to handle tens of billions of dollars in “tax giveaways” to CEOs and big banks, as well as cutting social services, Mulcair said the Liberals and Conservatives were choosing not to help Canadians.

Prior to the leadership vote, delegates also accepted a motion to pursue a review of the Leap Manifesto - a policy document that calls for a rapid transition away from fossil fuel development and other major economic changes. Many New Democrats from Alberta, including Premier Rachel Notley, expressed concerns that the document would be used by rival Conservatives and Wildrose members to attack the NDP.

But delegates ultimately voted to accept the proposal. This means that NDP riding associations are required to debate the manifesto's proposals with their local members.

Gil McGowan, president of the Alberta Federation of Labour, told delegates that he endorsed some of the ideas in the document but feared that it would open the NDP up to attacks from its opponents.

"Do not hand and tie a mill stone around the neck of our leaders in Alberta," said Gil McGowan, president of the Alberta Federation of Labour.

“In politics sometimes things become symbols and not policies, and that is what has become of the Leap Manifesto,” McGowan said.

As if on cue, Alberta's main opposition party immediately pounced on the opportunity.

“Premier Notley sold her carbon tax, coal industry shutdown and a cap on oilsands development to Albertans with the promise that it would provide the credibility we need to get opponents of pipelines on board – that these policies would get ‘social license,’" said Wild Rose party leader Brian Jean in a statement. "Today Premier Notley's social license experiment was put to the test and it failed. She wasn't able to get her own party’s delegates, in her home city, to drop their opposition to getting Alberta’s resources to market."

But author and longtime NDP supporter Avi Lewis, one of the lead supporters of the manifesto, argued that New Democrats needed a debate to "kickoff" its efforts to tackle major issues such as climate change, energy, and fiscal policy.

Despite the divisions within the party, Mulcair urged delegates to work together.

“We need a strong united NDP, now more than ever,” said Mulcair in the speech delivered prior to the leadership vote.

NDP riding associations back Leap Manifesto ahead of party convention