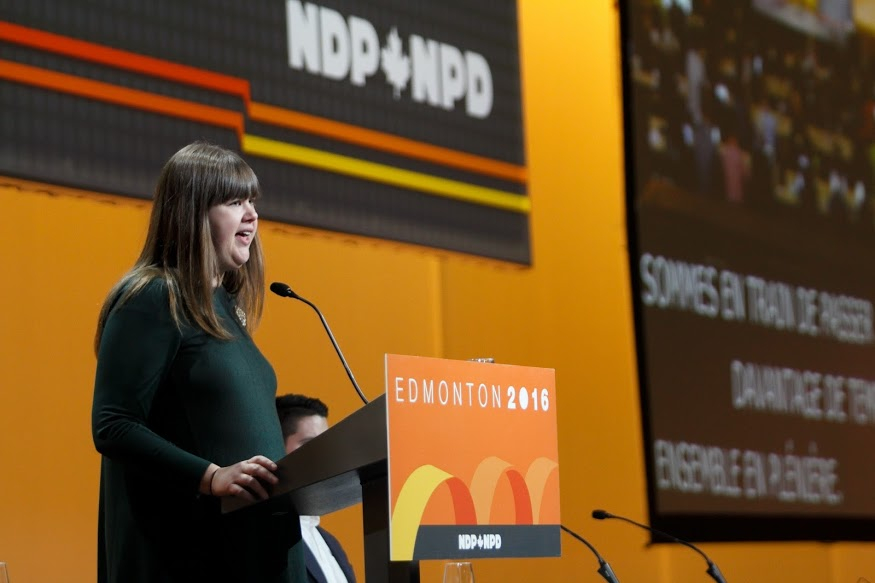 EDMONTON-Dramatic accusations of “betrayal” spilled onto the floor of a political convention Saturday as Alberta New Democrats defended their environmental record and sought to fight off anti-oil sentiments coming from the rest of their federal party.

The federal New Democrats are holding their first convention since their disappointing third-place finish in the 2015 general election campaign.

But with the political future of federal leader Thomas Mulcair hanging in the balance ahead of a leadership vote on Sunday, the provincial NDP government moved into convince his caucus not to endorse a policy document that opposes new pipelines and calls for a rapid shift to deploy clean energy infrastructure.

The document, the Leap Manifesto, is among many topics debated by the NDP at the convention.

Alberta Environment Minister Shannon Phillips got in front of the debate about the manifesto by telling federal NDP MPs at their caucus that the document represented a “betrayal” of the Albertans who voted for the NDP last year, the Globe and Mail reported.

We are who we are

Speaking after the caucus, Phillips later told National Observer that her province has the strongest climate change plan in the country - introduced last November. So it intends to support new pipeline infrastructure that will allow its oil and gas industry to export its products, she said.

“Alberta has the right to develop its resources,” said Phillips in an interview. “We don’t have anything to negotiate about that. We are who we are.”

The plea was accepted by some New Democrats, including its only Alberta MP, Linda Duncan, a long-time environmental advocate, who thanked Phillips for making an “inspiring” speech.

“The Leap Manifesto is coming from people who aren’t exactly part of the party,” said Duncan, who represents the federal riding of Edmonton-Strathcona.

However, she added “people need a wakeup call,” since shipping oil through pipelines is safer than by rail.

Superpower for the 21st century

Avi Lewis, a journalist and writer with deep New Democratic Party roots, told National Observer on Friday, that he and other members were still working to win over the NDP prairie section about their proposal regarding the manifesto. It calls for the party to debate each section of the document, and not necessarily to adopt it in its entirety, he said.

He added that Alberta is rich in solar, wind and geothermal resources and should start exploiting them.

“Alberta should be spending money on becoming the superpower for the 21st century not the 19th century,” said Lewis.

Although he noted that the manifesto said nothing about keeping oil in the ground, Lewis said it doesn’t make sense to build pipeline in Canada, if the country wants to tackle climate change.

“We have no choice, but to transition out of oil,” said Lewis, who added that the scientific consensus is that Canada need to be out from fossil fuels by 2050 if it wants to avoid the worst of climate change.

After it spent two months trying to convince people in the election campaign that the NDP would not shut down the oilsands, Liam Sparks-O’Neill, an Alberta delegate from Edmonton, said that adopting the manifesto would make New Democrats look like “liars.”

He said that delegates from Toronto, Montreal and Vancouver were promoting the document, but that the majority of the prairie caucus was against it.

The prairie New Democrats believe the document was hypocritical since it doesn’t single out auto manufacturers in Ontario for producing polluting cars, or the aluminium industry in Quebec, or the construction of the Site C hydroelectric project in British Columbia.

“This is seen as an attack in Alberta,” said Sparks-O’Neill. “Many will be happy if it doesn’t pass.”

Jose Morales, an NDP delegate from Saskatoon—Grasswood in Saskatchewan, said the Leap Manifesto was bringing many ideas to the table, and “we accept to discuss these ideas, but not to accept the manifesto right away.”

Phillips, the Alberta environment minister, later rejected suggestions that there was a major division within the NDP, saying on her Twitter account that it was nothing new for a provincial section of a party to disagree with some policies at a federal convention.

The convention is also becoming a major test for Mulcair who faces a leadership review vote on Sunday.

"A lot of pressure for a Sunday speech. It's probably going to be the most important speech of my political career," Mulcair said in an interview broadcast on Saturday with CBC's The House.

Paul Dewar, former NDP MP for Ottawa Centre - defeated by Liberal Catherine McKenna in the last election - said the party needed to do a better job of listening the the population.

“We need a way to hear from the ground, from the grassroots to inform our central campaign so we can actually be able to me nimbler,” Dewar said. “It’s about our culture in the party we have to open more.”

The party started the last election campaign in the driver's seat, with many polls suggesting they could win, but instead finished a disappointing third, losing official opposition status to the Conservatives and well behind the Liberals who won a majority government.

Hassan Yussuff, president of the Canadian Labour Congress - an umbrella organization representing unions across the country - said that the labour movement was “profoundly disappointed” with the party’s election results.

The labour movement has traditionally been one of the NDP's strongest allies. But instead of celebrating victory, “we find ourselves at a crossroad at this convention,” said Yussuff on Friday. “I can tell you it has been painful to see our efforts wasted.”

Alberta NDP Premier Rachel Notley was also scheduled to address delegates at the convention on Saturday.

Alberta NDP at odds with Mulcair over future of resource development