The house that Britco built 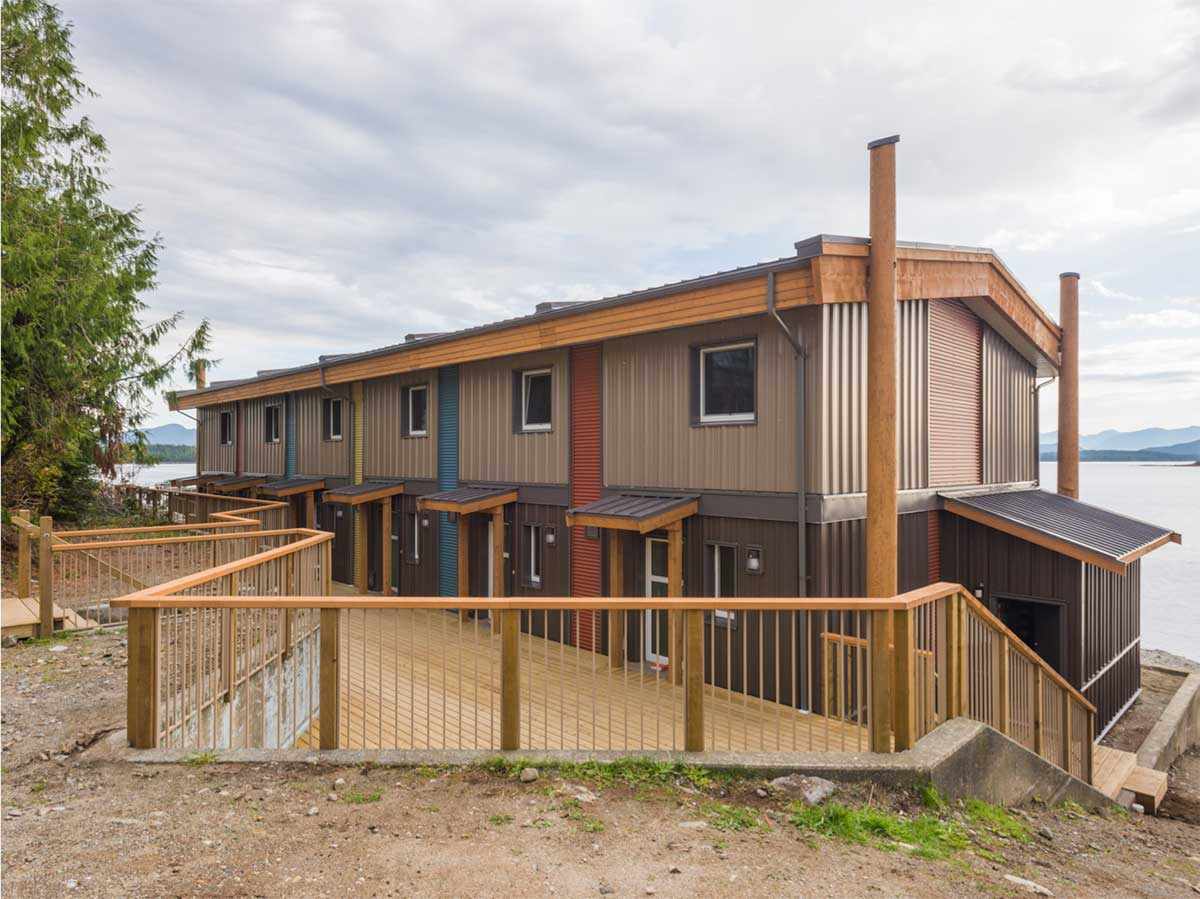 These houses were built for hospital employees in Bella Bella, in the Heiltsuk First Nation on British Columbia’s remote central coast. Photo courtesy of Britco.
Previous story
Next story

If you’ve ever doubted that Canada can reduce its reliance on oil and gas industries and create new opportunities in the low-carbon economy, then you need to meet Craig Mitchell, the sales director for Britco.

“We’ve never been shy to take on something new, but if someone had come to me a year ago, and asked me, ‘What do you know about the passive house standard...?’ Well, I would have looked at them blankly,” he says.

If you’re drawing a blank, too, no worries; stay with me.

Britco is best known for building and renting the orange-topped trailer offices seen at construction sites, mines, and oil-sands projects across Western Canada. It fabricates the modular buildings inside a pair of 125,000-square-foot factories, one in Agassiz, 100 kilometers east of Vancouver, and another near Penticton, B.C. (The company also has a plant in Texas.)

Until recently, when the price of oil hit the basement, Britco’s factories were running full tilt, cranking out dormitories and other buildings for Alberta bitumen projects.

“A lot of that work [was] clawed back,” Mitchell recalls.

But in the first week of January 2015, the phone rang, and it was Peter Treuheit of Mobius Architecture on the line.

The Vancouver Coastal Health Authority had just issued a request for proposals. The agency needed six new apartments for its hospital employees in Bella Bella, in the Heiltsuk First Nation on British Columbia’s remote central coast.

Monte Paulsen, managing director of Red Door Energy Design, and a friend of Treuheit, happened to know it very well.

Passive house is perhaps the least appreciated and most exciting high-performance building standard, because it is simple and cheap, says Paulsen. “It’s a dumb building made smarter. It’s a building with a big sweater on it, and the sweater is so thick that the building doesn’t need a furnace or a boiler.”

Thanks not only to insulation, but also very careful attention to sealing, ventilation, and triple-pane windows, the heat of the sun—or even the body heat of the people inside—is enough to keep a passive house comfortable year-round.

All told, an average passive house consumes only about one-tenth of the heating and cooling energy of a standard Canadian home.

Treuheit had spotted the Coastal Health invitation, called Paulsen, and, agreeing that modular building would be the key to making it work, together they approached Mitchell.

By the end of that first week of January 2015, the team, which also included Spani Developments and RDH, submitted a proposal. By March, they had the gig. They would build the townhomes in the factory in Agassiz, barge them up the coast, and plunk them on a foundation in Bella Bella.

The first challenge was the deadline. The health authority wanted the homes built in six months, Mitchell recalls. “It was an unbelievable timeline, as a Passive House typically takes two years,” he says.

The team set to work training Britco’s workers on a whole new way of building. Britco built a mock-up wall and taught the crews how all the pieces of a Passive House fit together.

“There are a lot of details in a Passive House that you can accommodate in a manufactured environment; [for example,] you are able to do air testing in a controlled setting,” says Mitchell. “Then there’s the speed. You save 30 to 40 percent of construction time by building in a factory.”

Within nine months of the request for proposals, Bella Bella’s hospital workers were moving into their stylish waterfront townhomes. On the coldest nights of the year, this past winter, each of units required just 600 watts—the equivalent of six old-school light bulbs, via a tiny backup heater—to keep their occupants cozy.

Meanwhile, the reviews are in. “So far, the only complaint I have heard [from residents] is that we haven’t got them all their furniture yet,” says Brett Crawley, the facilities leader at Vancouver Coastal Health who commissioned the work.

“I was up there in November, and [residents] had the windows open,” adds Crawley. “There have been no issues, they love the way they retain the heat, the insulation gives them a good sound barrier, and they love the look.”

As for cost, Mitchell and Paulsen agree that passive buildings carry a roughly five percent price premium over traditional dwellings that are constructed to the bare-minimum building code, and which of course cost much more to heat.

Mitchell now hopes to repeat the Bella Bella experience elsewhere; the company is already in talks with a number of other First Nations. He hopes he can help replace the typically dilapidated, inefficient houses found in many remote indigenous communities with stylish, cost-effective, and über-efficient modular homes.

“It has opened the eyes of a lot of us,” says Mitchell.

Paulsen is not only on the same page, he’s thinking even bigger. Canada is home to about 175 remote, off-grid indigenous communities, he says. Nearly all of them run on noisy, polluting, and expensive diesel generators. The housing stock, to be generous, is crap.

In Paulsen’s vision, companies like Britco would replace those dilapidated, drafty, mold-ridden buildings with über-efficient modular Passive House buildings, assembled in factories. On completion, the builders would barge or truck them to reservations, drop them onto pre-poured foundations, and finish them on-site with labour trained in and hired out of of the communities that would receive them.

“As soon as you [start this project], Canada becomes the global leader in Passive House housing,” imagines Paulsen. “Suddenly, we are in the global game—using Canadian made heat-recovery ventilators and triple-pane windows.”

“You would also create a huge number of Aboriginal jobs and training opportunities, in urban areas, at the factory, and on the reserves.”

And if you can put these buildings on a barge, or put them on a ship, he figures, you can export them—not only to remote communities, but to China or Japan. “You end up with a Canadian passive-house manufacturing and export economy,” Paulsen says.

But while Britco will be ready to nail together new oil-sands housing if and when the need arises, it has clearly started down a new and exciting path.

“To build a better sustainable business, we can’t rely on oil and gas as a key focus,” Mitchell says. “If the demand [in that sector] is there, we will do it. But we can’t keep having the peaks and valleys of revenue go up and down, like in the oil and gas sector. We want to avoid that volatility.”

So do many others. And in a post-Paris Agreement world, in which we need to reduce greenhouse gas pollution up to 70 percent, Passive House might just be part of the solution.

“For new buildings, at least, this fixes the problem,” says Paulsen. “They are healthier, more comfortable, more durable, with less moisture moving through the walls.”