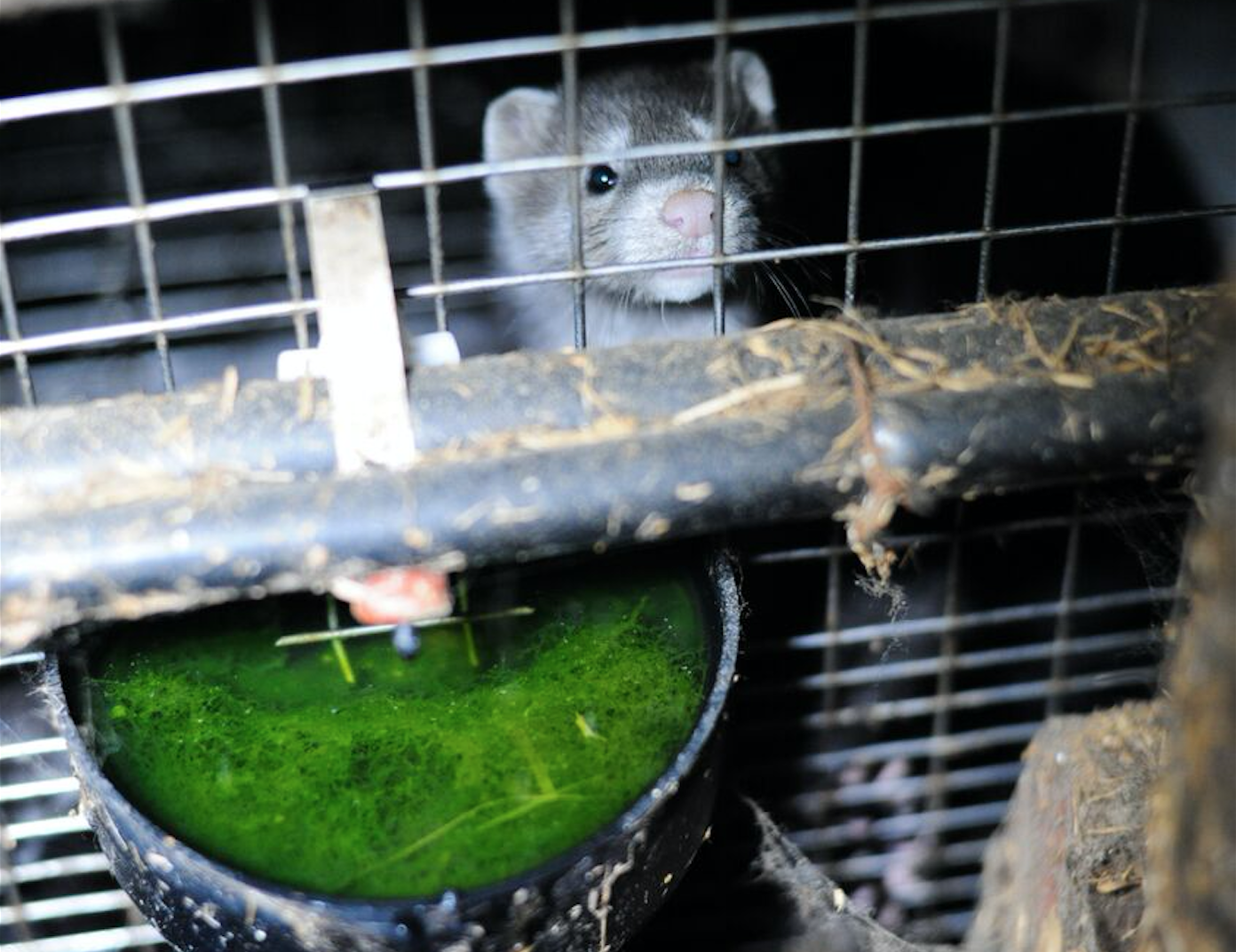 Cruelty and poor living conditions often motivate fur farm "liberations." Above, a mink is found drinking stale, green water on a B.C. fur farm in 2014. Photo courtesy of the Association for the Protection of Fur-Bearing Animals.
Previous story
Next story

To free or not to free? That is the question splitting animal rights activists across North America in the pursuit of a world absent animal cruelty.

For generations, animal “liberations” from fur farms, slaughterhouses, private pastures and more have been a classic calling card of the animal rights movement — a form of sabotage that has racked up hundreds of millions of dollars in damages for business across the continent.

From the perspective of the law, the verdict on such releases are clear: liberations constitute theft and their perpetrators are subject to criminal charges. But the question of whether they are ethical within the animal rights movement itself recently surfaced when up to 500 mink were set loose on a southern Ontario fur farm.

A danger to local ecosystems

"Releases come at a big environmental consequence," said Lesley Fox, executive director for the Association for the Protection of Fur-Bearing (APFA) based in Vancouver, B.C. “When these animals are released, in some cases, you're letting tens of thousands of mink into a very small concentrated ecosystem, which upsets the natural balance of animals living in this ecosystem."

Last month, a group called the Willow Pond Mink Freedom Movement claimed responsibility for an overnight liberation at a Brant County fur farm, knocking over nest boxes and freeing hundreds of mink from their cages. Local media reported the thieves escaped through holes cut in the barn walls, and so far, no charges have been laid.

But farmed mink commonly suffer from a deadly, untreatable, and extremely contagious illness called Aleutian disease, Fox explained, that can be transferred to wild animals through shared food, water, feces, urine or saliva. Releasing sick animals into the wild is never a good idea, she said, although she understands the thinking behind liberations:

“If even one of those animals survives, it’s one more than would have survived if it were on that farm, where they’re all going to be gassed to death,” she told National Observer. "But if there were a plan to take them to a sanctuary or transport them to a safe location, to me that makes a lot more sense than to simply release them on their own into the wild.” 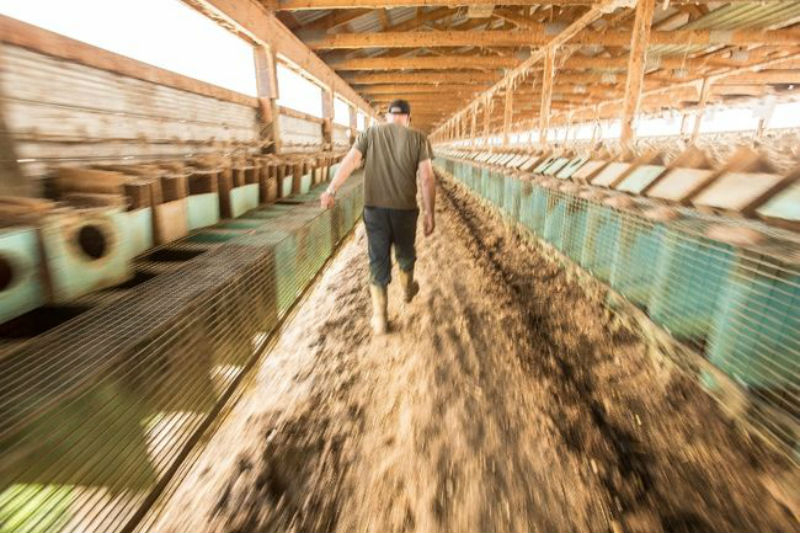 More than 6,000 mink were released by animal activists at this farm in St. Marys, Ont. in July 2015. Photo by Canadian Press.

A danger to other domesticated animals

In the case of the mink release in Ontario in April, many of the animals freed were also nursing mothers, whose young will likely die on the farm without them. It’s a factor the activists might not have considered, said Marianne Patten, president of the Canada Mink Breeders Association (CMBA), when they decided to steal private property.

"We are shocked that any person or group would commit such a cruel and irresponsible act," she said in a press statement at the time. "Their newborn kits are all under two weeks old – some are only days old – they are completely dependent on their mothers for warmth and frequent feeding at this stage."

In addition to the premature deaths of many young mink, released predators like mink are also notorious for causing problems for other livestock. In October 2013, more than 500 freed mink from a B.C. fur farm gobbled up nearly 100 of baby ducks from a nearby farm in a "vampiric" serious of mini-attacks.

"These criminals don’t think that people have a right to use animals, fine, but these are domesticated animals that have been raised on farms for more than 100 generations," said Kirk Rankin, an Ontario mink farmer and former CMBA president, in the release. "They cannot fend for themselves in the wild, so most will die, and the few that do survive will endanger domesticated ducks or chickens in the region."

Yet despite facing criminal charges, the collective wrath of farmers, and being lumped in the same category as "eco-terrorists" and “right-wing extremists” as a “serious domestic terrorist threat” by the FBI, many animal rights activists stick to the practice of liberations. Perhaps the most infamous example is the international Animal Liberation Front (ALF), which has single-handedly committed more than 1,000 criminal releases since the 1970s and operates in more than 30 countries worldwide.

While the ALF is less of an organization, and rather a name adopted by independent animal rights activists who break lab equipment, release animals, and offer sanctuary and veterinary care, their actions are neither condemned or condoned by other rights groups like PETA (People for the Ethical Treatment of Animals), based in the U.S. The famous organization credits the ALF for providing "proof of horrific cruelty that would not have been discovered or believed otherwise," but when it comes to the subject of liberation, prefers to side with the law.

"When the law does so little to protect animals from a horrifying life of misery on fur and factory farms and in laboratories, it's not hard to understand why some people take matters into their own hands and free animals from cruel confinement and abuse," it said in an email to National Observer.

"We all have to look within our own conscience and determine what we can do to reduce cruelty to animals, including simple things such as choosing animal-free clothing, food, products, and forms of entertainment. PETA operates within the law... to open people's eyes, hearts, and minds so that they realize how many kind, perfectly legal choices they can make that will save animals from suffering."

It's a position echoed by Mercy for Animals in Canada, which also a law-abiding organization, but refused to scold the work of controversial animal liberationists.

"As people who have witnessed first hand the horrors animals endure on factory farms — in which animals are stuffed in tiny cages, mutilated without painkillers and violently killed — it should come as no surprise that some individuals may feel a sense of urgency to liberate the victims of such merciless oppression," wrote managing director Krista Hiddema in a statement.

The ethical issues of animal liberations runs deep, said Fox, who suggested that despite resulting in more free creatures, the practice makes the work of law-abiding animal activists a little more difficult.

"It certainly makes it challenging, but in a sense, I think it’s part of this movement," she explained. “In some ways, I think radicalism, or whatever you want to label it as, is part of social progress. These people are sending a really loud message that animal abuse won’t be tolerated and these are the extreme measures they’re willing to go to."

In many cases she added, it does shut down fur farms, which struggle to recover from the financial losses. Patten said the fur-farming industry is careful to separate such extremists from diplomatic, above-ground animal welfare advocates like APFA and PETA.

"Personally, I look see it as two sides of the coin," she explained. "There are animal welfare people, whom I consider quite legitimate and concerned about the welfare of the animals, and there are animal rights people, who are a whole different kettle of fish.

"They’re the ones undertaking these irresponsible acts. The animal welfare people — we’re quite willing to sit down and work with them, and we have quite good working relationships with them."

More than 60,000 Canadians work in various sectors of the fur industry across the country, including trappers, farmers, and crafts people. In November 2015, National Observer published a special report on the plight of fur-farmed mink and fox across Canada.