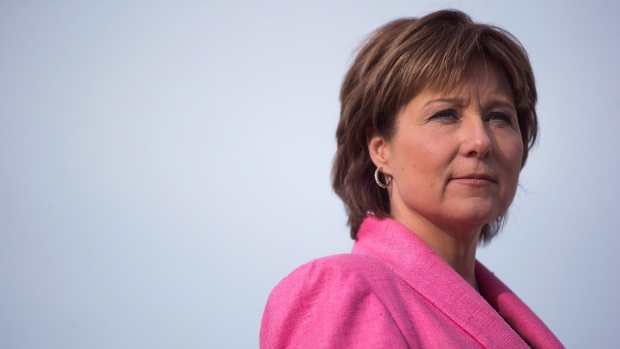 B.C. Premier Christy Clark on May 7, 2016. File photo by The Canadian Press.
Previous story
Next story

Climate scientist and British Columbia Green Party Leader Andrew Weaver says the province's premier is being "utterly bizarre" about global warming in the wake of the Fort McMurray wildfire.

Premier, Christy Clark had linked Alberta's raging wildfire to global warming, in a recent radio interview, but then she promoted the province's liquified natural gas industry as a potential solution to the problem.

"Last week the premier commented on the wildfire situation in Fort McMurray," Weaver said on Thursday. "Remarkably, she used the disaster as an opportunity to point out the importance of investment in the oil and gas sector."

He added that Clark was “using every opportunity to promote fossil fuel development" in the province.

"While the scientific community has understood the link between global warming and the increasing occurrence of large wildfires for quite some time, the premier’s statement is utterly bizarre," he said. "It’s about time that this government level with British Columbians and point out that developing an LNG industry in B.C. is simply not compatible with climate leadership."

Clark countered that even though Canada committed to getting off fossil fuels altogether, “we are not there yet.” Therefore, the second best alternative is to generate a transitional fuel — LNG — to supply energy-craving markets such as China that, otherwise, would turn to much dirtier coal.

“Around the world today there are 1,000 coal plants on the books, ready to be built, 150 of them in and around Beijing, in China. The only way that those coal plants will be prevented from being built is if they have an alternative source of energy,” Clark said.

But Weaver hit back, alleging that while it would reduce coal emissions abroad, LNG production would drastically increase the Canada’s own greenhouse gases. “When its full life-cycle is accounted for, LNG is just as bad coal,” he said, and added that Clark “fails to grasp that we can’t claim credit for shipping a ‘cleaner fuel’ when we also ship millions of tonnes of coal out of B.C.”.

The Green MLA said that the Clark government was putting the province on a path to fail on its climate change goals.

Here's the video of the exchange between Clark and Weaver.