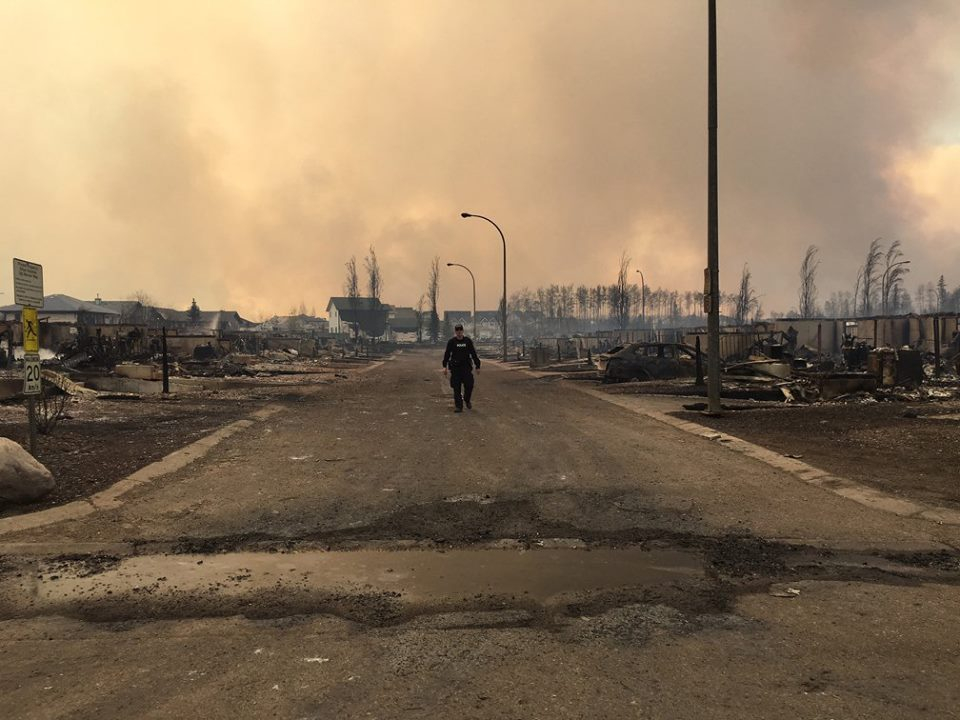 A mountie stands on a deserted Fort McMurray street. File photo from the RCMP
Previous story
Next story

Weeks after their dramatic escape from a raging wildfire, thousands of displaced Fort McMurray residents are being told that they could start returning to the city as early as June 1.

Stressing that this was a voluntary plan, Alberta Premier Rachel Notley said the re-entry would depend on five conditions: The wildfire must no longer threaten the community, critical infrastructure is able to provide basic services, hazardous areas are secured, and “local government is re-established.” Officials must also restore essential services — emergency medical, law enforcement and health care — to a basic level before re-entry is possible.

“We need to address all of them before it is safe for residents to return,” Notley said at a news conference in Edmonton.

The Alberta government expects the hospital to provide basic care by June 1. Natural gas service is expected to return by the same date.

But other services may not be fully restored by then. Notley said residents should bring re-filled prescriptions, non-perishable foods, and other emergency gear to keep themselves safe. The hospital won’t offer long-term care, ground and air will be available. Boil water advisory will remain in effect until near the end of June.

The wildfire forced around 88,000 people from their homes on May 3 after a government-ordered evacuation — the largest in Alberta's history. The blaze has grown considerably since then. It now covers about 423,000 hectares and is still burning out of control.

In the past week, some areas flared up near oilsands work camps, forcing new evacuations in areas where companies were starting to reintegrate their workforce into the region.

The proposed re-entry would occur over four days from June 1–4. Under the plan, residents of the lower town-site — Anzac — and First Nations communities are allowed to return on the first day, with greater-devastated areas tentatively scheduled for re-entry in the following days.

“This re-entry plan is voluntary," Notley said. "It’s a matter of allowing those people to return on a voluntary basis in a phased and cautious way.”

The fire has destroyed around 2,400 buildings, including the majority of homes in the neighbourhoods of Beacon Hill and Waterways. Evacuees made their way to nearby oil camps, or found refuge in Edmonton and Calgary, among other towns. The University of Calgary currently houses around 1,200 evacuees, while the University of Alberta provided refuge to around 1,000 evacuees in its residence buildings. Thousands more are lodged in schools and community centres throughout the province.

"We will rebuild our city and it will be better," says Wildrose Leader Brian Jean, fighting back tears at the news conference.

Jean, a Fort McMurray resident whose own home was burned down in the blaze, thanked Notley's government for keeping him updated about the ongoing provincial response to the emergency.

While essential infrastructure including water treatment facilities, the hospital and airport, survived the fire, a Bank of Montreal analyst estimated that insurance claims could climb as high as $9-billion.

Notley said that some of the factors regarding the re-entry might change, but that it was important to give people timelines to help them plan. She said residents with breathing difficulties, in high-risk or late-term pregnancy, and cancer patients should not return to the city.

The government signaled an assessment of their re-entry plan following an explosion that occurred late Monday night and which damaged 10 homes.

Poor air quality is also a factor. Officials said that the air toxicity in Fort McMurray climbed as high as 51 on a scale of one to 10 — with 10 being the worst — earlier on Wednesday before dropping to 11. Restoration on the hospital was stalled due to poor air quality.

“We are making our decisions based upon the advice of the most informed and educated officials in the country,” Notley said.