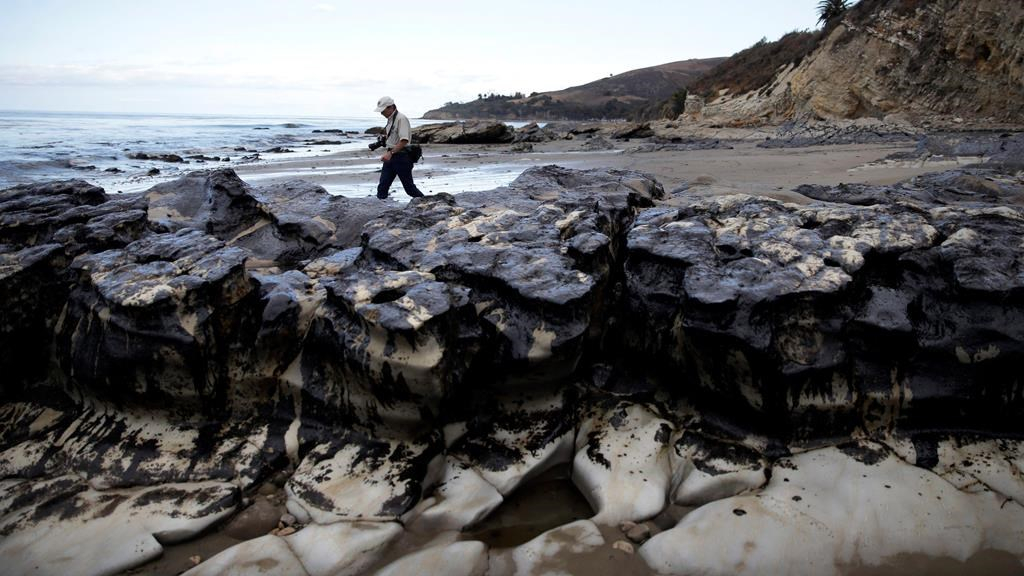 Plains All American Pipeline oil spill on the California coast in May, 2015. File photo by Associated Press.
Previous story
Next story

An oil pipeline company responsible for a massive spill on the California coast a year ago didn’t do enough to prevent corrosion and its operators didn’t detect and react to the spill quickly enough, federal regulators said Thursday.

Plains All American Pipeline also didn’t have adequate systems in place to signal there was a major leak in the pipeline running near the Santa Barbara County coast, the Pipeline and Hazardous Materials Safety Administration said in its final investigation report.

"The operators failed on multiple levels to prevent, detect and respond to this incident," agency Administrator Marie Therese Dominguez said. "A number of preventable errors led to this incident and the company’s failures in judgment, including inadequate assessment of this line, and faulty planning made matters worse. What happened is completely unacceptable and we will hold the company accountable."

The report was issued on the one−year anniversary of the 120,000 gallon spill and just two days after the company was indicted in Santa Barbara County Superior Court on dozens of criminal charges, including four felonies of polluting state waters and three dozen misdemeanours of harming wildlife.

Beaches along the scenic coast nearby were closed two weeks shy of Memorial Day weekend as an oil plume spread nine miles into the Pacific Ocean. They remained closed for weeks in the aftermath as oil from the pipeline washed up more than 100 miles away in Los Angeles County and more than 220 birds, such as pelicans, and nearly 140 marine mammals, mostly sea lions, died.

The agency previously said severe corrosion led to a 6−inch gash in the 2−foot−wide pipe, but the final report goes into greater depth about failures to detect and prevent that corrosion and also operator error in recognizing the leak.

Plains, which remotely operated the pipeline from a control centre in Midland, Texas, did not initially detect the spill after a series of pump failures and a severe drop in pressure on the pipeline eventually led to a shut down.

The agency said alarms that should have been triggered by changes in pressure didn’t sound to alert staff to a problem and a leak detection system that also would have sounded an alarm had been disabled by an operator who was dealing with an unrelated problem. Failing to detect the leak, the controller even restarted the line after the spill occurred.

Houston−based Plains has apologized for the spill and said it was an accident that does not merit criminal charges. The company said it wouldn’t comment on the report because of ongoing investigations and pending lawsuits.

Regulators are now focused on whether the company violated federal pipeline safety regulations, which could lead to fines and criminal charges by federal prosecutors, who are looking into the case.

Dominguez declined to discuss possible penalties Plains could face, but said her agency would soon issue an industry advisory on lessons learned from the disaster.

The report said the costs from the spill through the end of last year were estimated at $143 million, though the company reported in its annual report that it expects that figure to rise to $269 million.

The spill was the largest on the U.S. coast since the 2010 BP Deepwater Horizon explosion. While the Plains spill was just a fraction of the size of the disaster in the Gulf of Mexico, which killed 11 workers and spilled millions of gallons, it happened on hallowed ground for environmentalists.

A blowout on an offshore rig in the Santa Barbara channel in 1969 blackened the shores and gave rise to the environmental movement, which is frequently at odds with the oil industry’s presence throughout the area.

"The Santa Barbara community has dedicated itself to learning from that (1969) tragedy and working to ensure it does not happen again," Rep. Lois Capps, D−California, said. "As we know, no community is immune. And 46 years later, I found myself once again witnessing the devastation of an oil spill on the Central Coast, this time at Refugio Beach."

The leak was discovered after firefighters responding to reports of a petroleum stench found oil spilling from a ravine onto Refugio State Beach, a pristine and popular park for swimming and camping.

Multiple class−action lawsuits from landowners, fishermen and business owners who say the spill crippled a thriving tourism industry are still pending. Some investors have filed suit alleging they were misled about the integrity of company pipelines.