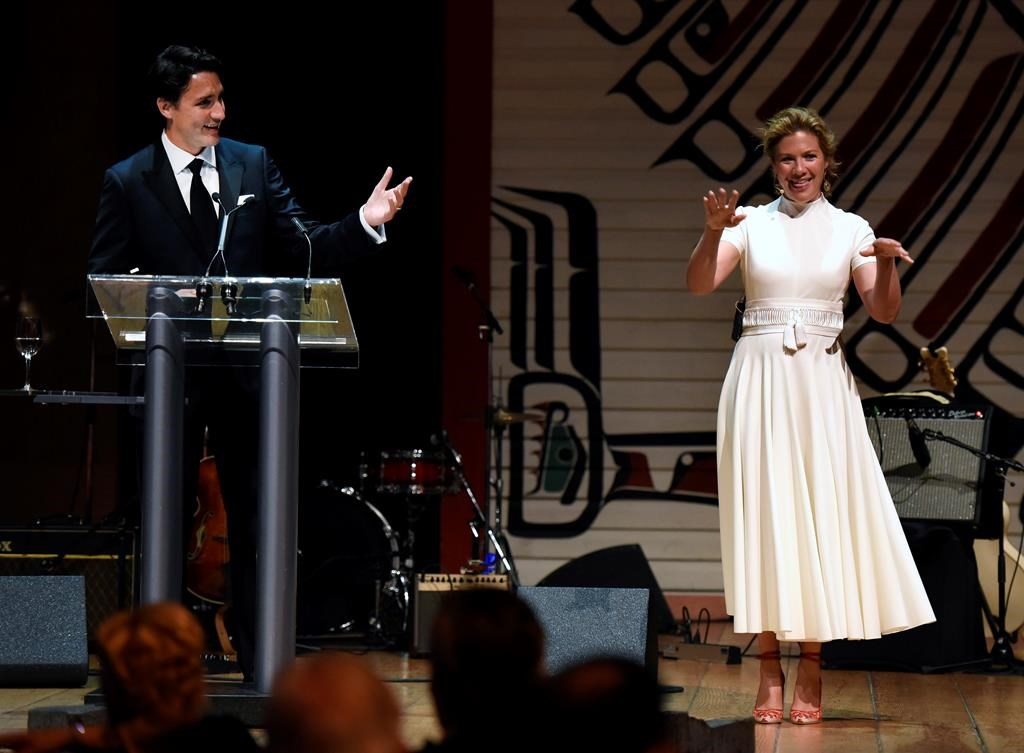 Prime Minister Justin Trudeau and Sophie Grégoire Trudeau put on a skit for the Ottawa press corps on Saturday, June 4, 2016 in Gatineau, Que. Photo by The Canadian Press.
Previous story
Next story

Politicians and journalists threw aside political correctness this weekend and went all out for the 150th anniversary of the Canadian Parliamentary Press Gallery.

Every year, the journalists and politicians mingle at the annual dinner, which is lightheartedly referred to as the "nerd prom." Generally each journalist who attends must invite a guest, normally a politician - but there aren't any hard and fast rules, apart from dressing up for the black-tie gala.

The leaders of the main political parties are normally expected to show up and roast themselves with a satirical speech. They also throw in a sprinkling of inside jokes, sometimes using the event to settle old scores.

This year marked the first time in more than a decade that a sitting Canadian prime minister decided to attend. Former prime minister Stephen Harper had boycotted the gala since 2005 due to his frosty relations with the media - or perhaps his overall dislike for other humans, as interim Conservative Leader Rona Ambrose put it.

So in this edition, Prime Minister Justin Trudeau and his wife, Sophie Grégoire Trudeau, took to the stage with their own skit. It included a musical number with Sophie singing the blues, doing some yoga, and then engaging in the usual self-deprecating humour.

Ambrose brought down the house with a sensational performance that had most of the crowd in stitches.

Not to be left out, NDP Leader Thomas Mulcair delivered no-holds-barred criticism of pretty much everyone in sight, admitting that he gave "zero f**ks" about the consequences since he would be leaving politics, after being shown the door by his own party.

Green Leader Elizabeth May was out West at a party event and steered clear of the gathering - after some harsh criticism from journalists last year who mainly thought that she wasn't funny enough.

In chronological order, here are the top 15 jokes from the 2016 edition of the Parliamentary Press Gallery annual dinner as Canada celebrates 150 years of a free press covering its national government:

My prom date for #gala150, the lovely and talented Craig Oliver. @CTVNews pic.twitter.com/k2sNkzQn6e

Great time had by all at #gala150 - thanks for the invite @josh_wingrove ! pic.twitter.com/ntL32FPJGa

Thanks to @mcornellier for bringing me to tonight's Parliamentary Press Gallery #Gala150. pic.twitter.com/uzwmjCAIw9

A PM speaking at a #nerdprom? Never! Except when it's @JustinTrudeau ! #gala150 pic.twitter.com/wInagVPrqV

At the press gallery dinner #gala150 with @Justin_Ling from @VICE #cdnpoli pic.twitter.com/5ZnslEbWSm

Hannah Thibedeau and I at #gala150 pic.twitter.com/4YTjqtE4Tn