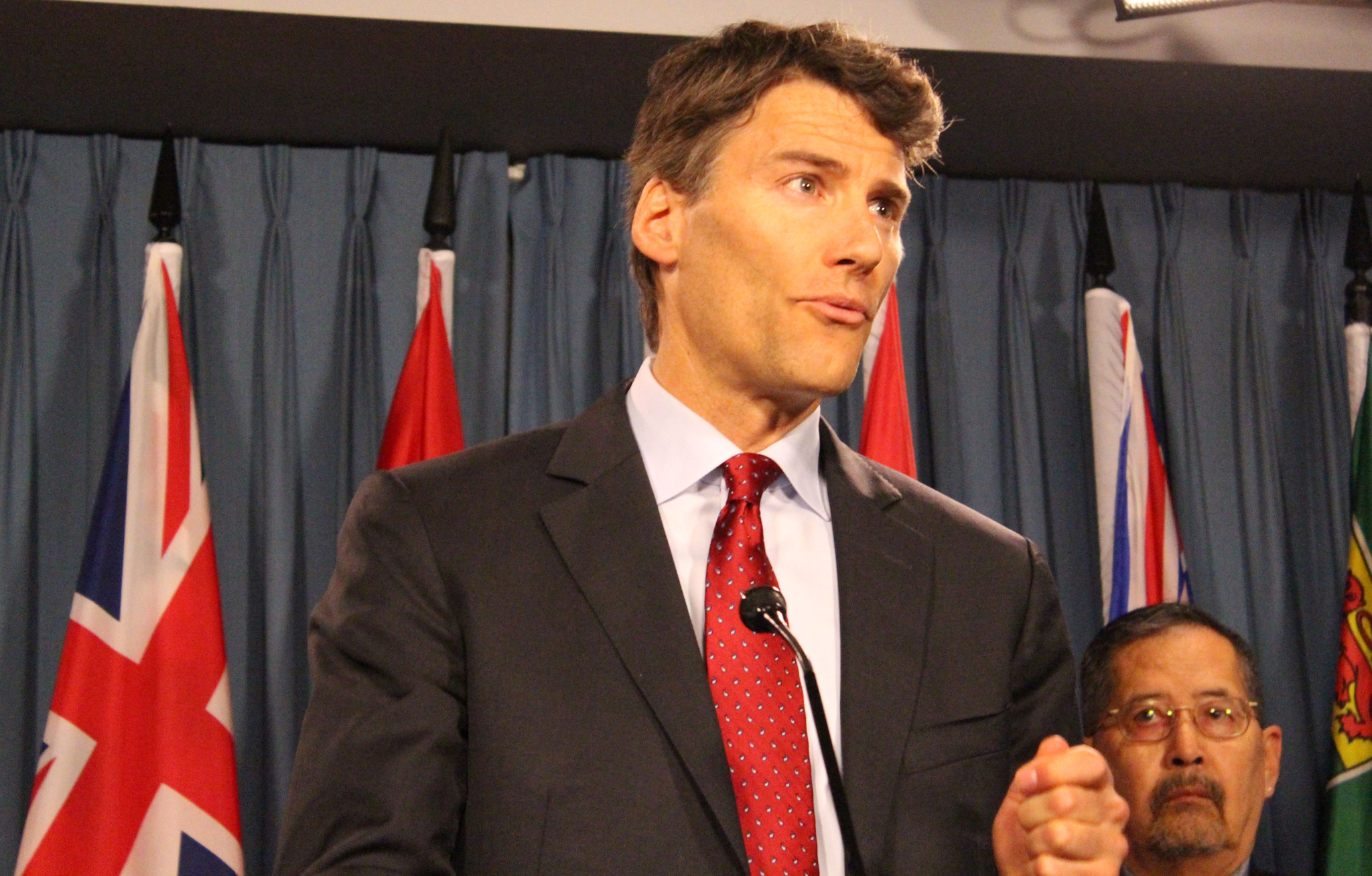 Plastic buckets and large tanks that were meant to simulate the Vancouver coast could soon become part of a new legal challenge against a major pipeline expansion project that many British Columbian politicians are aggressively trying to block.

As Vancouver Mayor Gregor Robertson brought a delegation of Indigenous leaders to Ottawa on Tuesday to lobby federal politicians to stop the project — a proposed expansion of Kinder Morgan’s Trans Mountain pipeline — Green Party Leader Elizabeth May said she plans to take Canada’s pipeline watchdog to court for conducting what she described as a fraudulent review of the proposed project.

Details of the plastic bucket and tank experiments that Texas-based Kinder Morgan were used as part of the company's application to demonstrate how bitumen — the tar-like heavy oil from Alberta’s oilsands industry — would behave if spilled, and what would be required to clean it up, said May, the federal MP for Saanich-Gulf Islands in B.C.

The experiments used tanks that held 7,000 gallons of water, as well as a fish tank and smaller five-gallon pails, May said.

But the testing did not reflect the reality of the Burrard Inlet, an important waterway on the edge of Vancouver, she argued.

“They filled a tank with water, they stirred in salt, and then they said, ‘When you move it around, it’s just like the Burrard Inlet,’” she explained during a news conference on Tuesday.

Ever since a major oil spill in Michigan from an Enbridge Inc. pipeline, May said officials have known that the bitumen from the oilsands, which would be transported on the Trans Mountain pipeline, is harder to clean up than conventional oil and can cause longer-lasting damage to the environment.

Kinder Morgan did not immediately respond to requests for comment, but the company has described the pipeline expansion as a “critical” project that would create jobs and open up new markets for Alberta’s struggling oilsands producers. Energy companies, bankers and business lobby groups are also aggressively promoting pipeline expansion in Canada as a necessity to build the country’s economy.

This Project is critical to the country and all Canadians #TMEP #kindermorgan pic.twitter.com/IecfQ0v0Oa

The Trans Mountain expansion would triple the capacity of an existing line that now carries up to 300,000 barrels of oil per day. It would also dramatically increase the number of oil tankers shipping the oil from the waterways near Vancouver harbour.

But in terms of its research on spills, May said the Kinder Morgan experiments — accepted into evidence by the NEB pipeline watchdog — allowed water temperatures to warm to levels that would never occur in the marine environment. She said the NEB allowed this evidence to be buried in Kinder Morgan’s 23,000-page application and prevente stakeholders from cross-examining the people who conducted the experiments.

At the same time, she noted that the regulator accepted the company’s objections and agreed to exclude a more credible assessment of the science by the Royal Society of Canada.

This is part of the reason she plans to ask a court to overturn the NEB’s recommendations that the pipeline be approved, she explained.

“This is a really large project to hinge on a one-time-only joke of a study in a tank and they had another one in a plastic bucket, where they lacked a ruler big enough to measure the way the spill moved around in a plastic bucket," May told reporters.

Previous legal challenges against the NEB’s process in the Trans Mountain review have failed, but a number of high profile environmentalists and stakeholders withdrew from the hearings process because they felt it had been rigged in favour of the company.

The NEB said in a statement that it considered all evidence about spills during its review and allowed participants in the hearings to challenge and question all evidence in writing. It added that it could not accept the Royal Society of Canada report as evidence since it was published in November 2015, several months after the deadline for submissions of written evidence.

The federal Liberal government has already accepted that Canadians didn't trust the NEB process, and as a result, it appointed a special panel to review the regulator’s review and make its own recommendations before the government makes a final decision at by December 2016.

Vancouver Mayor Gregor Robertson noted at a separate news conference that the federal Liberals have more than a dozen MPs who were elected in his region and expressed concerns about the Kinder Morgan project during the last election. He said their political future will be on the line if they allow the government to approve the Trans Mountain expansion.

“Vancouver’s economy is really grounded in being clean and green," Robertson said, standing alongside Indigenous leaders from his region. "Our growth is primarily from innovation and the green economy, and we cant put that growth at risk. That growth is helping Canadian jobs be created, it’s helping Canada’s economy.

"We have to make sure that the thousands of jobs that are being created every year in Vancouver continue and are not put at risk by Vancouver turning into an oil port and potential catastrophe with an oil spill in our harbour that wipes out tourism jobs, construction and development jobs, green economy jobs. All of that is at threat with this pipeline.”

Chief Maureen Thomas, from the Tsleil-Waututh Nation, stressed that the opposition wasn't a question of having “naysayers” battling with “yes-sayers.”

“It’s about the survival of the human race,” she said.

"All you have to do is look around the world, look at all the catastrophes that are happening today. Look down at the States, look at Fort McMurray — these things are real and they’re impacted by fossil fuels that affect us every day.”

The Vancouver delegation met with Natural Resources Minister Jim Carr, along with other federal MPs and representatives.

"I had the pleasure this morning to meet with a mayor of a major Canadian city, Vancouver," Carr told the House of Commons. "I have also heard from the mayors of other Canadian cities who hold a different view on pipelines and major energy projects. The sensible thing to do is to establish an independent panel of experts from western Canada to talk to mayors and others who have an opinion, after which the government will decide what it believes to be in the national interest."

How social licence came to dominate the pipeline debate in Canada

By Elizabeth McSheffrey | News, Energy | May 19th 2016
Reports from the Race to a Safer World

We will never move forward if

We will never move forward if we continue with old ways like pipelines , we need to support and put $$ in alternate sources of energy like, wind, solar etc.