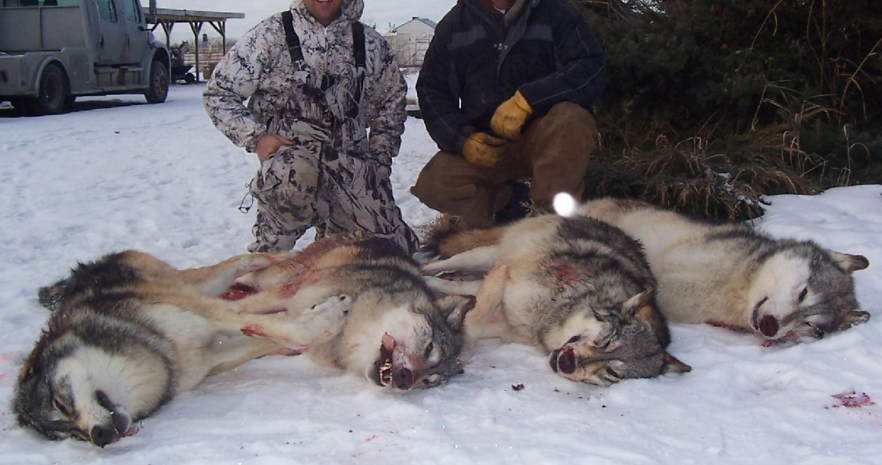 Hunters with a wolves in Alberta. File photo by Geordie Day.
Previous story
Next story

Alberta plans to continue the provincial wolf cull for the foreseeable future, but announced Wednesday that it intends to restore habitat in an effort to ease pressure on the endangered woodland caribou.

Some of Denhoff’s key recommendations include the restoration of over 10,000 kilometres of seismic lines back to caribou habitat in the Little Smoky and A La Peche caribou ranges; and providing permanent protection to an addition 1.8 million hectares of caribou range in the north and western parts of the province.

At the same time Denhoff recommended that the wolf cull continue in the Little Smoky and A La Peche ranges until caribou populations stabilize.

Alberta was required, under the federal Species at Risk Act, to provide a plan to protect the caribou. If it had failed to do so, the federal government could have intervened to introduce its own plan.

“Our government inherited a policy logjam and a looming federal deadline to file our plan to recover the caribou and manage critical habitat for caribou throughout the province,” Shannon Phillips, Alberta’s Minister of Environment and Parks, said in a statement.

“Rather than admiring the problem, as had been done for two decades, our government took action. We rolled up our sleeves and looked for solutions.”

Phillips said Denhoff’s recommendations are based on collaborative science and protecting jobs.”

Over the last 30 to 40 years, the province has had no fewer than 10 separate studies or task forces examine the caribou problem, Denhoff notes in his report, Setting Alberta on the Path to Caribou Recovery.

“This is a story of tough choices,” Denhoff writes.

Caribou protection requires balancing the need for a sustainable economy, the need for jobs, and the necessity to respect Aboriginal and Treaty rights, he notes.

“Ultimately, caribou come first, and federal law requires each province and territory to develop range plans that protect, over time, at least 65 per cent of that habitat or face federal intervention.”

Denhoff believes it’s reasonable in some of the caribous’ range to be able to preserve as much as 65 per cent of the habitat.

In other parts, the “overwhelming level of human activity is so stunningly complete that the complex array of threats mean that even the most aggressive habitat protection measures may fail to assure the survival of the herds.”

Although the cull will continue, Denhoff is recommending an ambitious caribou rescue plan to the province. Besides seismic line restoration and habitat protection, the report calls for a fenced caribou rearing facility, “unparalleled in scale,” where the animals can safely reproduce and raise their calves.

The facility would potentially double local populations within five years.

Pressure would also be eased on industrial use on the lands in a number of ways. A government-backed paid green bond program to energy companies would help offset any revenue loss from restoring the seismic lines.

Energy firms would also be asked to voluntarily scale back “substantial amounts” of energy development until the restoration program and caribou rearing facility are firmly established.

Forestry companies will be asked to “pool” wood fibre outside the caribou ranges in order to limit or prevent harvesting inside the impacted areas.

The plan also calls for the establishment of a monitoring board to keep track of progress with representation from all the affected stakeholders.

The program won’t come cheaply. Restoration of the seismic lines and establishment of the caribou raising facility is estimated at $60-million alone.

Poisoning of the wolves likely to be phased out

Denhoff notes that the wolf cull “excites some of the greatest concern and opposition among the public,” and added that his most challenging finding is that the region’s caribou will not survive unless wolf control continues.

“As habitat recovers over time, it will presumably, eventually—in many years—be possible to eliminate active wolf control on a regular and continuing basis.”

The report says that in addition to caribou the wolves are taking an “extraordinary” number of elk and cites a wolf pack having killed 13 elk in one incident.

Alberta’s wolf cull began in 2005 in the Little Smoky Region of the province in an attempt to save the endangered woodland caribou.

Currently, the province shoots wolves from the air and uses strychnine bait and private trapping to kill the animals. But the report notes that some 20 moose and elk annually are killed from the poison as well.

“In conducting wolf control, society has embarked upon species valuation trade-offs that not everyone is comfortable with,” the report notes.

First Nations representatives told Denhoff that they would prefer to replace the poison with approaches that avoid killing other species unintentionally and have asked for direct participation in the cull.

“Given their traditional knowledge and the direct impact to their rights and traditional use, this is well-advised and should be given consideration,” Denhoff writes

“At the same time, discussion needs to continue to reflect the reality that wolf control using trapping alone has not previously been successful.”

The report says the Alberta Trappers Association has also raised concerns about the use of poison and will be submitting a proposal to government aimed at decreasing its use.

Denhoff notes that even if the entire Little Smoky-A La Peche caribou regions were protected today from all industrial activity, “it would likely be decades before habitat was sufficiently restored to reduce wolf predation on caribou sufficiently, such that the province could eliminate the wolf cull.”

One should beware you are not

One should beware you are not creating another "Wyoming Elk Feeding Grounds" where disease and Chronic Wasting Disease, or some other new disease is introduced into your unnatural breeding farms.