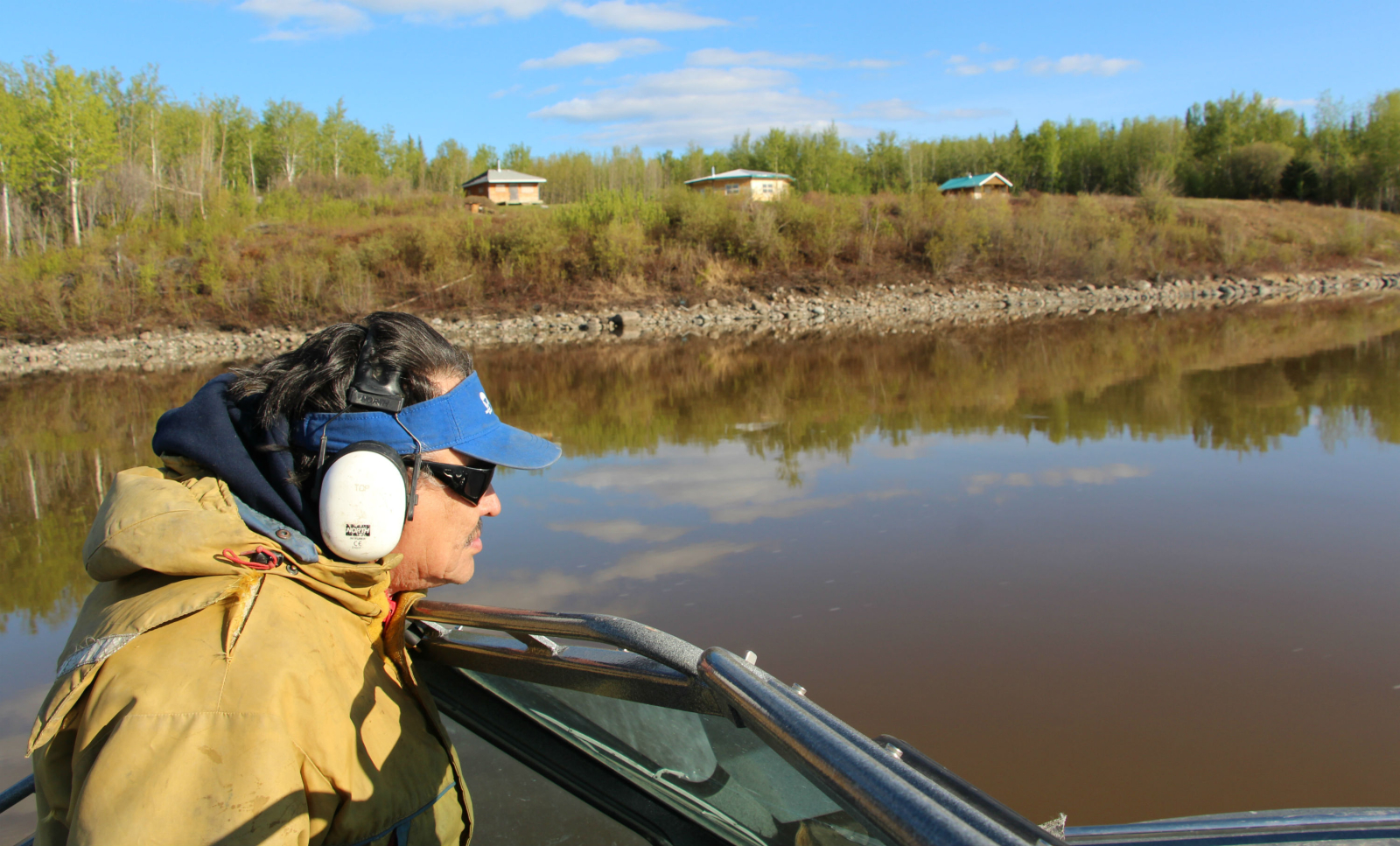 Herb Norwegian, Grand Chief of the Dehcho First Nations, takes his boat through the beautiful Mackenzie River in the Northwest Territories. Photo by Meagan Wohlberg.
Previous story
Next story

It began with a pencil and a map.

Herb Norwegian still remembers conducting the interview that laid the foundation for a groundbreaking land-use plan for 200,000 square kilometres of pristine territory in the Northwest Territories’ southern Mackenzie Valley.

“My first was with Edward Jumbo, an elder who at the time was 70 years old,” he tells me from his humble office in Fort Simpson. "We had just taken a magnificent boat trip together up the sparkling Mackenzie River, whose deep brownish black waters turn a reddish hue upon meeting the Rabbitskin River tributary.

“I gave him a pencil," Norwegian continues, "and showed him a map and said, ‘Tell me about the first time you ever shot a moose and where.’ He put a little dot on a little creek and said, ‘That was an important place in my life.’”

This summer marks the 10th year since the document, heralded as one of the best First Nations land use plans in the country, was drafted. Now in the midst of a nation-wide conversation around Aboriginal title, reconciliation and the right to free, prior and informed consent, the plan could have its best shot at being implemented in over a decade. This would set a powerful precedent for Indigenous-led land management and conservation in Canada and resolve regulatory uncertainty that surrounds a huge tract of developer-eyed land in the Northwest Territories.

The moose turned sideways and he shot, says Chief Norwegian

As Norwegian tells it, Jumbo had been 12 years old when he was hunting with his grandfather one spring. His grandfather had walked off to look for beaver, and Jumbo had sat down to build a campfire to make tea. He was listening to the trilling of the returned birds, the crackling of the candle ice as it melted, and the quacking of ducks playing in the creek when a moose walked out in front of him.

“They both looked at each other. The moose turned sideways and he shot," Norwegian continues, telling the story as if it were yesterday. "It was the first time Jumbo had ever shot a moose, and to this day that little dot is still on that map."

Norwegian is Grand Chief of the Dehcho First Nations, a network of 11 Indigenous communities in the southwestern quarter of the Northwest Territories. The traditional territory of the Dehcho spans 215,000 square kilometres — roughly the size of Guyana. In the early 2000s, he and his team on the Land Use Planning Committee began a seven-year process of interviewing more than 500 elders and traditional harvesters in the region to collect stories like Jumbo’s.

“He remembered everything in minute detail,” Norwegian continues.

Even decades later, Jumbo could outline all of the places he had shot caribou and moose; where he had trapped beaver, or set rabbit snares. He remembered where he had walked past grave sites or heard of their locations from his own long-passed elders; big creeks that had been given special Dene names. Sites of historic conflicts or wars. Where tents or cabins were set up. The best fishing spots, and the types of fish.

In essence, “Every piece of life he had ever lived on that land.”

More than 40,000 pieces of data were collected over those seven years, and it took half a year just to get them all onto a digital map. As Norwegian gazes at his own office wall, it’s as if he can see the bright projection of the Dehcho territory once again illuminating the bright white paint with the past and future of the Dene.

“It was just like a dreamcatcher,” he recalls of the first time seeing the final product. “All the lines, dots and circles — like the face of the moon. It was like the signature of the land, since time immemorial, of how it took care of the people. The vibrant flesh of Mother Earth. We were just mesmerized. Stunned.”

Traditional knowledge, like the stories and map data supplied by Jumbo, are the foundation on which the Dehcho’s ambitious land-use plan now stands. A draft version was finally completed in 2006.

At the end of the week, leaders from the 11 Dehcho communities will gather in Jean Marie River — the site where the tributary meets the great Mackenzie (Deh Cho, or “big river,” in Dene Zhatıé) — for their annual assembly, where they will mark the plan’s 10th anniversary and give an update to members on its status.

Under the driving vision of “One Land, One Plan,” the draft 96-page document maps out the region’s most sensitive and valued areas. It includes protected regions and conservation zones, infrastructure corridors for roads and pipelines, general use areas open for industrial development, and “special management zones” where both conservation and resource development can occur.

Like any other management plan, it also identifies requirements for anyone wishing to develop on Dehcho land, which is rife with valuable resources like nickel, lead and zinc, timber trees, and gas wells. Exxon Mobil, Shell, ConocoPhillips, Imperial Oil, and the Aboriginal Pipeline Group have already set their sights on the territory for the Mackenzie Valley natural gas pipeline, which would run 1,196 kilometres through the heart of it to connect northern onshore gas fields with North American markets if approved by governments.

But unlike others of its kind, the management plan is not just about land-use from a developer’s perspective. With traditional Dene laws and values woven into its core, it's more like a timeline of the Dehcho Dene reaching simultaneously backward and forward into “time immemorial” — a reference to infinity cherished by Dene chiefs and elders — toward the total preservation of language, culture and life on the land.

“It’s not just a regular land-use plan," the grand chief tells me. “We needed something integrated, solid and factual that came from the very land we’re talking about.”

Modern rules built around traditional Dene laws and values, such as showing respect, sharing what you have, and taking only what you need are explicitly outlined in the plan as they relate to practical measures, like revenue-sharing agreements and minimizing natural gas flaring. Education, language revitalization and youth programming are also included as key land uses.

Even the plan’s second recommendation reads, “Everyone operating in the Dehcho territory should respect the Dene Laws, Values and Principles and consider these in the way they conduct business.”

As Dehcho resource management co-ordinator Dahti Tsetso puts it, the reason the vast natural area has remained mostly intact for thousands of years is because of the stewardship shown by the Dehcho people through their interdependent relationship to the land.

Celebrated model for other First Nations

Since being drafted in 2006, the Dehcho land-use plan has garnered the respect and awe of Indigenous governments and conservation groups across Canada, many of whom rallied in major centres like Calgary and Ottawa in support of its release a decade ago.

It was around that time that Chris Beck, now the land-use planning co-ordinator for the Grand Council of the Crees (Eeyou Istchee), first heard about the Dehcho plan while working in northern Ontario. Now just one month into the formal land-use planning process for the Cree, who have a patchwork of agreements for their vast region in northern Quebec, Beck says the document still sticks with him as one of the most comprehensive in the country.

“It’s something I’ve used on many occasions as an example of a really interesting plan that balances conservation and development, and that is grounded in Aboriginal land use and Aboriginal interests,” he tells me over the over phone. “That’s what makes it inspiring.”

Praising it as a “conservation first” approach to land management, Beck also commends the plan for the space it leaves for resource development — a balance the Cree, too, are striving for.

“We want protection of the lands, and a strong economy as well,” he says.

Though the land-use planning being undertaken by the Cree Nation Government is technically a lot different from the Dehcho plan, Beck says there’s no doubt the document is a remarkable piece of work to reflect upon.

“For it to be grounded, you have to base it on the information of how people who use the land use the land,” he says firmly. “What makes their plan good and strong is the emphasis they put on that and the attention they gave to making sure that was addressed properly."

A struggle for territorial and federal governments

While the plan may be common sense for the Dehcho First Nations and other Indigenous groups that have eyed its potential, federal and territorial government officials have had a harder time coming to terms with what it represents from a regulatory standpoint.

For almost two decades, the Dehcho First Nations have been negotiating a land and resources agreement for their massive region, hoping to formalize their asserted sovereignty over the area and alleviate much of the economic uncertainty that has tied up development in the valley since the 1990s.

Fifteen years ago, the First Nations signed the interim agreements that would begin the land claim and self-government process with the Government of the Northwest Territories (GNWT) and Canada, in turn establishing a Land Use Planning Commission to create a comprehensive roadmap for the entire region with representatives of all three governments.

The Dehcho fully ratified the land-use plan in 2007, but it was rejected by the federal government, which said it protected too much land from development and added uncertainty to the existing regulatory regime.

Though the Dehcho position on the land management framework hasn’t faltered since, the First Nations have seen multiple territorial and federal governments come and go over the 15 years since the planning began, bringing massive political shifts along with them. Among those was the transfer of authority over lands, water and resources from Ottawa to Yellowknife in 2014, and the Conservatives’ hard-line move to render their own comprehensive claims policy as First Nations’ only negotiation option.

But with new federal and territorial governments both vocally intent on improving relations with Indigenous governments and fast-tracking land claim negotiations in the Northwest Territories, it is anticipated that the Dehcho land-use plan could be finalized within the year.

GNWT spokespeople confirmed the draft plan is expected to be submitted to the Dehcho main table negotiations later this summer, followed by technical reviews. Once drafted to the satisfaction of all three parties, neighbouring Indigenous governments will be consulted — as is legally required — on the potential impacts of the plan before it is given final approval.

Under the current political climate, Norwegian expects that the three parties will be able to come to an agreement this time around on the plan that he says is “95 per cent” approved.

Still, even if the document is once again rejected, the Grand Chief says the traditional knowledge at its core will remain intact both as the underlying guiding document for the Dehcho Dene for generations to come, and the nation’s assertion of title and right to free, prior and informed consent to development on their lands.

“The elders were very clear: if we wanted something to be long-lasting, it needed to have that traditional knowledge at the foundation,” he says. “That was the pillar on which the whole land use plan would be built. The rest was just straightforward Western science.”

Quite an interesting story,

Quite an interesting story, unfortunately being replicated in my own country, Uganda. The indigenous-led land management and original seeds have been ridiculed as backward. Current foreign investors are focusing the natural rain forests, clearing them to plant sugarcane. The natural Savanah land forest reserves are replanted with the cold climate pine trees. Learned officials are closing ears to the prophetic cries that the Sahara Desert is expanding south over the equator line. Its a great pity!