'I think it matters': Kim Campbell being the first and only female PM in Canada 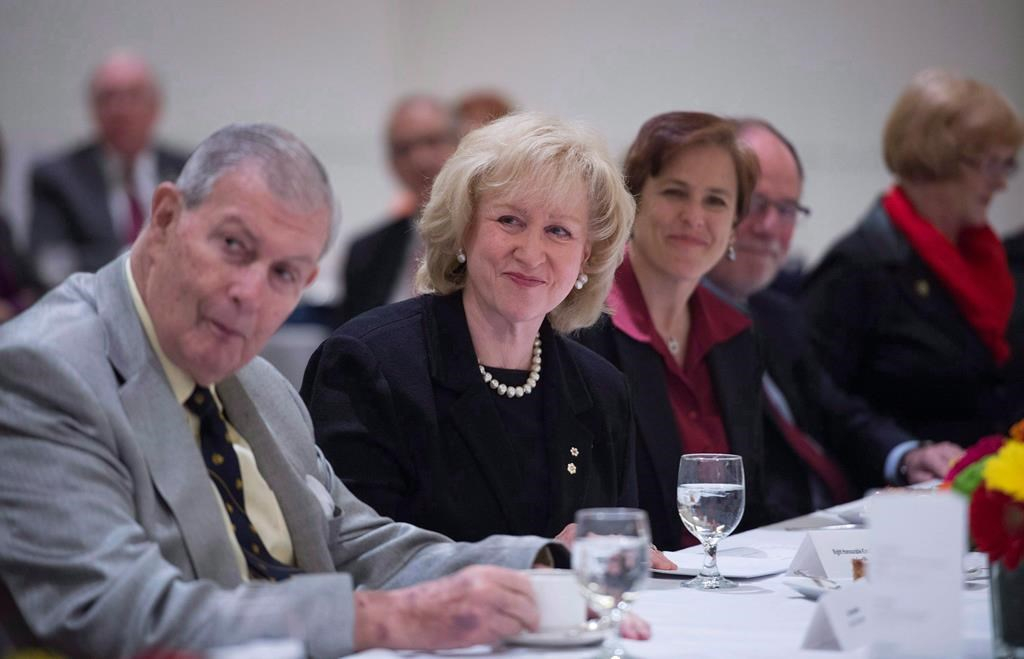 Former Canadian prime minister Kim Campbell listens to a speaker at a meeting of the Canadian Club in downtown Vancouver in an April 22, 2015, File photo by The Canadian Press..
Previous story
Next story

The speech U.S. President Barack Obama delivered in Ottawa this week was rife with references to tropes of Canadian history and culture, including hockey rinks, cross-border shopping trips and the fact that Canada long ago beat the Americans to having a female head of government.

"Here in Canada, a woman has already risen to the highest office in the land," Obama told the House of Commons.

That woman, of course, is Kim Campbell.

The former Progressive Conservative prime minister spoke to The Canadian Press earlier in the week about women in politics, including presumptive U.S. Democratic presidential nominee Hillary Clinton, and what it is like to be the only woman whose portrait is hanging in the gallery of Canadian prime ministers.

Every once in a while, Campbell said, someone on Twitter decides to tell her she was only prime minister for about five minutes.

"My husband's reaction to people who say that is: 'I suppose your wife was busy that weekend!' " Campbell said by telephone from Edmonton.

It was actually four months, from June 25 to Nov. 3, 1993, and if anyone is really counting, she points out her 131-day term was neither the shortest nor the second-shortest as far as Canadian prime ministers go.

She was also the first female leader of the Progressive Conservatives, winning the leadership race after former prime minister Brian Mulroney resigned, the first female defence minister in any NATO country, the first woman to serve as attorney general in Canada and, before any of those accomplishments, the first girl to be president of her high school student council in Vancouver.

As the founding principal of the Peter Lougheed Leadership College at the University of Alberta, Campbell now spends a lot of time thinking about all the things that can get in the way of women and other "non-prototypical leaders" taking on those roles.

"We all carry around implicit attitudes based on how we have understood the way the world works as we grow up and if you never see a certain kind of person in a certain job, and all of a sudden somebody who looks or sounds like that shows up, you go 'Oh, wait a minute. Who are you? You don't belong here,' " she said.

She said she believes this is a factor in some of the criticism of Clinton, who was First Lady to former U.S. president Bill Clinton when Campbell first met her at the G7 Summit in Tokyo in 1993.

"Things that people hate about her ... are kind of small potatoes, compared to other people who have run for public office," said Campbell, who then mentioned the email scandal and the attack on the U.S. embassy in Benghazi.

"You're looking for the way to be able to say 'Aha! You see? That's why I'm not going to vote for her.' But underlying it is really this sense of discomfort that 'I've never voted for somebody like that for president.' "

Campbell said that as someone from the same generation of feminists — they were both born in 1947 — she admires Clinton for always having advocated for "women's issues" at a time when other women were worried doing so would lead to them being marginalized as leaders.

"We were kind of sucked into this notion that if we wanted to be powerful, we had to be powerful in the boys' club, and she didn't buy into that," Campbell said of Clinton.

Campbell also said women have to reach a higher bar.

"The fact that somebody like Donald Trump could be taken seriously for a nanosecond," said Campbell, referring to the presumptive U.S. Republican presidential nominee.

Campbell said she had a hard time deciding whether she wanted to try and be the first prime minister in Canada, because she knew even then the odds of winning the 1993 election were slim to none.

"My concern was, knowing that was the case, would my being leader undermine credibility for women? And that was a hard decision," she said.

Given Canada has not had a woman prime minister since, Campbell was asked to answer her own question.

She said she often gets messages from elementary schoolchildren who have picked her for their project on prime ministers.

"I think for young people to think that this is something that a woman could do and should aspire to, I think it matters," she said.

"Imagine if there still was not a woman there. It's 150 years and I'm the only woman who was ever there."