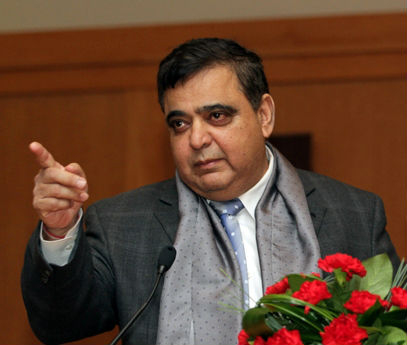 Rightfully so — he’s the Tories’ longest-serving member of Parliament, having been elected in 1997 as a Reformer and re-elected for six straight terms to the riding recently redrawn as Calgary Forest Lawn. He’s a visible minority, an immigrant, and reportedly speaks at least five languages.

“When I first won and I landed in Ottawa on a late June night,” he recalls, “I said, ‘How did a young immigrant from Africa who grew up on the streets of Tanzania from a poor house, land in this place here, the majestic building of Parliament?’”

His success story is remarkable indeed, especially in a party recently described by one Conservative strategist as being known for its membership of predominantly "stodgy, uptight old white men."

But that reputation won't last if Obhrai is elected leader of the Conservative Party next spring on his platform of inclusion and diversity for the Tories. He tossed his hat into the ring earlier this month, joining hopeful Ontario MPs Tony Clement, Michael Chong and Kellie Leitch, and Quebec MP Maxime Bernier.

A new era of inclusiveness for Conservatives

“My biggest and most important goal on the national stage is to stand up to my principles and talk about inclusiveness,” he tells National Observer. "My message is trying to appeal to the wider base of the Conservative Party — that this is a diverse, inclusive party that has a place for everyone.”

Obhrai knows he has his work cut out for him.

He recognizes that his party made mistakes in the last election, from the controversial niqab debate to proposing a 'barbaric cultural practices' call line that many viewed as targeting Muslims specifically. But he's confident his diverse background will help him do the job.

"During all my time that I have been in the reform caucus, I have learned one thing: people tend to make judgment based on ignorance, not based on facts," he explains. "My diversity and my experience allows me to talk on that stage, which is why in the 10 years I was parliamentary secretary for foreign affairs, my government respected my opinions and I was respected around the world as well.”

Obhrai shares bits and pieces of his resume over the phone — an impressive list of credentials that includes appointments as the parliamentary secretary not only for foreign affairs, but for international cooperation and international human rights as well. He has further served as a member of the Queen's Privy Council, and before his days as a politician, as the president of the India-Canada Association, the Monterey Community Association, and the Hindu Society of Calgary.

"I’ve always said one of the greatest, greatest learning tools for democracy which is in Canada and not anywhere else, is our community associations," he said. “And if you go through that route, that is one of the best training routes that you can have that leads you to where I am today after 20 years, [vying] to be leader of the Conservative caucus.”

While Obhrai speaks with the paced confidence of a seasoned politician, he is exceedingly careful that this confidence not be perceived as arrogance. It’s important never to take power for granted, he explains, as someone who has seen three prime ministers come and go before Trudeau was elected in 2015.

“The day you enter what you call ‘a culture of entitlement’ is the day you find yourself packing your bags,” he says. "The day I won the election — it's the most humbling experiences you can ever have. It’s so humbling that people put so much support and confidence in you.”

After a decade of power, he says people got tired of the Harper government, and well aware that he has held his own seat in Calgary even longer, he hopes that his humility and honesty will prevent people from getting tired of him too. At 66 years old, Obhrai could still have a long career ahead of him.

When asked how he would use his power as head of the federal Tories in the years to come, he cites not only the promotion of inclusion, diversity, fiscal responsibility and respect for the taxpayer dollar, but an end to the push for a national carbon pricing scheme.

While he doesn't deny that climate change must be addressed with haste, Obhrai believes there are other ways to do it than imposing a nation-wide carbon tax. He says carbon pricing should be determined at the provincial level based on the unique economic situation of provinces and territories, and the only other policy he proposes to deal with the climate crisis would be some type of investment in clean technology.

Apart from that, he would let the provinces and territories pursue their own plans:

“You cannot have a blanket across the country, as Trudeau wants to do, because many regions of the country are suffering," he explains. "To pile a tax on that is absolutely a regressive policy... Nevertheless, on a larger scale of things, we need to provide more investments into clean technology and energy to reduce the carbon footprint.”

But that doesn't include a ban on oilsands expansion, says the Calgary MP, who cites pipelines as being "crucial" to Canada's natural resource economy and necessary in getting the country's oil to tidewater.

Conservative Party members are expected to vote on a new leader in May 2017.

By Elizabeth McSheffrey | News, Politics | June 1st 2016
Reports from the Race to a Safer World