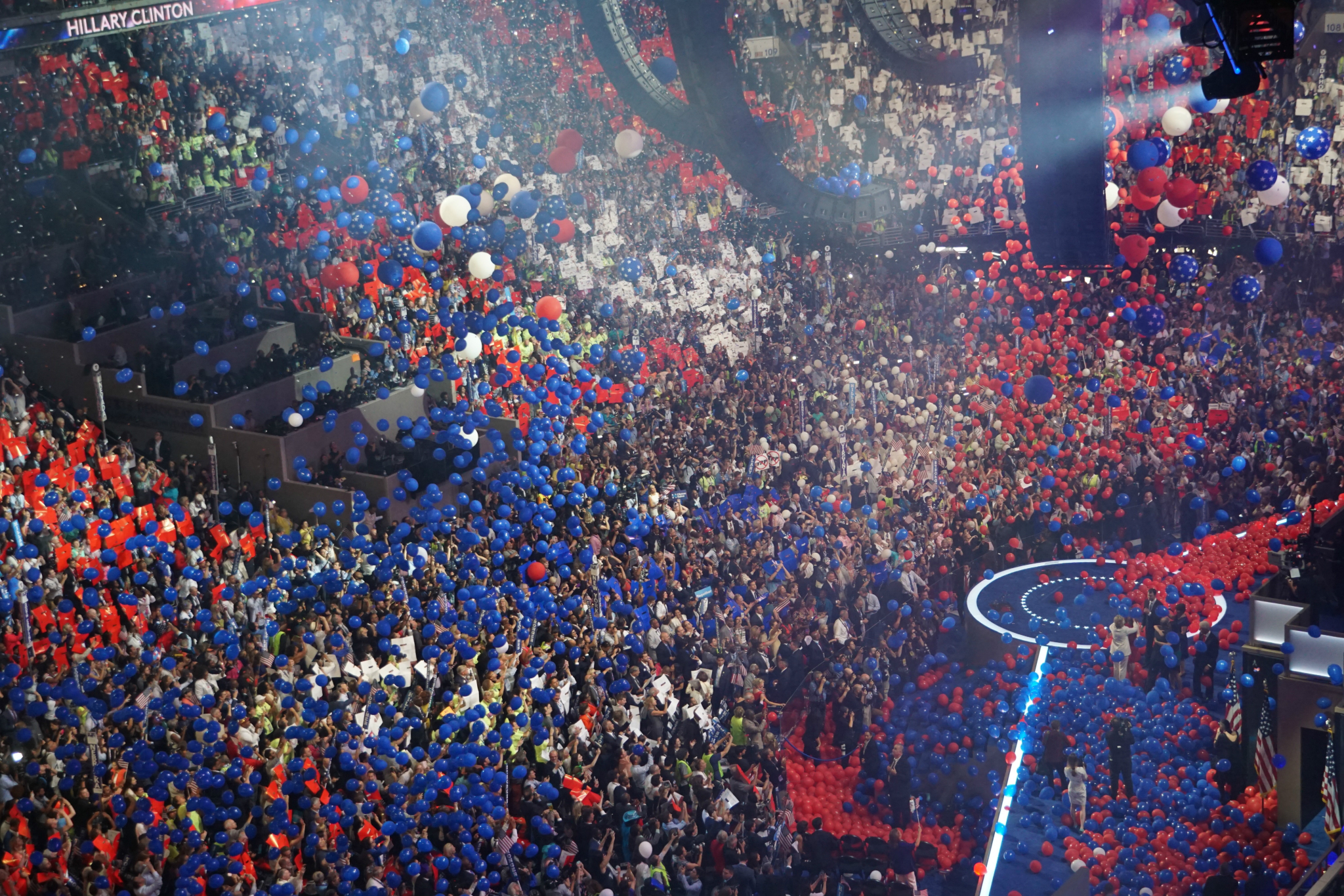 I'd been inside all day and night listening to Democratic propaganda filled with love and hope while he was covering — in great detail — the loud and impassioned protests outside the convention hall.

"Hi," my friend, Robin, would say, "you pampered gentrified one percenter.”

What had become of us after only 5 days in America? We'd been friends since we were three.

But while the Democratic Party was slowly becoming unified, we two Canadians were becoming divided by our radically different experiences of the event. Outside, protest and anger. Inside, it was all love and hope and a progressive future.

Anyway, let's get into it.

On the final day of the convention, roughly 160-220 delegates wearing neon yellow shirts stood out from the crowd. They were rumoured to be planning a walkout during Hillary’s speech as a final protest of the unfair treatment Bernie Sanders and his supporters received from the biased DNC. I’m sure you all heard about the leaked emails.

As the delegates geared up for Hillary Clinton's historic speech, I was starting to get weird vibes.

I couldn’t help but notice how much the neon yellow shirts stood out in the room.

It reminded me of how the combination of a grotesque mainstream media bias against Sanders, undemocratic superdelegates, and far-from-neutral DNC had all led to Clinton's nomination.

It was all getting too intense. It was so much easier for the room to focus on Katy Perry's performance and push all those problems out of mind.

The feeling of unease got worse as Hillary Clinton finally took the stage, and a man in one of the entrances, hidden from any cameras, booed his heart out when the crowd fell silent.

He was presumably escorted out by secret service officers, as the booes came to an abrupt halt.

Even still, the air was thick with tension.

Since the convention began, I've had a hard time nailing down my views. They've been ever changing, as I've opened up to new information and ideas.

I agree with everything Bernie Sanders said before the convention. Income inequality is a huge problem, big money has too much influence in politics, young people are facing challenges that didn't exist in their parents' generation, and climate change needs to be approached like the U.S. would approach a war.

But at the same time, I also agree with everything Sanders has said at the convention, about voting for Clinton, considering the circumstances.

He endorsed her, and personally nominated her.

Yes, at points he may have looked like he was restraining bitter frustration or sadness, but he did it anyway.

No one likes losing, especially after a campaign like he had. He’s human, and no doubt he dreamed about standing in her place, drowning in balloons on the convention stage.

Sanders probably hasn’t slept the past four nights, mulling over the decision he made.

But he knows what’s at stake.

As Obama said in his speech on Wednesday, “If you’re serious about our democracy, you can’t afford to stay home just because you don’t align with her (Clinton) on every issue.”

Sanders has a national voice now. I think he can continue the political revolution under a Hillary presidency. His influence was already obvious in her speech.

As Hillary Clinton kept going in her speech, though, the mood in the room changed.

Throughout the convention, Bernie Sanders’ movement was given respect and acknowledgment and praise, in spite — or maybe because —of disagreements going into this event.

Hillary Clinton did a good job of topping it off during her acceptance speech, thanking Sanders and his supporters.

“To all of your supporters, here and around the country. I want you to know, your cause is our cause," she told Sanders. “Our country needs your ideas, energy, and passion. That is the only way we can change our progressive platform into real change for America.”

As a Canada-U.S. dual citizen, I’ve spent the entire primary season not trusting any of Clinton's rhetoric, being more drawn to Sanders' campaign. But in that moment, I found myself optimistic.

The stadium was packed beyond capacity, so even if the delegates had wanted to stage a walkout, they wouldn’t have gotten anywhere because of the crowd. But it didn’t look to me like they even tried.

“In my first 100 days we will work to make the biggest investment in new good paying jobs since World War II. Jobs in manufacturing, clean energy, technology and innovation, small business and infrastructure,” Clinton said. “We will transform the way we prepare our young people to be prepared for those jobs. Bernie Sanders and I will work together to make college tuition free for the middle class, and debt free for all.”

Hillary Clinton's speech was powerful, and it left me optimistic. It ended giving me the sense that the more progressive Democrat core of voters are being acknowledged, and that they might actually be included in the party's efforts to change the U.S. for the better.

Can the Democrats unite vs Trump? DNC live blog day 1