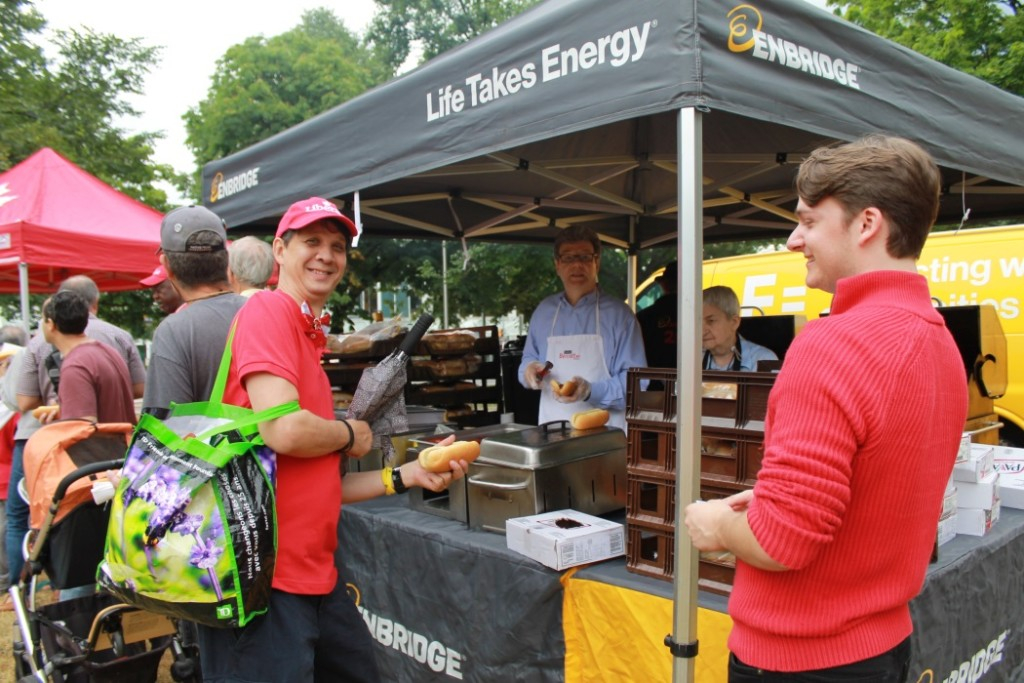 The office of a senior minister in the Trudeau government will reimburse Enbridge for some hot dogs after an opposition critic accused the Calgary-based pipeline operator of using a barbecue to curry favour on an upcoming federal decision - an allegation that the company rejected as "absurd."

The controversy was cooked up over a Canada Day barbecue hosted by federal Indigenous and Northern Affairs Minister Carolyn Bennett in her Toronto area riding. The event has been an annual tradition for more than 15 years in Bennett's Toronto-St. Paul's riding, her office said.

This year it was mainly sponsored by taxpayers with about $4,500 in funding coming from Bennett's parliamentary budget - which can be used by federal politicians to cover events of this nature.

Despite the funding from her parliamentary budget, Bennett said on her Facebook page, after the event, that Enbridge had supplied the grill, hot dogs and volunteers.

The NDP's indigenous affairs critic, Charlie Angus, said he believes this was a mistake as Bennett and other ministers in Prime Minister Justin Trudeau's cabinet are now supposed to be contemplating the fate of Enbridge's controversial Northern Gateway pipeline project.

"Enbridge isn't showing up on their day off to work in a soup kitchen," Angus told National Observer in an interview. "They’re showing up to support the political brand of the minister of indigenous affairs and that’s not the kind of behaviour the minister should be engaged in if she’s trying to reassure Indigenous communities that she will be their advocate and that she will make sure that their interests will be heard."

It is common for corporations to sponsor public or community events through donations, and media outlets such as National Observer can also receive funding from sponsors in the form of advertising.

But Angus said Bennett has responsibilities as a minister to avoid appearances of conflict of interest, especially at a time when the federal government is reviewing Enbridge's proposals.

After being told of Angus's criticism by National Observer, Bennett's constituency office said it would reimburse Enbridge for any costs incurred from its support for the barbecue. Bennett's office noted that the event was a popular annual gathering in her riding, drawing 450 constituents this year who came out to engage with local politicians, community leaders and organizations such as the Aboriginal Peacekeeping Unit of the Toronto Police Services, as well as an emergency shelter provider, Na-Me-Res, which showcased their programs and services in the region.

"The Enbridge Community Outreach team has also participated at this event by providing a BBQ and volunteer," said Bennett's office in a statement sent to National Observer. "With the appointment to Minister of Indigenous and Northern Affairs, our office is reimbursing costs associated with the BBQ and volunteer for the Canada Day Picnic to ensure there is no conflict of interest."

The proposed Enbridge Northern Gateway pipeline was initially approved by the former Harper government in June 2014 with 209 environmental, financial, and technical conditions.

That approval was later reversed in June by the Federal Court of Appeal in response to a legal challenge launched by eight British Columbia First Nations groups. The court concluded Harper's administration had failed to engage in meaningful consultation with First Nations.

If built, Northern Gateway would ship an average of 525,000 barrels of oil per day from Alberta's oilsands producers to the B.C. coast and about 193,000 barrels of toxic condensate, used to dilute and ship the oil, in a separate pipeline going in the opposite direction.

Enbridge has 31 First Nations and Métis partners on board to build the pipeline project, but many Indigenous communities have also aggressively opposed the project, warning that the risks are too high that the project will lead to spills along its route in British Columbia's Great Bear Rainforest or from tankers off the Pacific coast.

The Trudeau government has not yet announced how it plans to respond to the court ruling, but the federal Liberals have traditionally been opposed to the project: The government has announced plans to formally introduce a ban on large oil tankers off the northern coast of B.C., which would make Northern Gateway unlikely to proceed. Trudeau has also said that the Great Bear Rainforest is no place for a pipeline.

The Line 3 project would nearly double the existing capacity of a pipeline that runs from Alberta to the U.S. midwest to about 760,000 barrels of oil per day. ​

Enbridge, known for operating a large network of pipelines as well as being a leading Canadian supplier of renewable energy, dismissed Angus's concerns, noting that it has supported politicians of all stripes at community events in recent years, including Conservatives, Liberals and New Democrats.

"That is an absurd accusation," said Enbridge spokesman Graham White. "Our support at community events is provided on a first-come first-serve basis as requested in the more than 100 communities we serve across Ontario."

When asked about Enbridge's involvement with the barbecue, Grand Chief Stewart Phillip of the Union of BC Indian Chiefs and a leading opponent of Northern Gateway, said he didn't see any "glaring evidence of conflict" but found the optics to be unsettling for anyone who has committed time opposing the pipeline.

"We haven't had any clear signal from [the government] in terms of how this is going to continue to unfold [after the court ruling]," he said in a phone interview with National Observer. "Clearly the opposition to Enbridge Northern Gateway is just as deeply entrenched as it was a year ago or two years ago. And nothing is going to change that, particularly given the recent [Husky] spill in Saskatchewan in the Prince Albert area.

“So I would hope that the Trudeau government has the good sense to realize that it’s a dead horse.”