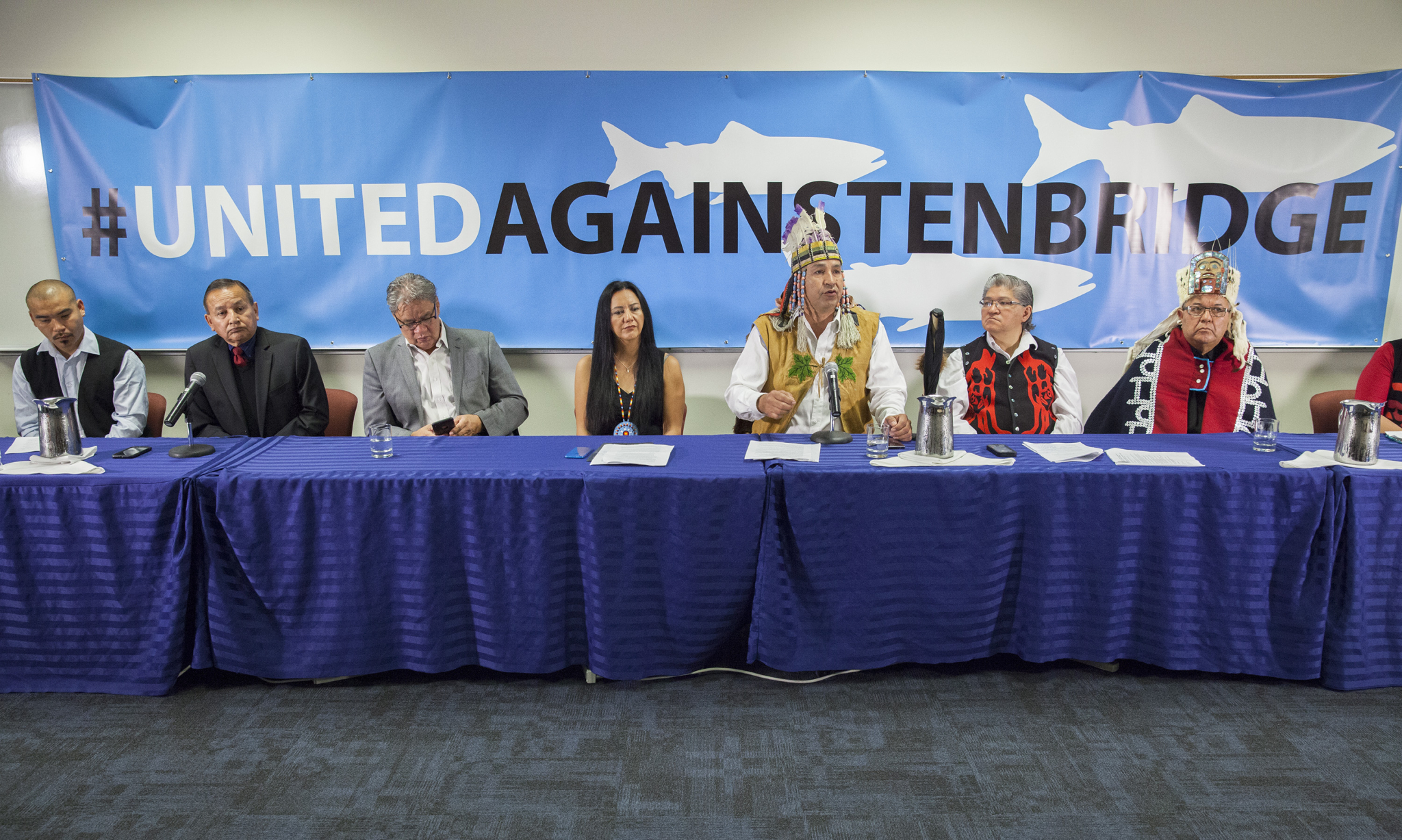 The Harper government’s already strained relationship with First Nations that oppose oil sands pipelines is being put on trial this week.

Eight B.C. First Nations are in federal court to launch a legal attack on the Enbridge Northern Gateway pipeline. The coalition hopes to overturn Ottawa’s conditional approval of the project, which would deliver Alberta crude to B.C.’s north coast.

The Union of B.C. Indian Chiefs Grand Chief Stewart Phillip pledged to go to jail if necessary to stop the pipeline, and said the federal Conservative government has “completely demonized and vilified Indigenous peoples of this country and has declared all of these [energy] projects in the national interest.”

“[It] has pitted the economy against the environment in a reckless and irresponsible fashion," he said at a Vancouver press briefing today.

If a Harper government is re-elected, Grand Chief Phillip said to expect huge Indigenous clashes to continue and worsen over Northern Gateway— as well as over Trans Mountain expansion and Energy East pipelines.

“We are very quickly headed for another Oka type of conflict across this country,” he said, in reference to a 1990 showdown in Quebec, between Mohawk warriors and Canadian soldiers that caught the world’s attention.

Heiltsuk elected chief councilor Marilyn Slett knows about showdowns. She locked herself in a federal fisheries office earlier this year to force the federal government to negotiate regarding the commercial overfishing of herring off the central B.C. coast.

Fighting back tears, she said Thursday to expect more of that kind of drama should Northern Gateway go ahead.

“Whatever decision the court makes, the Heiltsuk are committed to protecting our land and our resources in whatever means necessary,” said Chief Slett.

So how did we get here? A Northern Gateway timeline

How have the actions of Conservatives and Enbridge led to such a sour state of affairs?

The saga began in May 2010, when Enbridge applied to the National Energy Board. The project was pitched as a "gateway" for getting Alberta oil to China. Its backers eventually included Chinese state-owned oil companies and giant Alberta oil sands producers such as Suncor.

But by December, the project had already lost favour with Alberta and B.C. First Nations, who signed the Save the Fraser Declaration. It stated the pipeline represented "grave" and unacceptable risks to ancestral lands and salmon watersheds. Many worried about pipelines bursting, and about how to clean up a catastrophic oil spill in B.C.'s remote far north, where rivers could swiftly carry away spilled toxic bitumen.

In late 2011, Stephen Harper got a disappointing phone call from Obama. The U.S. would delay approval of a different giant pipeline —TransCanada's Keystone XL. Harper was reportedly furious, and convened a strategy session with cabinet where Enbridge’s Northern Gateway was seen as the “most imminent option” to get landlocked Alberta oil to market, Bloomberg reported.

Indigenous tensions intensified in January 2012 when the federal joint review panel hearings for the project began. But the process saw First Nations speak almost unanimously against it into government microphones —often briefly and with little effect, complained chiefs on Thursday.

“I spoke to my people for years about this project. And I was given 10 minutes [at the hearing]. And then arbitrarily cut off. So that was the extent of my input," said hereditary Chief Tsodih (Pete Erickson) of Nak’azdli First Nation.

“We constantly run up against a Canadian government who doesn’t listen to us —who is not interested in true consultation,” added councilor Cheryl Bear with Nadleh Whut’en First Nation. "We say the government acted unlawfully and unconstitutionally."

"They did come, but when the hereditary chiefs were ready to speak, they left. And that left a real sour taste in our mouths," said Gitxaala hereditary Chief Matt Hill. "There’s no way we can respect people that handle their business that way."

2012 was also the year the Harper government launched a wave of pro-pipeline laws and policies. The moves sped National Energy Board (NEB) pipeline hearings, stripped away protections for waterways and endangered species, enabled tax authorities to audit charities that oppose the oil sands, and pushed to identify pipeline opponents as extreme "radicals" and national security threats.

Even disgraced Senator Mike Duffy was apparently helping to push Enbridge in 2012 by exchanging notes with Prime Minister Harper about the company's pipelines. He was also speaking often with two senior Enbridge executives, a National Observer investigation of Duffy's redacted diary found. The Senator's communications between the $57-billion pipeline giant and Stephen Harper's government were never disclosed in the lobbying registry.

Duffy introduced Krause to his speaking agent —who booked her at high-paid oil and mining convention speaking gigs. The senator also cross-examined her at a parliamentary committee hearing to popularize her views.

In 2013, a Vancouver Observer investigation uncovered FOI documents showing the National Energy Board was coordinating the Canadian Security and Intelligence Services (CSIS) and the RCMP to keep tabs on First Nations groups and movements, such as Idle No More. [Vancouver Observer is a regional affiliate of National Observer.]

By the close of that year, the Joint Review Panel recommended the pipeline be approved. The Harper government then had six months to make a decision.

By March 2014, a surreal political campaign over a plebiscite began in Kitimat — the terminus community for the pipeline on B.C.'s northwest coast. Enbridge officials canvassed door to door, urging citizens to vote "yes" to the pipeline. Their opposition? Ordinary citizens with little money and hand-painted lawn signs. Finally in April, when the vote result was revealed to a Kitimat crowd. Residents and Haisla neighbours reacted ecstatically in a moment captured on video.

"I think Enbridge and the government really don't understand what happened here tonight," said former Haisla chief Gerald Amos to the crowd in a megaphone. "What we witnessed was a community-building exercise that should scare the shit out of them."

By May, anti-Enbridge rallies in Vancouver heated up —and one was met by Sun TV's Ezra Levant. The broadcaster and author of Ethical Oil walked right into the hornet's nest of oil protesters with his cameraman to provoke passions for his now-defunct TV program. Sun TV was masterminded by the Prime Minister's current Conservative campaign manager, Kory Teneycke.

Levant's rants on Sun that year included tirades against rock star Neil Young whom Levant accused of spreading "lies" about the oil sands during his concert series in support of the Athabasca Chipewyan. The northern Alberta band is fighting to get government to "honour the treaties" that were supposed to protect their health and land from heavy oil sands development.

And in June, 300 scientists wrote a “Dear Prime Minister” letter stating that the federal review of Northern Gateway was deeply “flawed," "biased" and excluded important science on oil impacts.

On June 17, 2014, the national media awaited a highly anticipated moment —a Harper cabinet member taking the podium to announce the government's decision on the pipeline. The moment never came. A simple government press release was issued on one of the country's biggest industrial decisions in generations. Northern Gateway was a go with 209 NEB conditions. Passions erupted in Vancouver where thousands protested and First Nations drummers took to the streets.

Many promised to "punish" Conservatives in B.C. in the next federal election. Grand Chief Phllip told a large downtown crowd, "The war is on."

Enbridge attempted to meet the NEB's 209 conditions, and those of B.C.'s government— which include a rapprochement with First Nations over the pipeline. But if the company's silence has been any indication, negotiations have not gone very well.

"Despite this litigation, we remain committed to working collaboratively with the applicant First Nations and would be very pleased to develop mutually beneficial solutions with them."

"Our ongoing priority is to continue to build trust, engage in respectful dialogue, and build meaningful partnerships with First Nations and Metis communities. We know we have more work to do in this regard and we are committed to doing this work."

"Northern Gateway accepts and recognizes the traditional land use rights and practices of First Nations and Metis peoples."

"The project proponents believe First Nations and Metis communities should share in the ownership and benefits of Northern Gateway. Their input will make the project better and we are open to change."

"The project proponents remain committed to Northern Gateway and building this critical Canadian infrastructure. We are continuing to work towards meeting the conditions set by the Joint Review Panel and the BC government."

"As we’ve said many times, we remain confident in the rigor and thoroughness of the Joint Review Panel process. Its careful examination of the Northern Gateway project was one of the most exhaustive of its kind in our country's history. Northern Gateway’s submission to the JRP was the most comprehensive application ever submitted: 30,000 pages, 180 days of hearings, and 80 expert witnesses including some of the foremost scientists and engineers in their respective fields from around the world."

A message for Mr. Harper: 'You're not going to bully us.'