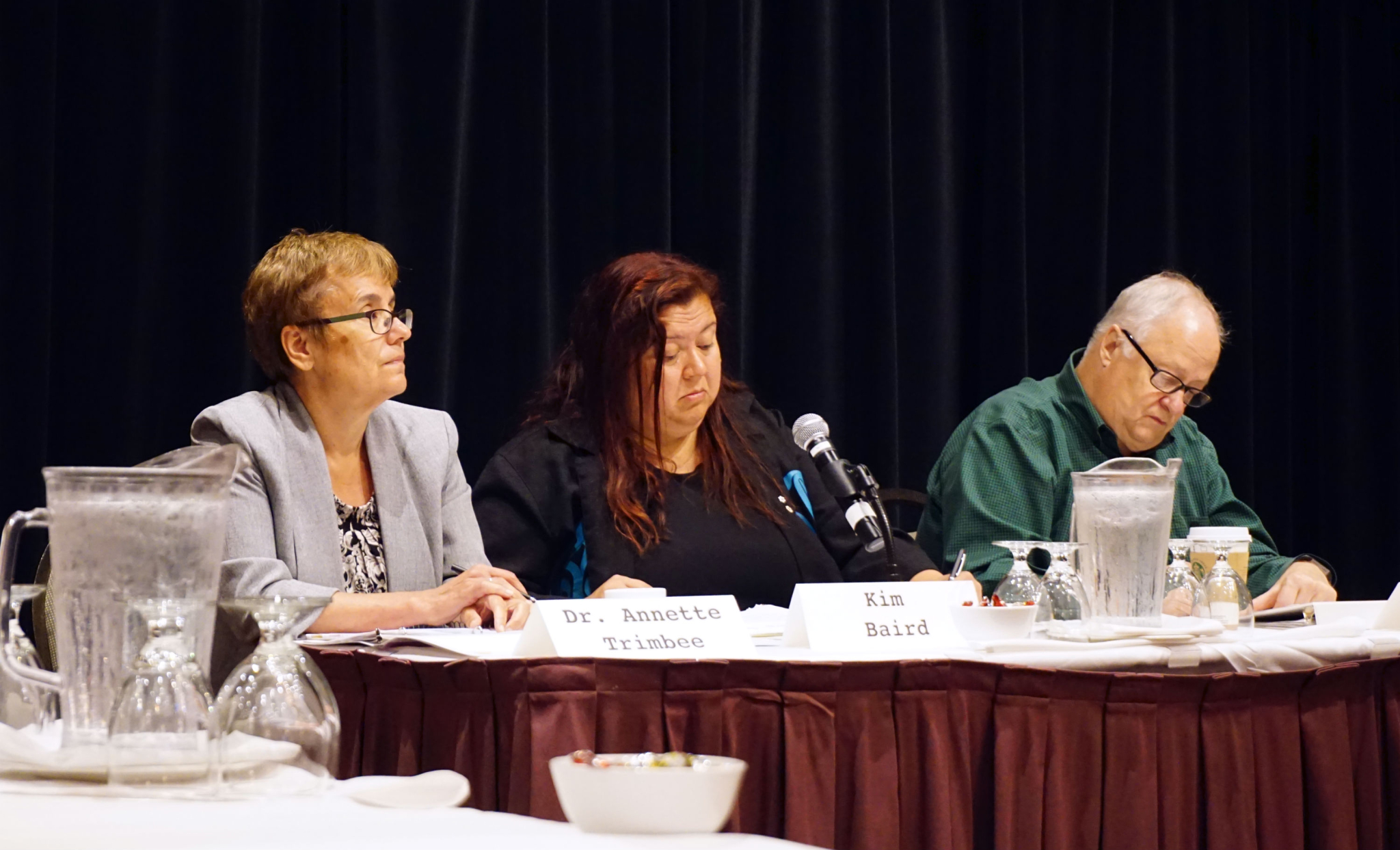 The last time the public weighed in on Kinder Morgan's Trans Mountain expansion project, they faced stare downs from regional police and a barricade of security guards. They were not permitted to ask questions of National Energy Board (NEB) panelists, who sat at the head of a room behind a physical barrier to keep them at arm's length from the public.

At a meeting in Burnaby on Tuesday, a new set of panelists appointed by the feds to strengthen community consultation made it very clear that they are not the NEB.

"Our role is to listen to you," panelist Kim Baird told a room full of concerned residents as she opened the proceedings for Vancouver's Lower Mainland. “Our role as a panel is not decision-making nor is it to make recommendations."

Baird and her fellow panelists took questions from the public and accommodated last-minute speaker sign-ups. It was conduct that never would have been permitted during the NEB hearings — meetings that were closed to anyone without 'intervener status' and subject to strict pre-determined protocols.

Yet, despite their efforts to be inclusive, participants in the meeting still questioned the panel's ability to relay their concerns accurately to the federal government, which will decide whether or not to approve the Trans Mountain expansion in December this year.

The Trans Mountain pipeline expansion is a proposal by Texas oil-giant Kinder Morgan to add roughly 980 kilometres of brand new pipeline to an existing system, tripling its carrying capacity from 300,000 barrels per day of crude oil and refined petroleum to 890,000 barrels per day. The current pipeline runs from the oilsands in Alberta to refineries and marketing terminals in Vancouver and Washington.

It was recommended for approval by the National Energy Board earlier this year, despite widespread concerns with Kinder Morgan's pipeline science, conflict of interest charges against the NEB itself, and accusations that the review process itself was "a sham."

The Trudeau government promised to overhaul the NEB, and add additional "meaningful consultation" with stakeholders, residents, and Indigenous communities through the ministerial panel. The panel includes Baird, a former chief of the Tsawwassen First Nation and energy industry consultant, Annette Trimbee, president of the University of Winnipeg and former Alberta deputy finance minister, as well as Tony Penikett, a former premier of the Yukon.

"This is a really sophisticated and difficult topic that has all sorts of nuances and heavy policy, legislation attributes," said Marvin Rosenau, an instructor at the British Columbia Institute of Technology's Fish Wildlife and Recreation Program, and technical advisor to the local Salmon River Enhancement Society who presented to the panel on Tuesday morning.

"Do they have the capacity to really grasp all the information, and distill it into a thesis or product that they can bring to the governments? I don’t get a sense that they have that horsepower."

Rosenau's presentation focused on concerns that Kinder Morgan did not commit to best practices in its proposal to "flop the pipeline" on top of fragile streams and riparian zones, and cover them in trees and shrubs, rather than build underneath streams to protect local fish populations. As the panelists scribbled periodic hand-written notes, he questioned the entire consultation itself.

"The NEB process was frustrating as hell — an enormous amount of work, bureaucratic to the nth degree and didn’t really seem to want to listen to what the scientific facts were,” he told National Observer. This process seems a little bit phony, but I get that you always have to be optimistic, that maybe this is the tipping point that will bring more common sense into the whole process.”

He was joined in his concerns by Kai Nagata of the Dogwood Initiative, who questioned how public the meetings truly were. While all were welcome to attend them without prior registration, they were not well publicized and, as a result, many hearings took place in front of mostly empty rooms. The panel waffled on his questions about why the meetings would not have recordings made public or transcripts made available on the ministerial website or couldn't simply be live-streamed.

Baird told him the panel would periodically upload summaries of their consultations with the public — an answer he deemed unsatisfactory.

"Everyone is on vacation or at work right now," he told National Observer. "It’s a great way to ensure that as few members of the public participate in possible. The [pipeline] decision will come out of [cabinet] in December based on a whole mishmash of reports and the government basically sticking a finger in the wind in B.C. to figure out how many seats they're going to lose."

Dogwood Initiative has already run a campaign demanding Baird's resignation for her close ties to the project proponent. In 2010 she participated in an business skills exchange program with a Kinder Morgan Canada executive, which compromises her impartiality, the organization argued.

Baird however — backed by the Natural Resources Minister Jim Carr — has denied this conflict of interest claim and maintained her participation in the program will not impact her ability to relay public concern on the Trans Mountain pipeline to the federal government.

She also said the report the panel makes to federal ministers will be made available by Natural Resources Canada in the interests of transparency.

"We’re confident we can canvas the range of issues people are concerned about using the processes we’re using," she told National Observer. "It’s important to reiterate, we aren’t replicating the environmental assessment process."

The ministerial panel has already conducted consultations in Kamloops, Chilliwack, Abbotsford, and Langley, B.C. So far, more than 80 per cent of participants have opposed the Trans Mountain expansion, according to numbers tallied by Stand.

Consultations will continue in the Lower Mainland throughout August.