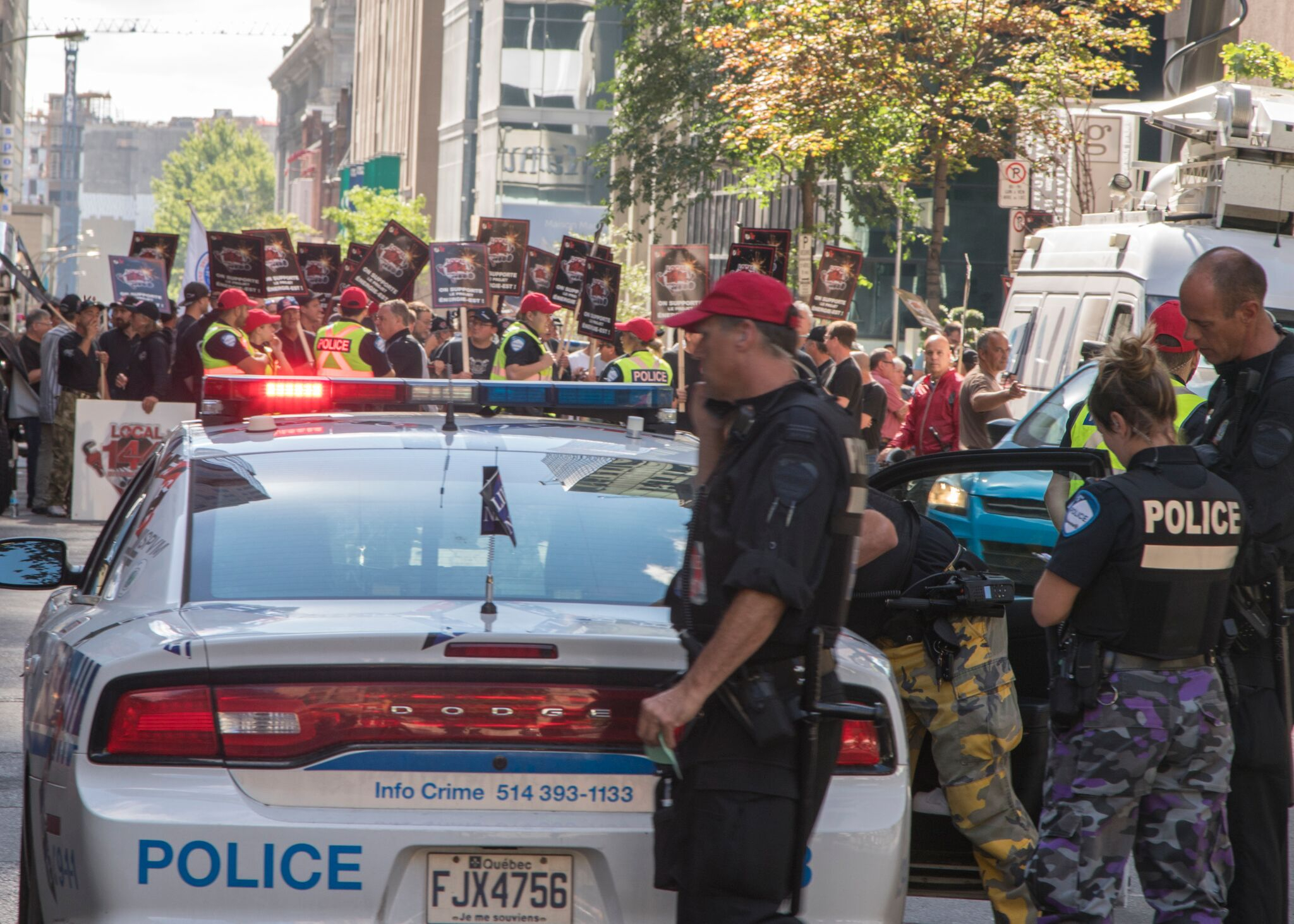 Montreal police hold off a large crowd of protesters as the NEB's Energy East pipeline hearings were set to reconvene before their cancellation on Aug 29, 2016. Photo by AJ Korkidakis .
Previous story
Next story

One of the panelists reviewing the Energy East project for Canada's pipeline regulator was previously penalized for insider trading.

Jacques Gauthier, a National Energy Board member who has already been asked to recuse himself from the Energy East proceedings because of accusations of bias, paid a $9,000 penalty after admitting he used insider information when he sold shares of a wind energy company that he presided over in 2008.

The information came to light on Wednesday, following a Radio-Canada report, the latest in a series of stunning revelations that have shaken the credibility of the embattled NEB as it reviews a flood of legal letters from First Nations leaders, municipalities and environmental groups across the country that are seeking to reset its review of the Energy East project.

The legal assault on the NEB and the Energy East pipeline has been prompted by revelations uncovered by National Observer in August that panel members met privately with stakeholders, including former Quebec premier Jean Charest, to discuss the project, despite its own rules that require it to conduct reviews in an open and fair manner. Charest was working as a consultant for TransCanada, the proponent for the Energy East pipeline, at the time of his meeting with the NEB in January 2015. Internal notes released through access to information legislation show that he gave the regulator political advice on how it could gain public support for Energy East.

The NEB's chief executive, Peter Watson participated in that meeting along with Gauthier and Lyne Mercier, and two NEB employees. Gauthier and Mercier are part of a three-member panel, with fellow Board member Roland George, who are reviewing Energy East. The NEB has now been forced to suspend its review of Energy East as it reviews the motions requesting that Board members recuse themselves from the process.

The 4,500 kilometre crude oil pipeline proposed by Calgary-based TransCanada Corp. would be the largest project of its kind in Canada, if approved, but has generated controversy due to concerns about spills and its impact on the country's climate change goals.

Business leaders, oil producers and some unions support Energy East, saying it would create jobs and contribute to the economy.

Radio-Canada, the French-language public broadcaster, reported that it called Gauthier, but he declined to comment, referring questions to the NEB's media relations department, which said the regulator was reviewing the motions seeking recusal.

Gauthier sold shares of his former company, AAER, based on privileged information, Quebec's securities regulator, the Autorité des marchés financiers, said in April 2013, at a time when Gauthier was already serving on the National Energy Board. The incident goes back to 2008, after the company lost a competition for new contracts.

"This matter involves a call for tenders regarding wind power launched by Hydro-Québec in 2005," the Quebec regulator said at the time. "Mr. Gauthier allegedly sold his shares of AAER using privileged information that was not generally known, namely, that AAER was not a successful bidder in the call for tenders."

Gauthier later admitted that he had used privileged information when he sold the shares and paid a $9,000 fine, Radio-Canada reported. The broadcaster also reported that his company would go bankrupt in 2010, a few months after receiving a $2.5 million loan from a Quebec government investment fund.

Meantime, lawyers from TransCanada appear to be concerned that the ongoing reviews and accusations of bias against the NEB may harm its plans to build Energy East.

"The Applicants request that, in the event of a recusal, the Board establish a process to hear from all parties, including the Applicants," wrote C. Kemm Yates, a lawyer representing TransCanada, in a letter sent to the Board on Sept. 7, 2016.

The Association of Power Producers of Ontario has also written to the NEB, warning that delays in its review of the recusal motions could cause market uncertainty for the province's natural gas infrastructure.

These letters followed a flood of letters from a wide range of stakeholders, including mayors from the Montreal and Quebec City regions as well as from Edmunston, New Brunswick, that expressed their displeasure with the NEB process and their concerns about bias. Several First Nations leaders also called for the resignation of NEB chief executive Peter Watson, urging the NEB to restart its review of the Energy East pipeline with a brand new panel.

The groups noted that the panel has already made several significant decisions about the review, including its determination that the TransCanada proposal was complete, despite missing details about key components such as how TransCanada would run the pipeline under major Canadian waterways.

In one of the submissions, Ghislain Picard, chief of the Assembly of First Nations of Quebec and Labrador, said that Prime Minister Justin Trudeau's government must reform the NEB from top to bottom.

"It is therefore not enough for Members Gauthier and Mercier to recuse themselves, or even for NEB Chairman and CEO Peter Watson to step down," said Picard in the letter, sent on behalf of the First Nations of Quebec and Labrador Sustainable Development Institute. "In our opinion, the entire NEB review of Energy East has to start anew. An entire new panel must be convened with members, who unlike Members Gauthier and Mercier, have no ties to the oil and gas industry."

NEB will rubber stamp this no

NEB will rubber stamp this no matter who is on the board.Wake up people.There is no middle class.Protest Protest.When you cannot feed your children what will you do?

What a stand-up group of

What a stand-up group of people on the Board. Surely the tip of the iceberg will sink this ship.
It's about time.