Where were all the Kinder Morgan pipeline supporters at the hearings? 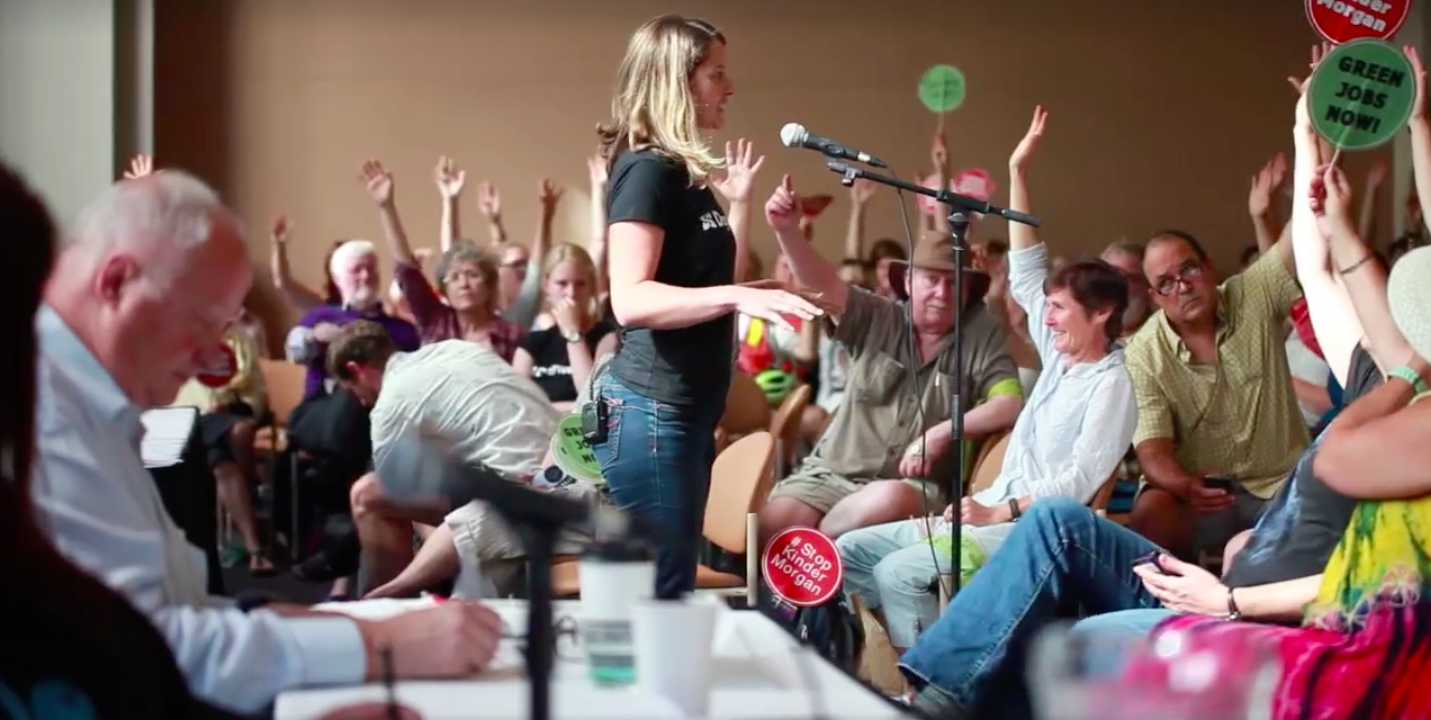 Screenshot of Kinder Morgan hearings in Vancouver in August 2016, from a Dogwood Initiative video
Previous story
Next story

When I was at the Ministerial Panel on the proposed Trans Mountain Pipeline Expansion hearings in Victoria last month I kept waiting for a Kinder Morgan scientist — or at least a publicist — to stand up and dispute all the claims that this project was a dangerous, unnecessary environmental horror show. Yes, of course, this person would be booed — but spin doctors and shills for mega-projects often get paid handsomely to smile through the jeers. And instead of celebrating the universal condemnation of the proposed pipeline expansion a sick feeling started growing in the pit of my stomach.

Where were the well-paid sock puppets making the case for Kinder Morgan?

Where were the genuinely (or artificially) agitated oil and construction workers?

Where were the company-funded counter protesters waving placards claiming B.C. needs the jobs, money and oil?

The same way hired guns bombard talk radio shows and crowd out civilian opinions on online comment sections, shouldn’t there at least be someone like Ezra Levant and his Rebel-rousers playing to the panel and taunting the crowd like the heel in a wrestling match, so the media can report the case for “the other side.”

I asked Kai Nagata, the energy and democracy director for the Dogwood Initiative whether there were shills, sock puppets or heels at other hearings across the province. His answer? Not so much.

"The Victoria, Vancouver and Burnaby town halls were 100 per cent, wall-to-wall opposed. We saw a small trickle of pro-pipeline voices at some of the industry panel sessions, and among municipal politicians in the interior (of B.C.). But in those cases they were expressing a direct financial interest — i.e. they're a construction association representing contractors, or a city council that has signed a benefit agreement with Kinder Morgan. Obviously, polling will show that a certain number of average citizens support the project in principle. But they don't seem passionate or particularly well-organized, because throughout the pipeline review none of them bothered to show up.”

I can only come up with two reasons for Kinder Morgan not sending someone to make their case to the media, the public and a panel that’s supposedly advising the government on the future of their multi-million dollar baby.

If they’d already lost, they’d have packed up their pipes.

So that leads me to suspect they weren’t attending because the decision is made, the fix is in and the key players already know who wins the championship belt in this wrestling match.

I desperately want to believe in the Trudeau government's sunny ways, but everything about this reeks with the stench of brimstone I thought we’d vanquished with the Harper era.

The NEB panel consistently chose venues too small to accommodate all the people who wanted to attend and repeatedly refused to extend stays in communities that would have allowed everyone who signed up to speak to weigh in.

And almost the only people speaking on behalf of the oil industry were members of the allegedly non-partisan panel conducting the dog and pony show.

At one of the hearings, former Yukon Premier Tony Penikett asked speakers speaking out against the pipeline in Kamloops:

“How many of you own a motor vehicle?”

That’s a perfectly legitimate and even predictable question — from someone testifying on behalf of the oil industry. But it sure as hell shouldn’t have come from a supposedly unbiased panelist. It’s not quite up there with the Alberta judge who asked the rape victim why she didn’t keep her legs together, but it’s close enough that Penikett should have been sent back to the Yukon without passing go or judgment on the proceedings.

Panel chair, LNG lobbyist, and Alberta Oil magazine cover model Kim Baird published an op-ed in the Globe and Mail that seemed a lot like a draft for her report citing four recurring themes “in no particular order” and yet in a startling coincidence the first “theme” was “impatience” from “many presenters in industry, business and labour organizations,” who want construction approved yesterday.

Her reference to “many presenters” reminds me of Donald Trump’s “some people are saying.” She may well have been hearing this from many people, but not at the panels she’s been conducting. This is what US law shows refer to as “introducing facts not in evidence” and it sure sounds a lot like someone making the case for the oil industry so they didn’t have to make it themselves.

So, unlike, some members of team #StopKM who were excited that no one showed up to promote the pipeline, colour me queasy. I just can’t shake the feeling that the reason the only people in attendance at the public hearings were the ones opposed to this environmental obscenity was because this was an insulting exercise in optics so our government can claim the people have been heard, before revealing they were only listening to Kinder Morgan.

If you’d like to find out if anyone is listening, you still can. The NEB questionnaire is available online until Sept. 30 here.