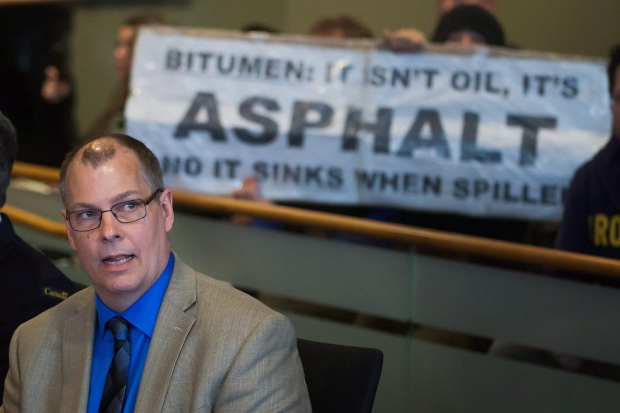 National Energy Board chairman Peter Watson addresses a crowd in Burnaby, B.C. with protesters in the background in 2015. File photo by Canadian Press
Previous story
Next story

The panel reviewing the Energy East pipeline has recused itself in the wake of revelations uncovered in August by National Observer.

The hearings have been adjourned and Peter Watson, the chairman and chief executive of Canada's National Energy Board has also recused himself from any duties related to the review of Energy East.

But the Board said that there would now be no need for a full investigation, as requested by several stakeholders. It also said it was no longer necessary to release additional information about the private meetings that have prompted a public outcry.

The NEB decisions were announced Friday on the regulator's website following legal motions and public controversy over a private meeting that panel members held with former Quebec premier Jean Charest in January 2015, while he was under contract with pipeline company TransCanada Corp.

Charest gave political advice to the Board about how to build public confidence for the Energy East project, according to internal notes released through access to information legislation. Critics say this demonstrated that the review was tainted since NEB rules require all meetings and discussions about a project under review to be public and transparent.

The hearings on Energy East have been adjourned until the government names new bilingual board members who can serve on the panel.

The stunning decision comes after a series of legal motions and letters, launched by environmental lawyers in Ontario, Quebec and Alberta, who called for the recusal of Board members from the Energy East process over the appearance of bias. First Nations leaders across the country have also demanded that the review process for Energy East restart from the beginning.

Jacques Gauthier, the Board member who invited Charest to discuss Energy East in a private meeting, was still defending the meetings on Friday, but he blamed the former Quebec premier for not being transparent about his contract with TransCanada.

"As with all of the meetings held as part of the National Engagement Initiative, the purpose of the meeting with Mr. Charest was to get a clear understanding of the concerns of Quebeckers regarding the Board, pipeline safety, and environmental protection," Gauthier said in a letter released on Friday by the NEB. "That being said, this meeting would never have taken place if we had known that Mr. Charest was at that time a consultant for TransCanada PipeLines Limited, one of the applicants. However, neither Mr. Charest nor his people informed us that he was a consultant for one of the applicants at that time."

Fellow panel members, Roland George and Lyne Mercier, also agreed to recuse themselves from the panel in order to protect the integrity of the National Energy Board.

Peter Watson, the NEB's chief executive, also acknowledged his participation in the private meetings with Charest and other stakeholders in January 2015 has "cast a doubt" on his ability to exercise specific duties related to the Energy East review, so he has agreed to recuse himself from those discussions.

In a statement, TransCanada Corp., the Calgary-based company proposing to build the 4,500 kilometre Energy East, said it accepted the decision.

"We look forward to the sessions resuming and a respectful and constructive dialogue with Canadians about Energy East," said TransCanada spokesman Tim Duboyce. "The NEB hearing process is important to TransCanada. It is a formal, open and transparent way to further address people’s questions and concerns, while building knowledge and understanding about the project."

The office of Natural Resources Minister Jim Carr said that the NEB would determine the next steps of the hearing process.

"Our government is committed to an open, fair, inclusive and transparent process for decisions on major energy projects," said Carr's press secretary, Alexandre Deslongchamps in an email to National Observer.

"While it is unfortunate that the circumstances have delayed the regulatory review for this project, independence and neutrality are fundamental principles for all of Canada's regulatory institutions, including those reviewing major projects such as the National Energy Board."

Deslongchamps added that the selection process for new Board members was ongoing.

"Earlier this year, the government of Canada launched a competitive process for temporary members to the NEB in support of the proposed Energy East project. This will create a pool of qualified candidates that could be appointed as NEB Board members."

If approved, Energy East would be the largest pipeline project ever proposed in Canada. Critics say it is too risky and would put Canada's climate change goals out of reach, while supporters say it will encourage jobs and growth in Canada slumping oil industry.

Who has come off unscathed in

Who has come off unscathed in all of this is Mr. Charest. One would have thought that he would have disclosed his client relationship with Trans Canada to the NEB prior to discussing the Energy East matter. That's inexcusable - a politician of Mr. Charest's long standing would be well aware of conflict of interest guidelines.

slumping oil industry... but thats the point, isn't it.
It needs to slump to nearly zero by 2040.
And as for jobs, there just as many if not more in #cleanenergy.

What a corrupt sham.

What a corrupt sham.
Canada is no longer a nation of Canadians.

Incredible work National Observer staff, you have done a fantastic job! The NEB staff continue to change their stories and I suspect they are capitulating in order to stop a formal investigation. It makes me suspect that what's been uncovered thus far is just scratching the surface of their dirty dealing.

The recusal of the panel and president is positive. However, the motivation for recusal appears to include the avoidance of transparency. A full investigation Is still necessary

Recusing himself is not good

Recusing himself is not good enough. He needs to resign. An investigation into this corrupt board still needs to go forward.

The Minister's press secretary says they are looking for new board members in support of the proposed Energy East project. Is this true? If so it means these NEB members will be biased before they even start.