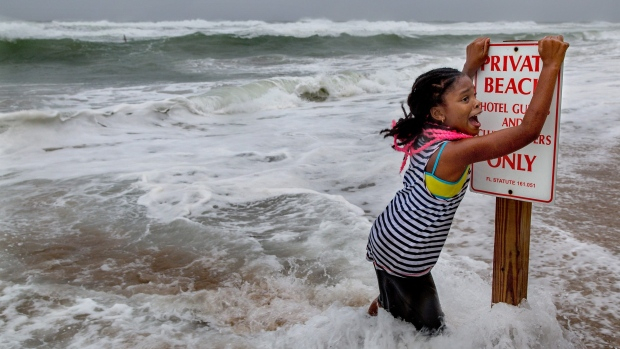 After battering the Caribbean, Hurricane Matthew reached the shores of Florida early Friday morning. It's been called the strongest storm to threaten the U.S. coast in over a decade, and has already closed airports, rail service, and turned Florida highways into one-way routes inland. About 1.5-million Florida residents have fled their homes in search of safety.

Rob,right, and his son Robbie survey an uprooted tree in a neighbors yard, a casualty of #HurricaneMatthew pic.twitter.com/LzLRO4D7hO

Officials are estimating that Hurricane Matthew was responsible for the deaths of at least 1,000 people in the Caribbean earlier this week. According to Reuters, Haiti, which was bludgeoned by Matthew earlier this week, blames 842 deaths on the impact of the storm.

Winds of over 160 kilometres per hour were measured at Cape Canaveral Friday morning, and storm warnings were issued across the state. According to the New York Times, officials have now turned their attention to Jacksonville, which is expected to see serious damage.

The centre of the hurricane was less than 30 miles east-northeast of Daytona Beach as of 12:00 p.m. Florida Governor Rick Scott said that 600,000 buildings have lost power in Florida, while over 20,000 residents have moved to shelters.

Large parts of a hotel coming off in Daytona Beach, Florida. #HurricaneMatthew#Matthew pic.twitter.com/54WZtv0lnV

But much of Florida avoided the worst of what the Category 3 storm had to offer as it skidded along the coast without causing massive damage. Now, hurricane and tropical storm warnings are creeping up the eastern coast of the United States as Matthew turns northward.

Derrick Henry, Mayor of Daytona Beach, told residents to “exercise prudence” in the wake of the storm, saying the worst is yet to come.

People are really relating to this lone car driving the opposite direction of Hurricane Matthew evacuees https://t.co/idcm6oDBzu pic.twitter.com/4FmmriK0lz