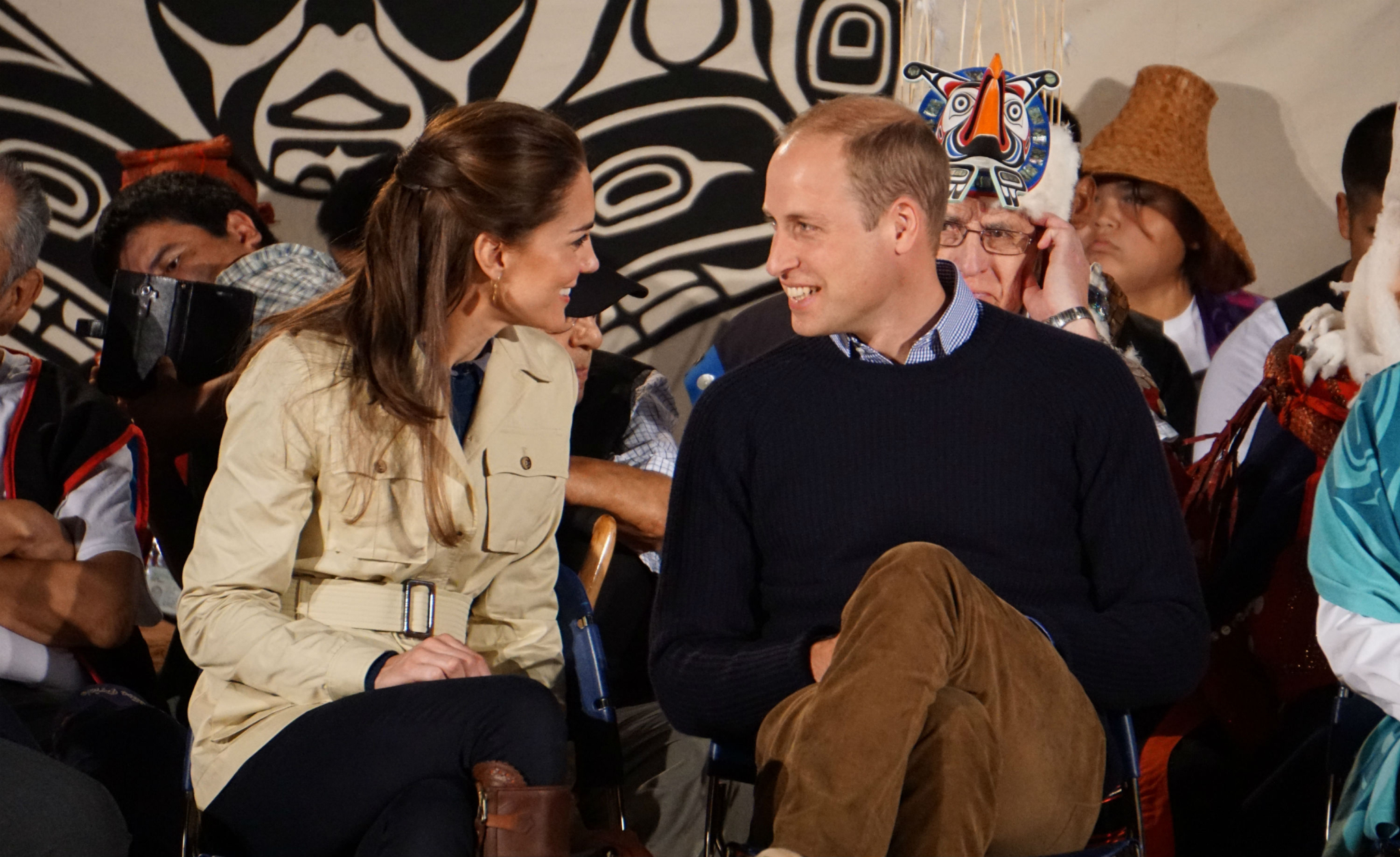 The Duke and Duchess of Cambridge dedicated the Great Bear Rainforest to the Queen's Commonwealth Canopy Initiative on Mon. Sept. 26, 2016 in Bella Bella, B.C. Photo by Elizabeth McSheffrey.
Previous story
Next story

Alana Windsor could barely contain her excitement in the minutes before the Duke and Duchess of Cambridge arrived in Bella Bella, the traditional home of the Heiltsuk First Nation, and gateway to British Columbia’s Great Bear Rainforest.

Her hands rested calmly on her lap despite her nerves — she had sewn the buttons onto a vest that would be gifted to Prince William, and for some reason, was worried he might not like it.

“I’m really excited about what’s going on today,” she said, “a bit nervous now, but it’s so exciting.”

Earlier this year, the B.C. government, First Nations, environmentalists, and the timber industry announced landmark conservation legislation after reaching an agreement to protect 85 per cent of the rainforest from logging. It includes an innovative program of ecosystem-based management that enhances the richness of the rainforest, along with the cultural and economic resources of Indigenous people who live there.

Prince William said the unique partnership sets an example for other countries in the British Commonwealth.

The lights were dim in the town’s community hall for the ceremony on Monday, which had been decorated in spectacular fashion with Heiltsuk canvas art and wood work. The nation’s chiefs wore rich, red regalia and waited to welcome Will and Kate into their traditional territory.

“I’m proud to be a Heiltsuk member,” said Windsor, as the sudden movement of security guards indicated the royals were on their way. “All I can say is I hope for the best and I hope everything goes well.”

While the royals made a rather understated entrance, the grandeur of the ceremony that followed made the parents in the room beam from ear to ear. After Will and Kate had greeted the chiefs, the children of Bella Bella — dressed head to toe in traditional garments — shared dances they had learned in school.

The girls twirled button blankets and the boys fired invisible arrows from wooden bows. The Duke and Duchess applauded enthusiastically, and after hearing bits and pieces of Heiltsuk history, were gifted with traditional blankets and Windsor’s buttoned vests.

“You grace Heiltsuk territory with your presence,” said Hereditary Chief Jim White. “The community was so, so proud that the organizers — and I trust yourself, Prince William — have elected to come into the Great Bear Rainforest that we, and our forefathers, have retained trust and good stewardship.”

A jewel in the crown of Canada

On Monday, the royals endorsed the rainforest and its conservation — achieved only after two decades of tense negotiation — to the Queen’s Commonwealth Canopy (QCC) initiative, which strives to unite the Commonwealth’s 53 members in conserving forests for future generations. The province submitted the rainforest's candidacy earlier this year, adding Canada to a list of 15 other Commonwealth countries that have dedicated forestry projects to the QCC or are planting new forests in its name.

“This is a statutory dedication which will highlight a long collaborative approach to sustainable forest conservation,” Prince William told reporters in a short speech after the ceremony.

“Other Commonwealth countries will benefit from sharing the knowledge and expertise you have gained by working together with First Nations, industry and environmental organizations to establish a unique forestry management program.”

At the dedication, B.C. Premier Christy Clark announced a $1-million trust fund to commemorate the visit of Their Royal Highnesses, and spread the legacy of the rainforest’s conservation.

“We have worked on this in earnest for about a decade to come to an agreement,” the premier told reporters. “It was a long hard negotiation, but we all recognize we have a unique responsibility too preserve this jewel for the world.”

The new Great Bear Rainforest Education and Awareness Trust will develop student and teacher resources for learning about the rainforest, support new research and resource-based management education, and raise public awareness of the rainforest and its Indigenous peoples. It will be operational later this year, with fund disbursements overseen by an advisory board of government, First Nations, and stakeholder representatives.

After the dedication, Will and Kate had an opportunity to view part of the rainforest itself as they unveiled a commemorative plaque in McLoughlin Bay. Their other touring activities, including an aerial tour and a boat tour, were cancelled as a result of stormy weather.

The couple appeared, as scheduled however, in Victoria on Monday evening for the Black Rod Ceremony.

That morning, the Union of BC Indian Chiefs announced that it would not be sending their own representatives to this ceremony — meant to symbolize reconciliation between B.C. First Nations and the Crown — in protest of slow government progress towards improving quality of life for Indigenous people.