By Krystle Alarcon | News | October 14th 2016
#4 of 35 articles from the Special Report: Syrian Refugees in Canada 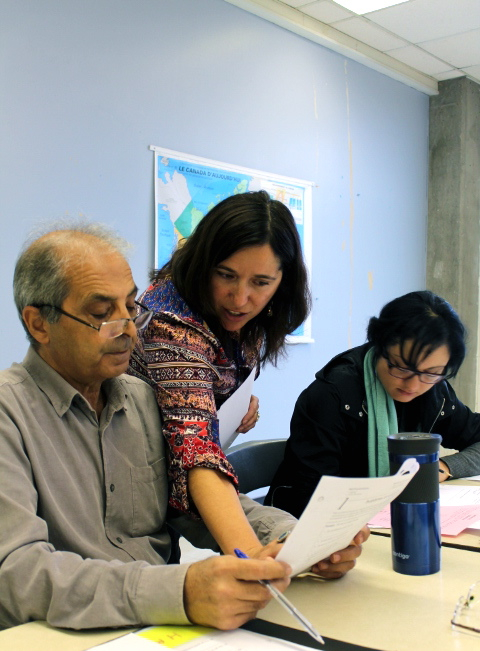 Hrant Basmajian asks a question to his teacher, Madame Virginie Stinat -- he is one of five Syrian refugee students in an advanced Level three course in Montreal's Centre William-Hingston. Photo by Krystle Alarcon
Previous story
Next story

Family photos laminated onto wood planks hang above Hrant Basmajian’s couch in his two-bedroom apartment in Montreal's Ville Saint-Laurent. The photos feature more than two dozen of Basmajian’s family, including his children and in-laws. The younger ones stand tall above the elders, who are sitting on upholstered couches with wood trim. There are two Persian rugs beneath them. It’s obvious Basmajian was well-to-do before fleeing Syria and landing as a refugee in Montreal.

Asked if he was rich, he humbly says, “We were comfortable. I had two houses. This one was in Kessab and it had a pool,” he says with a gleaming smile. Kessab is a tourist town surrounded by mountains and valleys, he explains. His other house was in Aleppo.

Basmajian currently studies full time at the Centre William-Hingston, an adult education center in Parc Extension that teaches French to newcomers and immigrants. Jean Dupont, the school’s director, says that with around 500 students are enrolled in the school, Syrian refugees make up half of the student body.

Basmajian had to abandon two houses and two restaurants to escape his war torn hometown, but he does not look like a weathered man. He wears jeans carefully pleated straight down the middle and a royal blue plaid collared shirt when he sits down to speak with National Observer.

He repeatedly speaks of his gratitude to Canada. “People are humane here... They take care (of us). Like, the medical care. It's something we haven't even imagined. They do give more than other countries,” he says.

And he says it all in impeccable French.

Basmajian lived in France as a university student in the seventies and still has a Parisian accent.

But he wanted to go back to school to refresh his memory, not having spoken the language for 30 years. He also wants to take his time to learn more about Quebec culture and reflect on whether or not he can open a Syrian restaurant in the city one day.

Basmajian has only good things to say about the Centre William-Hingston, “Ils essaient de nous aider… de faire voir le chemin de la vie (they try to help us ... to find our path in life)."

Basmajian is one of 25,000 refugees who has arrived in Canada since November 2015. Quebec’s ministry of immigration says that almost 4000 came to Montreal, and a total of 2,971 study French in the province. Basmajian arrived with his wife in late January. His son and daughter landed the month before.

The 70-year old businessman is quick to explain that he and his family pay for their own apartment and living expenses. Privately sponsored by his wife’s aunt, they do not receive social assistance like government-settled refugees. They bought all the brand new furniture in their apartment, the Ikea-style couches, arm chairs, flat screen TV, and the shelf decorated with Persian bottles and vases.

In his French course, Basmajian sits at the back of his class and concentrates hard. At one point Madame Virginie Stinat, the Level 3 teacher, asked her students how to spell “jettes” (you throw) when conjugating with the pronoun “tu." The students yell out different ways of spelling the word. None get it right and they giggle at their attempts.

Since her students hail from Moldavia, Colombia, Ukraine, Algeria, Turkey, Syria, and Pakistan, Stinat jubilantly explains that the class truly represents “le programme de francisation,” a provincial program that aims to have immigrants speak the French language and integrate into Quebec's society.

One of the most challenging parts of teaching Syrian refugees is to discourage them from speaking Arabic or Armenian amongst themselves, she says.

“They have a tendency to translate all at the same time into their language. But it’s not just Syrians who do this, it's always the problem when you have a lot of students of the same origin. We don't use maternal languages as much as possible. For example, in my class, there aren't a lot of students who speak English. So, we're not going to translate everything to English because not everyone speaks English.”

Syrian refugees are not obligated to study French, but most of them do, according to Faisal Alazem, Montreal director of the Syrian Canadian Council. The course helps them integrate into Quebec. A financial incentive from the Quebec government is an additional motivator. Alazem says privately sponsored refugees receive around $400 per month to pursue full-time courses, while government-supported refugees, identified by the United Nations, receive around $200 per month because they already get social assistance, in amounts similar to welfare.

Churches sponsor most Syrian refugees in Quebec, he explains. “Because sponsors are measured by assets – they are usually eligible because they own their land and their buildings and this opens up more sponsorship. Compared to mosques, which are renting an apartment, for example.”

Syrian refugees who settle in Quebec face more of a language barrier than their counterparts in other provinces, Alazem says. Most Quebec government sites are only in French and “[the refugees have to] rely on volunteers or community centers to help them and fill up the paperwork and go through the bureaucracy."

The Syrian Canadian Council provides information sessions to the refugees, for “simple things that we can take for granted,” like knowing the difference between going to the hospital versus a clinic. Alazem estimates that the council’s members have met most of the 200 government-assisted Syrian refugees, but know much less about the privately sponsored refugees, since they rely on their sponsors for support.

Alazem says the council faced an emergency situation in January when most of the refugees arrived, all hoping to register in a French course. Some had to wait up to six months before getting a spot.

There were at least four or five extra classes created in January just to accommodate the influx of Syrian refugees. The situation is now stabilized and most refugees have found a school.

Asked why he himself has become so involved with helping Syrian refugees, Alazem says, “Well, that could have been me. I wake up every morning thinking this. It’s the least I can do to try to alleviate their suffering. If I applied to study here in these times, I would not even receive a visa [here] or anywhere in the world. Today, I’m working, happy, successful, stable, safe… just because my timing was right.”

Basmajian’s timing wasn’t as lucky. But he’s a self-proclaimed optimist and describes his new life in Montreal in an uplifting tone. Mentioning Aleppo is the only time Basmajian's happy demeanor crumbles.

“You know, it is God who will decide,” he says, in a solemn voice.

Basmajian has only one sibling left in Syria. She's in Damas, about four hours away from Aleppo.

“But she wants to stay,” he says, gulping.