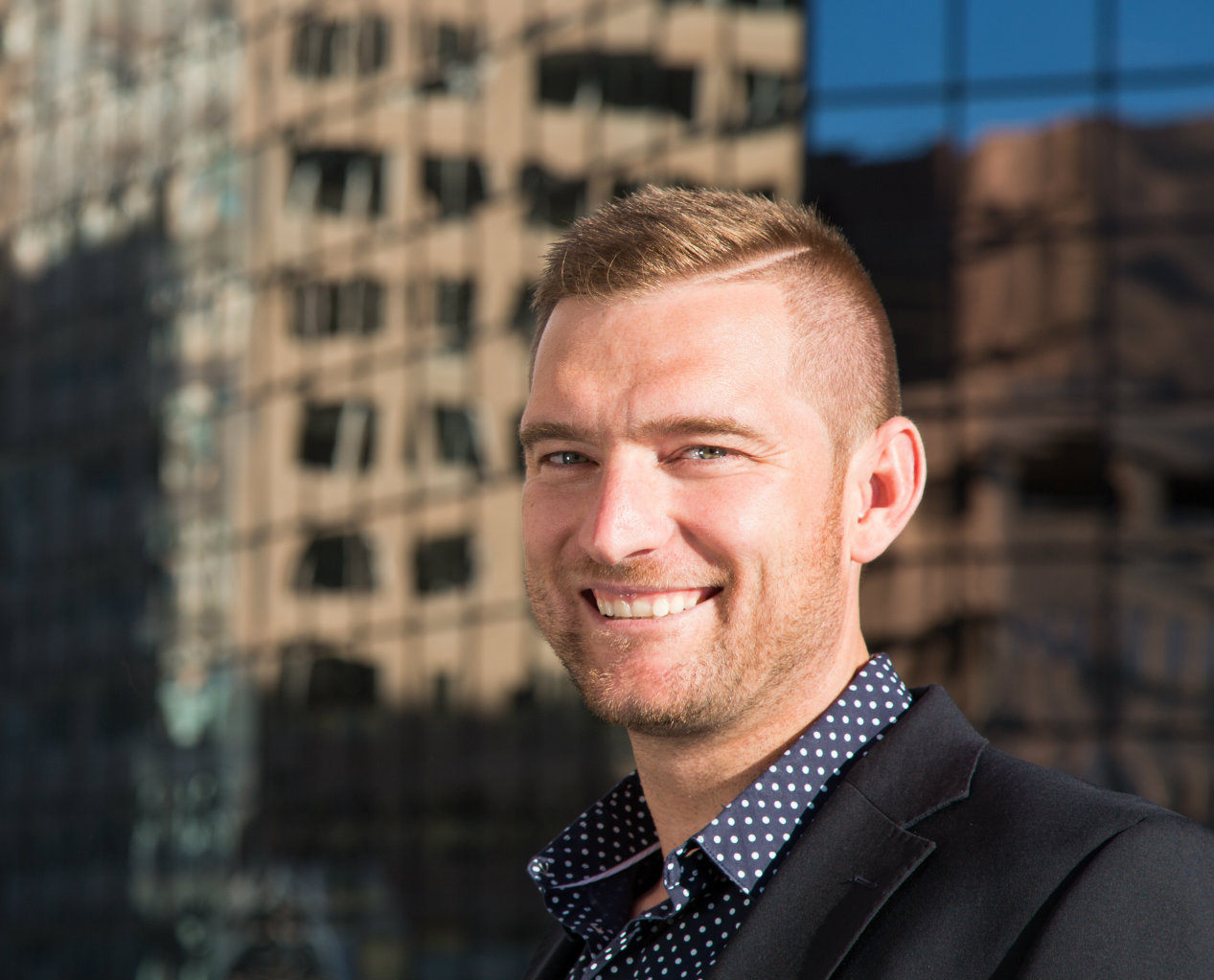 A young woman dreams of traveling the world and connecting with new people and cultures, but feels stuck in a small town. A photographer feels a deep passion for the protection of wild animals, but is caught up in day to day tasks to pay the bills.

What can people do to get in touch with their dreams and inspiration without leaving everything behind to pursue a radically new path?

What does it mean to live a successful life?

It’s hard to imagine today, but Dave C. Bonk, the clean-cut, handsome Calgary entrepreneur who has become so successful at helping others find meaning, was once a troubled teen, a high school dropout and homeless with only grim prospects for the future.

“I was 15, sitting on the side of the road with my garbage bag full of clothes," Bonk said. He'd just been betrayed by a friend, who had tried to rob him of what little money he had and was at his lowest ebb, looking up at the sky and wondering what tomorrow would bring. Then a certain phrase appeared in his mind, changing everything.

"I’d heard somewhere, the phrase that if you achieve enough of what this world calls ‘success’ and ‘happiness,’ one day, people will ask you what the secret to it is. I just decided that was what my purpose would be.”

He laughs knowingly as he adds, “At that age, you can imagine what I thought success and happiness was. It was like, money, women and stuff.”

After that epiphany on the side of road, Bonk set out to make a success of himself. He slept on whatever piece of carpet or couch he could find, relentlessly applying for jobs. He landed work as a floor installer — although he didn't even have a vehicle like the job posting required — and climbed his way up the ladder, eventually launching his own flooring business.

By 25, Bonk had already fulfilled his goal of finding conventional “success.” He could look out the window of his own house and see his six cars parked out front. He kept in good shape, and even worked as a part-time model.

But the “happiness” part of his goal turned out to be much more difficult to grasp. Bonk was well off financially — and completely burned out. Even though he had all the outward signs of living a good life, something wasn’t clicking on the inside.

“I thought this was the life. But I was running out of steam,” Bonk reflects. “And I realized I was totally being driven by what I thought other people wanted to see.”

Bonk didn’t know it at the time, but he was beginning a multi-year journey to answer universal questions that face most of us at some point: what do we really want to do with our limited time on earth? What do we expect from this life?

After years of soul-searching, Bonk is now focused on helping others create more harmonious alignment between their values and their day-to-day activities— something that he tackles as part of his Find Your Why project. He started a company, Social Impact Entrepreneurs, to help people take the steps to incorporate their 'Why' into their current job and life.

The disconnect between people’s core beliefs and their day-to-day jobs is a widespread problem that affects millions of working Canadians. Only 16 per cent of Canadians feel engaged with their daily work, according to a survey published in Harvard Business Review. The lack of engagement manifests itself as burnout, sick leave, and low morale. Given that an adult might clock over 90,000 hours at work over a 50-year professional life, that's a lot of time to be feeling disengaged. And while some people might feel that their current work doesn’t fit with their life's mission, others have the bigger problem of not even knowing what that mission is in the first place.

“Our society typically uses, GDP to measure the economic health of our country,” Bonk said. “So why are we using that as the only measure of whether a society is successful? We're born into it. We didn't choose it.”

Before launching the Find Your Why project, Bonk had already built a successful career in real estate and had founded a nonprofit called Hearts and Hammers providing home renovations to people with mobility challenges, to help them (and their caregivers) move more easily through their house. But despite the accolades and media attention for Hearts and Hammers’ work, Bonk felt he wanted to expand his impact. Instead of just helping remove physical obstacles to mobility for people inside their homes, he wanted to focus on on removing the obstacles that blocked people out in the real world.

So, he began to hold workshops, advertised in a low-key way on his Facebook page, focused on helping people find their unique “Why” and to integrate it into their existing business or lifestyle.

“The workshops just fill up,” Bonk said. “A certain group of people — a large number of them are business owners and entrepreneurs — are especially drawn to it.”

Especially since the loss of jobs in the oilpatch, he said, many Albertans especially have been considering what they truly want to do, and what projects they'd always wanted to pursue.

Bonk said much of the Find Your Why workshop revolves around a supportive group of eight to twelve people, asking questions. They create the space for people to step away from their daily grind, away from the urgent emails, and take a broad, big-picture view of life that often gets lost in the shuffle.

“We ask questions, and peel back the layers, until people uncover it for themselves,” he said. “You could tell when people get to their ‘Why’ — they say, ‘if I had access to this every day, my life would be awesome.’”

Bonk said that while these questions might seem unimportant in the day-to-day urgency of life, they're vital to leading a good life.

“We all know we're dying right now. We may not think about it all day, but I think a fear we all have deep down is, am I going to be able to shine my light or be all that I can be before I die? That is the obstacle I'm really working with.”

Although a handful of people in his workshops respond that they simply want to make more money, Bonk said people more often than not have other deeply felt ideals, many of which involve helping others.

Start where you are

After taking the workshop many people make substantial changes but the program emphasizes finding ways to integrate the changes into their existing lives.

Bonk relates the story of one participant — an artist and photographer who discovered that his "Why" was raising funds to protect wild animals. Before that realization, he was just running his daily business as a photographer, doing photo shoots and managing accounts. After the workshop he began painting animals, raising funds and working in partnership with the Calgary Wildlife Rehabilitation Society.

Another woman from a small town came to the workshop frustrated because she thought she already knew her passion — she wanted to be traveling the world. Bonk thought there was something more to her response, so asked her to unpack her "Why," and she said she really wanted to travel because she likes to connect with people from different cultures. But it was impractical to quit her job and backpack around the world for a year. Bonk helped her apply the “Why” within her present circumstances, by setting up a welcoming group for newcomers and helping them settle into town.

Attendees say that once they were able to identify their "Why," everything else soon fell into place. Initial agony about their situation developed into action plans about doing the kind of work they felt they were born to do.

"I was fortunate enough to be part of one of Dave's Find Your Why workshops back in June and it helped me define my goals as an entrepreneur and uncover more about my goals of where I'd like to take my business," said Alison Masniuk, a Calgary-based social media specialist and consultant, in a testimonial. A young mother struggling to maintain work-life balance, Masniuk said the workshop allowed her to uncover the purpose behind her work — to enable people to believe in themselves, so they can realize their capabilities.

"Uncovering my ‘Why’ has impacted my life by allowing myself to step out of my comfort zone to create unique content in diverse industries," she said.

What’s striking is that the workshops aren’t made to steer people toward making radical, irrevocable changes in their career. They push people to start where they are by incorporate their "Why" into their current life and move toward their goals, rather than make extreme changes that destabilize their lives overnight.

Bonk said continuing to switch careers and start over from scratch until you find one that you love is “dangerous advice,” which he knows from personal experience.

“It’s just not logical,” he said. “What about people who are barely surviving in Africa? What about all the people in Vancouver, and Calgary, who have debts and families and disabilities?" Jumping from career to career might make sense for single, childless and financially secure individuals, but it's unrealistic for the majority of people, he concluded.

Bonk feels there’s a huge gap and missed opportunity with the conventional expectations around businesses and nonprofits today. After founding his own nonprofit, he found that nonprofits struggle to bring in the revenue required to fulfill their mission, while businesses are expected to maximize profits, above all else. Bonk believes increasingly, businesses in the 21st century have to have a cause other than maintaining a healthy bottom line. And he may be on to something—this week, his social entrepreneurship work was recognized with a Social Innovation prize at the Soul of the Next Economy 2016 Ultimate Social Innovation Challenge in Calgary.

Bonk said that tackling social and environmental causes was too large a challenge for nonprofits and governments to do alone, and believes more people in the for-profit sector would be able to have a tremendous impact if they questioned how they could use their skills in personally meaningful ways.

“I want people to be able to choose — not just from giving to nonprofits — to be able to act on issues like social and environmental impact,” he said.

Bonk's short term vision is to to put 300 people through his workshop in Alberta by the end of Dec 2016 (he is currently about 25 per cent of the way there), resulting in the creation of at least 30 social/environmental impact projects. Eventually he envisions spreading across all of the Canadian provinces creating Social Impact Entrepreneurs grounded in their own "Why."

Can the vision be achieved? It’s hard to see why not: Bonk has managed to beat seemingly impossible odds so far, and already has a string of workshops planned out.

“Everyone is an expert at something. Everyone has a gift to offer,” Bonk said. “Sometimes that's to another person. Sometimes it’s to a specific group of people. Sometimes it's to an animal or to an acre of rainforest.... With Find Your Why, I want revolutions to start happening with individuals, for people to starting to look at a different measure of how their life is successful and what is fulfillment.”

Dave C. Bonk's Find Your Why workshops are made possible with support from the following team:

Editor’s Note: This article is part of a series of pieces National Observer produced as Kickstarter rewards. Those featured here backed our April fundraising campaign, 'Reports from the Race Against Climate Change,' helping to provide National Observer resources to produce 600 articles and innumerable videos and photographs. Go here to fund more coverage.