Opinion: HFCs and Aviation head in opposite directions with global climate pacts 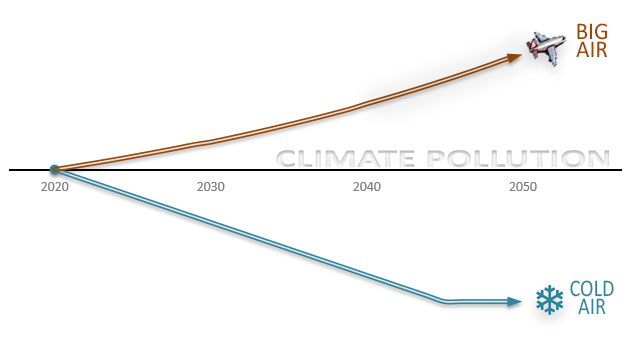 In the wake of the historic Paris Climate Agreement, two global sectors -- Cold Air and Big Air -- recently signed their own high-profile climate accords. But the similarities end there. One commits to declining emissions. The other leaves them soaring.

To illustrate, I compared aviation and air conditioning (HFCs) on the same chart. You can quickly compare how each accord proposes to change their emissions.

Here are the details…

Hydrofluorocarbons (HFCs) can be potent greenhouse gases. They are primarily used in air-conditioners and refrigeration. According to the International Panel on Climate Change (IPCC), some HFCs are thousands of times more climate warming than CO2.1

This October in Kigali, nearly 200 nations pledged to reduce HFCs "more than 80 percent over the next 30 years" (White House Fact Sheet). US Secretary of State John Kerry said the phase down could single-handedly "avoid up to half a degree Celsius of warming by the end of the century."

The blue lines in my chart show the details. There are two main tracks. Wealthier, developed nations pledge to start now and reduce their HFC emissions 85% by 2036. Developing nations will start in 2020 and reduce 80% by 2045. Globally, HFCs will decline somewhere between these two lines -- in the area shaded light blue.

Earlier this year in Paris, nearly 200 nations agreed to limit global warming to as close to 1.5 degrees as possible. The woman who led the multi-year effort to secure the dramatic Paris Agreement, Christina Figueres, makes clear what that means:

"achieving this goal must be marked by a peak of global emissions and a steep decline immediately after … which will only happen through urgent action by all – every country, every community, every company."2

The HFC industry's plans for a fairly quick peak followed by a steep decline towards zero is in the general spirit of this global Paris Climate Agreement.

In contrast, the other recent global accord doesn't even aim for lower emissions ... ever. This accord is called CORSIA. It's the international aviation industry's new CO2 offset scheme.

The governing body for international aviation is the International Civil Aviation Organization (ICAO). They estimate that even under their "most optimistic" scenario for technology and operational improvements, the industry will increase their fuel burn by 140% between 2020 and 2050. And their emissions are estimated to rise roughly the same amount. My chart shows this emissions trajectory as a rising brown line.

Under the new CORSIA offsetting plan, any CO2 emissions above their 2020 baseline level will be "offset". The industry will pay someone else to cut CO2. They will then use these reductions to "offset" their own rising CO2 in the book-keeping. My chart shows this net CO2 goal as a flat dashed brown line.

Failing to aim for lower CO2 levels -- even via offsets -- is clearly not in the spirit of the Paris Agreement that requires a "steep decline". But that's only half their climate pollution failure.

The IPCC says that jet engines emit both CO2 and non-CO2 forms of climate pollution. The CORSIA accord only offsets the CO2 portion. That means even under CORSIA, international aviation's total climate pollution will continue to rise rapidly through 2050 and beyond.

Because there is still some scientific uncertainty about the exact quantity of warming from the non-CO2 emissions, I've provided three illustrative scenarios in my chart. These three rising dashed lines show three possible emissions paths under CORSIA. They differ in how much warming the industry's non-CO2 emissions cause.

The result of CORSIA ignoring the non-CO2 portion while not lowering the CO2 portion, is that the industry's total climate emissions will continue to soar under the plan.

To make matters worse, offsets don't always deliver the CO2 reductions they promise. And so the industry's net CO2 is likely to keep rising even after subtracting their offsets.

An editorial in Bloomberg, "A Weak Deal on Airplane Emissions", pointed out that "the deal may not meet even its own low bar" of continuing to emit the same amount of CO2 every year after offsetting. That's because "even the most rigorous offset programs raise the risk of double-counting, awarding credit for carbon reductions that would have happened otherwise." It concludes: "it doesn’t help to merely pretend to cut carbon emissions."

George Monbiot writing in the Guardian sounds the same warning about offsets that don't work as advertised. He says CORSIA offsets are especially unreliable because they rely on planting trees, "a highly unstable one vulnerable to loggers, fires and droughts." Those of us in BC can add "warming-induced beetle slaughter" to the list. Monbiot concludes: "The meeting at which the deal was done probably caused more emissions than it will save."

Even flat CO2 means up, up and away

It gets worse. Even if the industry only emitted CO2 and they perfectly offset it back to constant annual emissions levels -- the climate damage will still keep rising rapidly. Sadly, constant levels of CO2 emissions is neither stable nor neutral when it comes to climate change. Here are three ways that flat CO2 levels leads to rapidly rising impacts…

That's based on the US Government's Social Cost of Carbon calculations. This gets used in all kinds government decisions to determine costs and benefits from CO2 changes. It's "an estimate of the economic damages associated with a small increase in carbon dioxide emissions, conventionally one metric ton, in a given year."

Damages are estimated to rise by 65% per tonne between 2020 and 2050 (in constant dollars)4. Each tonne emitted does more harm to society as the years go by.

Flat CO2 levels each year cause rising CO2 levels where it matters most -- in our air and oceans.

The entire reason we have a climate crisis in the first place is because CO2 sticks around, accumulating in our air (global warming) and our seas (ocean acidification). In fact, ten percent of the CO2 we emit today will still be there, affecting the global climate and oceans tens of thousands of years from now!

New additions of CO2 each year just pig pile on top of what is already up there. And we humans are finding ourselves literally and figuratively at the bottom of our growing CO2 pile. The bigger the pile the worse the climate damage.

Here's a chart of NOAA's global CO2 data to illustrate. As you can see, global CO2 additions each year are relatively small (orange bars). But they quickly accumulate on top of each other into an ever rising climate threat (orange line). That's why the Paris Agreement requires a quick peak followed by a "steep decline" in annual emissions.

The aviation industry likes to point out that they are currently 2% of global CO2 emissions each year. What they don't point out is that their plans demand around one third of the world's entire remaining 1.5C carbon budget.

That's according to an analysis of aviation's CO2 plans by CarbonBrief. It estimates that international flights alone will gobble up 20% of the world's 1.5C carbon budget by 2050. Add in domestic flights and the industry requires 30%. And that still doesn't include all of aviation's non-CO2 climate pollution. Oops.

Grabbing a third of the world's 1.5C carbon budget is an interesting goal for a sector that produces around 1% of global GDP.5 More like an own goal for humanity.

No peak. No decline. Aviation's share of humanity's carbon budget keeps rising rapidly through 2050 and beyond.

The industry contributes nothing until after 2020. Even as far out as 2030 -- the critical Paris Agreement's target year -- the industry plans to have only purchased 8% of their proposed offsets.6 In fact, the ICAO brags about how little their scheme requires of them:

"The estimated offsetting cost in 2030 is equivalent to that of a 2.60 US$ rise in jet fuel price (per barrel) … To give a reference on magnitude, over the past decade the standard deviation of the jet fuel price annually has been almost 40 US$ per barrel, meaning that airlines have managed to cope with oil price volatility (mostly upwards) of more than 15 times the size of the estimated offsetting cost in 2030."

Even decades from now in 2040 their CORSIA scheme still exempts over half the industry's annual CO2 emissions from paying any fee on their climate pollution.

Pretty clever, right? The aviation industry has designed their CORSIA scheme so that it:

Unsurprisingly, this low-ambition scheme leads to rising overall climate pollution; rising CO2 in air and oceans; rising economic damages to society and rising demands on world's carbon budget. Up, up and away.

Of course, all this is both understandable and excusable because the people who fly are among the world's poorest and most destitute. They can't be expected to pay the actual costs of their jet-setting climate pollution.

Not now. Not ever.

Footnote 1: The IPCC's latest report (Fifth Assessment in 2013) lists over 50 kinds of HFCs in Table 8.A.1. These HFCs have 20-year global warming potentials that range from those that are less warming than CO2…up to HFC-23 that is 10,800 times more warming than CO2.

Footnote 3: For those that want a quick dive into the climate science, here is an overview of the non-CO2 emissions from jet engines. The IPCC, at the request of industry and in tandem with industry, produced a Special Report on Aviation. It identified a basket of various climate emissions from jet engines. These include CO2, NOx, H20, sulfates, black carbon and the formation of contrails and cirrus clouds. As you might imagine, the chemistry of jet exhaust plumes packed with various hot gases and countless particulates (10 quadrillion per kg of fuel!) getting dumped into high altitudes … involves some uncertainties. The uncertainties are greater for the non-CO2 emissions than for CO2. In their special report the IPCC provided a range of probable values for how much each component was currently warming our planet. At the low end they estimated that non-CO2 emissions together are a bit less warming than the CO2 portion. In other words, aviation's total climate warming today is almost double that caused by their CO2 portion alone. At the high end, the non-CO2 portion is three times more warming than CO2. Their best estimate is 1.7 times more warming than CO2. These estimates were for the year 1992 and did not include what is now viewed as the biggest cause of jet exhaust induced warming today: contrails creating cirrus cloudiness. The science was too uncertain at the time. More is now known and the most recent IPCC report (AR5 WG1 2013) estimates that this contrail/cirrus effect alone could be currently warming the planet as much, or more, than the CO2 portion. In climate speak its effective radiative forcing is estimated at 0.05 W m–2 in 2011. For comparison, all HFCs combined are estimated to cause significantly less radiative forcing today at 0.02 W m-2. While aviation contrails and cirrus are potentially the biggest cause of aviation-induced warming so far, HFCs and CO2 can stick around in the atmosphere for centuries continuing to warm. Comparing things that cause short-term warming (contrails) vs long-term warming (CO2) depends on which time frame you care more about…the next few years or the next few centuries. Tortoise and the hare. Both warming are our planet but at different rates and for different amounts of time.

Footnote 6: To understand the extremely slow ramp up and low-ambition of aviation offsets under CORSIA, take a look at the following chart from ICAO's Environmental Report 2016. It shows the international aviation industry's projected CO2 emissions through 2050 under their most optimistic scenarios for technology and operations improvements. I added the red colour to highlight the total CO2 emissions area. In addition, I've added vertical stripes to the portion of their CO2 they plan to offset via CORSIA. Notice: