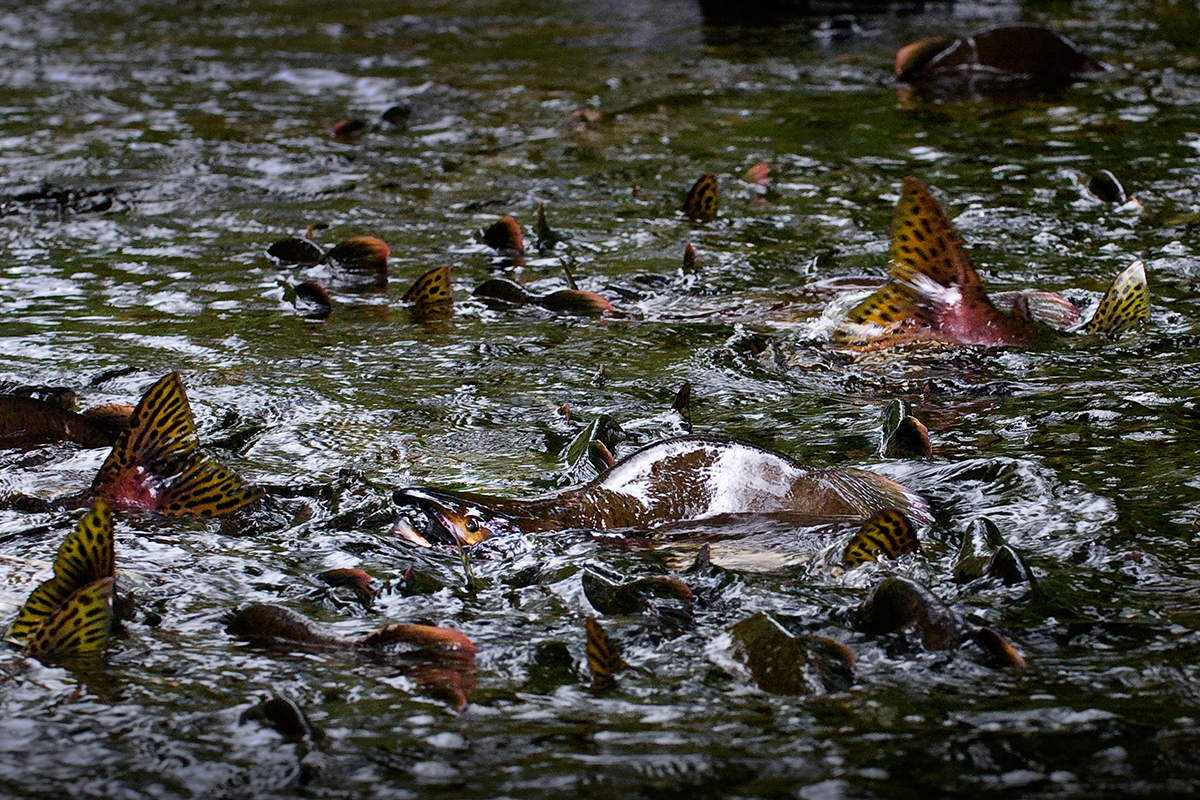 Pacific salmon are right in harm's way if the recently-approved Pacific North West LNG project is constructed, according to a new study. File photo by Andrew S. Wright.
Previous story
Next story

The Trudeau government approved a major fossil fuel project expected to cause "significant" damage to west coast ecosystems based on misleading and inaccurate evidence submitted on behalf of a Malaysian oil giant, according to peer-reviewed scientific research published this week.

The new research found that consultants working for Petronas — the company behind the controversial $36-billion Pacific NorthWest Liquified Natural Gas project (PNW LNG) — gave the government some flimsy evidence that neglected to mention how its proposal would harm vulnerable Pacific salmon.

Prime Minister Justin Trudeau's cabinet approved PNW LNG in September on the premise that the "significant adverse environmental effects" it would likely cause are "justified in the circumstances." The new research casts doubt on whether the Trudeau government is keeping an election campaign promise from 2015 to make decisions based on evidence.

If constructed, the project would generate roughly $2.5 billion in tax revenue for governments and 4,500 jobs during peak construction. Evidence submitted in the application claims Flora Bank, a sensitive and ancient ecosystem near the marine terminal site, is a temporary migration stop — not a critical rearing habitat — for juvenile salmon in the region.

But the new research by Simon Fraser University, Lax Kw’alaams Fisheries, and the Skeena Fisheries Commission, disproves those claims. It found that coho, chinook, chum, pink, and sockeye salmon of all ages reside in Flora Bank for weeks and in some cases, a month.

“The proponent said they’re swimming through, but they didn’t really have any data to back up that claim," said co-author Jonathan Moore, associate professor of aquatic ecology and conservation at SFU. "This is just one part of understanding the potential risks to salmon. What this specific chunk of science demonstrates is that the statements made in the environmental assessment were scientifically inaccurate.”

In a May 2015 report by its consultant, Stantec, PNW LNG claimed that previous studies of Flora Bank describing it as "important to the production and continued viability of Skeena River salmon" are "based on little or no evidence," as demonstrated by its observations of fish swimming through as part of their migration. Moore and his research team however, spent three to four months on location during migration season, documenting salmon behaviour.

"We collected salmon and looked at their chemical signatures, the isotopes in their tissues," he explained. "We can use those as clocks.”

They found the salmon lived in the estuary as a waiting ground, feeding and growing before returning to their migration. If any harm were to arrive to Flora Bank as a result of PNW LNG's terminal, trestle or bridge construction, the salmon would be seriously impacted.

Stantec redirected media requests for more information to PNW LNG, and PNW LNG did not respond to requests for comment in time for publication of this story.

Serious harm to salmon if project goes ahead

"I don’t know what’s going to happen to salmon if this project goes ahead," Moore told National Observer. "The Skeena Watershed has hundreds of locally-adapted populations in an area that’s as big as Switzerland that includes 11 different First Nations.

"The risks are posed to the whole watershed because we know that salmon swim through there, so the exposure is going to be high, and we also know from past work that salmon populations are sensitive to development."

Moore also said the study was completed months ago, and that the Skeena Fisheries Commission sent a manuscript to the Canadian Environmental Assessment Agency in March for consideration as part of its comments during the federal review of PNW LNG.

“The government approved it and said economic benefits outweighed the environmental risks, but the risks that they acknowledged were actually to greenhouse gases and porpoises," said Moore. “What this study shows is one part of that scientific foundation was shaky... I’m hopeful that the Skeena and Pacific NorthWest example really highlights how we can do better."

The agency did not immediately respond to a request for an interview with one of its scientists to discuss Moore's research, but provided an email statement to National Observer that appears to dispute Moore's claims. It said the federal decision to approve the proposal was based on sound science and careful consideration of the pros and cons, and recognized the importance of Flora Bank to young salmon.

Christian Vezeau, CEAA manager of communications operations, explained that the southwest tower and anchor block of the suspension bridge would not be located in the sensitive estuary. Federal conditions placed on the project also require the proponent to carry out follow-up monitoring to confirm that the marine terminal does not result in adverse environmental effects on the health of eelgrass beds on Flora Bank and the use of Flora Bank by marine species.

"Extensive modelling work conducted during the environmental assessment showed that the Project will not result in significant adverse effects to Flora Bank, including eelgrass beds," said Vezeau. "In cases where further investigation was needed, we went back to the proponent to obtain additional information and scientific data to study the impacts to marine mammals, fish and fish habitat.

"The Government of Canada stands behind its decision on the Pacific NorthWest LNG project. The Canadian Environmental Assessment Agency (the Agency) conducted a thorough science-based review, taking into account the views of scientific experts."

If constructed, PNW LNG is set to become one of the largest single emitters of heat-trapping carbon emissions in Canada. It currently faces three lawsuits, one from the Gitwilgyoots Tribe, one from the Gitanyow, and one from the SkeenaWild Conservation Trust, all three of which oppose the project due to lack of consultation, expected damage to valuable cultural and economic resources, and what they allege is poor science on the impacts it would have on fragile ecosystems in the area.

Some economists have suggested that the project isn't likely to proceed because of low global commodity prices which would make it hard for Petronas to make a profit.

Salmon aside, this gas supply

Salmon aside, this gas supply would be sourced by fracking which is causing serious quake and tremor issues. The fracking in northern BC was given a temporary Stop Order earlier this year because of the seismic activity caused by fracturing the earths fragile crust.

Ref: Known risk of earthquakes caused by oil and gas development, BC ...
www.ernstversusencana.ca/known-risk-of-earthquakes-caused-by-oil-and-gas......
Aug 16, 2016 - BC Hydro officials worry about risks of earthquakes triggered by fracking, ... fracking-created earthquakes a danger to northern dams by Gordon ...

Another issue is the TCP, Trans Canada Pipeline through Northern Ontario built in 1957 was paid for by a Crown Corporation then leased to TCP. We have countless towns and villages adjacent to this pipeline without natural gas service. Some communities have a compressor station but no local natural gas service. I question whether Farm Taps were ever provided in Ontario as they are common in the western provinces and the United States.

Ref: https://en.wikipedia.org/wiki/TransCanada_pipeline
Politics[edit]
Main article: Pipeline Debate
The 1,090-kilometre section crossing the Canadian Shield was the most difficult leg of the pipeline. Believing construction costs could make the line uneconomic, private sector sponsors refused to finance this portion of the line. Since the federal government wanted the line laid for nationalistic reasons, the reigning Liberals put a bill before Parliament to create a crown corporation to build and own the Canadian Shield portion of the line, leasing it back to TCPL.

Just this past week the Ontario Federation of Agriculture called on the Ontario government pleading that affordable energy is a serious issue in Ontario. Rural Ontario is the hardest hit by energy inflation with most businesses, residents and farms relying on electricity, propane or heating oil to support their way of life.

visitontarioruralgrowth.ca for more information. It is time for TCP to pay forward for the prosperity it has achieved with a network of pipelines across North America, even into Mexico. I am against the OFA proposal that the province should make a public investment into providing rural access into an expanded infrastructure.

Our Liberal government has to nix the Petronas, a Malaysian government, crown corporation LNG proposal. They have a responsibility to Canadians first, not the Investment Market and foreign countries.

I wonder when healthy

I wonder when healthy ecosystems and salmon stocks are going to be assessed a value that is real and tangible. I really had hoped that the current Trudeau government would stand up and defend the environment as they campaigned on. I was at COP 21 and met Ms McKenna. Shook her hand and looked her in the eye as she accepted congratulation after congratulation. Seems like a bit of a fraud now. You can't get low emissions numbers by approving these projects, and guess what? Alberta will NEVER vote liberal no matter how much you bend over for them.

This is not the first time

This is not the first time Stantec has made scientifically inaccurate statements. Their evaluation (for Kinder Morgan's Trans Mt proposal) of the effect of shipping noise from Aframax-class oil tankers on Pacific herring was based on a paper I wrote with a colleague (Schwarz and Greer 1984: http://www.nrcresearchpress.com/doi/pdf/10.1139/f84-140) in which we examined responses of Pacific herring to field-recorded sounds of the fishing fleet. The largest vessels we used were 15, 18 and 20 m long, respectively and the sounds of each were tested one at a time. on several groups of herring. The herring avoided sounds from these ships significantly more often than those from smaller vessels. Stantec did not mention the great differences between a) sounds from each type of vessel in the fishing fleet, none greater than 20 m length, played back once to each of several groups of herring, and b) sounds from several 245-m Aframax tankers, ongoing because of continuous activity in waters thst include herring migration corridors. In other words, Stantec and Kinder Morgan minimized the possible consequences of shipping noise on a large scale. As Pacific herring are central to the BC coastal marine food web, and as they support important aboriginal and commercial fisheries, they deserve more careful attention than they have received. Consultants should focus on accurate and objective reporting rather than shepherding a company's proposal as expeditiously as possible.

Supra Skytop Goedkoop
If you have apnea and are not able to crack the habit of smoking of resting lying on your back, try slumbering within a t-shirt with two tennis games balls sewn to the rear. Causeing this to be sleep at night shirt is a simple venture to perform in your own home, and it will assist to break you of getting to sleep face up. Whenever you attempt to roll around on your back inside your sleep at night, the tennis games balls will point out to anyone to roll back onto your aspect.

If you are traveling international, deliver post cards out of your home condition along with you. Provide them with to people which you fulfill in your journey. These are wonderful chat beginners, additionally they offer you a method to stay connected with new close friends. Just take note of your email address and name around the again, and it will be possible to communicate with them yet again.