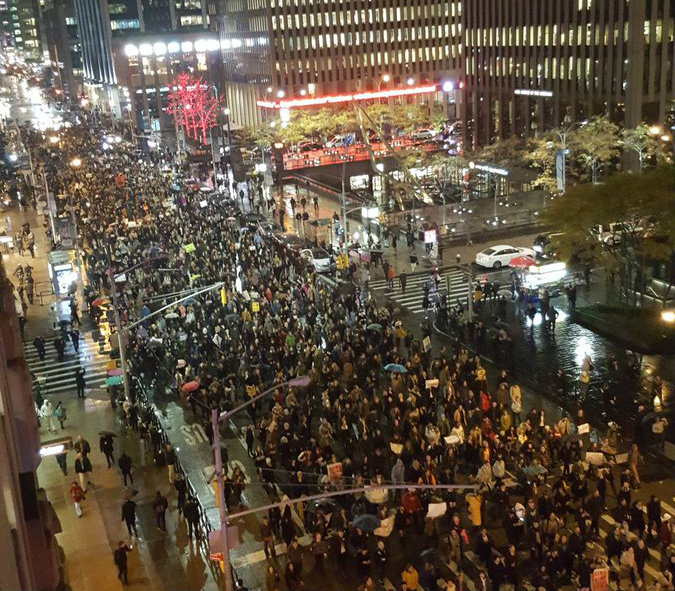 America, you have been plunged into crisis, and so has the entire world. Do not normalize this outrage by parsing voter data and internecine partisan recriminations. Unite, resist, stand against it, and defend your precious democracy.

Forget that Trump's a lying misogynist bigot elected on a racist platform by whites. There’s no law against that and no political power in it for you.

Join the peaceful protesters already in streets now, and stay there until an independent prosecutor is appointed to criminally investigate Donald Trump and his entire campaign for conspiracy.

Overwhelmingly and increasingly, there are reasonable and probable grounds to believe that the Trump campaign may have colluded, directly or indirectly, with foreign powers, hostile interests, and potentially even elements within the FBI, to subvert the democratic process and American Constitution.

As a direct result of voter manipulation and suppression, the second place candidate is about to seize control of the executive, judicial, military and law enforcement in the most powerful nation on earth, against the will of the majority of the people.

This is a global crisis, growing ever louder even as Putin sabre-rattles in Ukraine and our NATO partners in the Baltics are close to melting down. Serious and respected international figures such as journalist Anne Applebaum of the Washington Post now warn that NATO itself, the most stabilizing military alliance in history, may collapse.

General Michael Hayden, the former director of both the NSA and CIA, called Trump a clear and present danger to American and global security. He co-signed a letter to that effect with 49 other senior Republican national security officials, including former Homeland Security secretaries Michael Chertoff and Tom Ridge.

That was in August, before FBI director James Comey dropped his own bombshell letter, which led to disclosure of yet another totally bogus criminal investigation of Hillary Clinton. In the middle of early voting.

Even vehement Trump supporter and former Congressman Joe Walsh figured that went way too far, tweeting that 20 million people had early voted after Comey issued his first letter, “thinking the FBI had something big on Hillary.”

This is light years from Bush v. Gore 2000. Time is of the essence and there is not a moment to spare, lest media and shifting power alignments turn this into just another election fracas.

Americans must act and assert the irresistible and awesome power of the people in streets demanding justice. No functioning democracy can withstand it.

Elder statesmen and women and national security professionals must publicly step up and call for a full independent investigation.

Women and minority leaders must answer the call. So must the press.

If you’re a Bernie supporter waiting for your revolution, if you are a feminist, if you are a minority, if you’re a journalist concerned about freedom of the press, if you’re a conservative who loves America and cares about saving your democracy and the rule of law, go to the streets.

The hour is upon you.

Opinion: "I just broke down"

It does indeed seem that the

It does indeed seem that the only truth Donald Trump told during his campaign was that the election was rigged. It clearly appears to have been rigged by forces aligned with his campaign, including the FBI, and perhaps Russian agents, as Mr Walsh has clearly pointed out. Clearly aided by voter suppression strategies, predominantly targeting those more likely to vote Democrat.

Surprising that the Comey malfeasance did not result in a decision to start the balloting over, or to extend the voting period. Of course, that would have cost big money. Much better to allow the election to be stolen again by a Republican male candidate, than to pause and correct a catastrophic injustice. Kudos to Mr Walsh for calling this out. Means nothing though, if he and his fellow Republicans shrug and carry on. We've already seen a pretty clear demonstration that Republicans stand for nothing other than for getting elected, by whatever means possible.