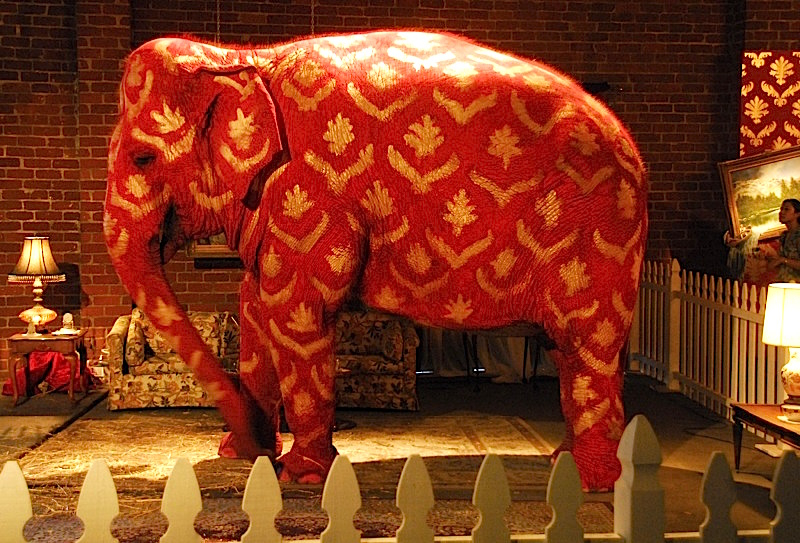 Banksy’s exhibit "The Elephant in the Room" for his 2006 show Barely Legal. File photo taken on September 16, 2006 by Flickr user Bit Boy
Previous story
Next story

In an unexpected move early in October, Prime Minister Justin Trudeau stood in the House of Commons to announce the federal government would unilaterally impose a carbon price in those provinces without such a system in place, starting in 2018. Other than the usual naysayers and proponents of doomsday scenarios (including Saskatchewan Premier Brad Wall), a national carbon price was long awaited in Canada and welcomed by businesses, private sector investors, economists and environmental groups across the country.

A carbon price is critical to providing a price signal to private capital investors and industry that it is worth investing in reducing their GHG emissions in a carbon constrained economy. But are we really sending the right price signal in Canada?

Let’s talk about the elephant in the room.

Federal and provincial governments continue to provide subsidies for the exploration and production of oil and gas in Canada in the form of generous preferential tax deductions and other fiscal measures. The foregone tax revenues from these measures are estimated at $3.3 billion. So how does this square with a carbon price of $10 per tonne or $30 per tonne of carbon?

Climate Action Network, Environmental Defence, Équiterre and Oil Change International released today a new study showing that these subsidies amounts to paying polluters $19/tonne to pollute, when taking into account the proposed carbon pricing mechanism. These subsidies drastically undercut the goal of the pan-Canadian carbon price that Prime Minister Justin Trudeau will introduce in 2018. Unless these subsidies are eliminated, between now and 2020 more money will flow from government to oil and gas companies in Canada than money collected by government from a carbon price.

Federal subsidies for the production of fossil fuels include the accelerated capital cost allowance available for Liquefied Natural Gas facilities that was originally introduced by the Harper government to pave the way for LNG terminals. This measure was maintained in Budget 2016 by the Trudeau government, no doubt a factor in making Petronas’ investments in the LNG terminal in B.C. profitable. Other measures include a duty exemption for imports of mobile offshore drilling units, the Canadian Development Expense and the Canadian Exploration Expense Tax deductions. The latter is a pretty generous deal: companies can deduct 100 per cent of the costs incurred for geological, geophysical, and geothermal surveys and exploratory drilling against their corporate income tax. This significantly reduces the financial risks of exploratory drilling for additional oil and gas development.

Conversely, the Government of Canada has introduced accelerated capital cost deductions for a variety of equipment that generates energy by using renewable energy sources or fuels from waste, or conserves energy by using fuel more efficiently. Budget 2016 extended these measure to include energy storage and electric vehicles charging stations. The Government of Canada also announced major investments to promote clean technologies including through Mission Innovation, where Canada seeks to double clean energy investment to $775 million by 2020.

However, these investments must be supported by coherent fiscal policies in order to make the Canadian clean energy sector attractive to domestic and foreign investors, and maximize the return on federal and provincial governments’ support for the clean energy sector. As such, remaining federal and provincial subsidies to the production of oil and gas must be phased out.

We know that any GHG emissions reductions achieved through those increased federal and provincial investments in clean energy risks being dwarfed by continued emissions growth from oil and gas development. There are oil and gas and liquefied natural gas projects in the application stage in Canada, and some start-up dates for these projects extend out to 2030 and beyond. The current trend of growth in GHG emissions in the oil and gas industry will continue if facilitated by governments’ support for continued exploration and development.

The Government of Canada has long-standing commitments to phasing out production subsidies to the fossil fuel industry, starting with the commitment in the G20 Leaders’ Statement in 2009. Prime Minister Trudeau reiterated this commitment to fossil fuel subsidy reform again at the recent G7 meeting in Japan. At the North American Leaders’ Summit in June 2016, Canada, along with Mexico and the United States, again committed to eliminating fossil fuel subsidies.

In addition, the Minister of Finance and the Minister of Environment and Climate Change were both mandated to work together to fulfill the G-20 commitment to phasing-out fossil fuel subsidies in their Mandate Letters. So the intentions are clear, now it’s time for action.

Transparency and predictability are key in this subsidy reform. The Government of Canada must release a comprehensive list of current accelerated capital cost allowances (ACCA) and other tax preferences available to the oil and gas sector in Canada, including what they represent to Canadian tax payers in foregone tax revenues. Minister Morneau must begin eliminating in Budget 2017 production subsidies starting with the Canadian exploration expenses deduction and announce a schedule for phasing out all other remaining federal production subsidies by 2020. Provincial governments must follow suit in their provincial budgets.

Coherent fiscal policies are necessary to address the elephant in the room and send a clear price signal to carbon polluters in Canada.

Annie Bérubé is the Director of Government Relations for Équiterre in Ottawa.