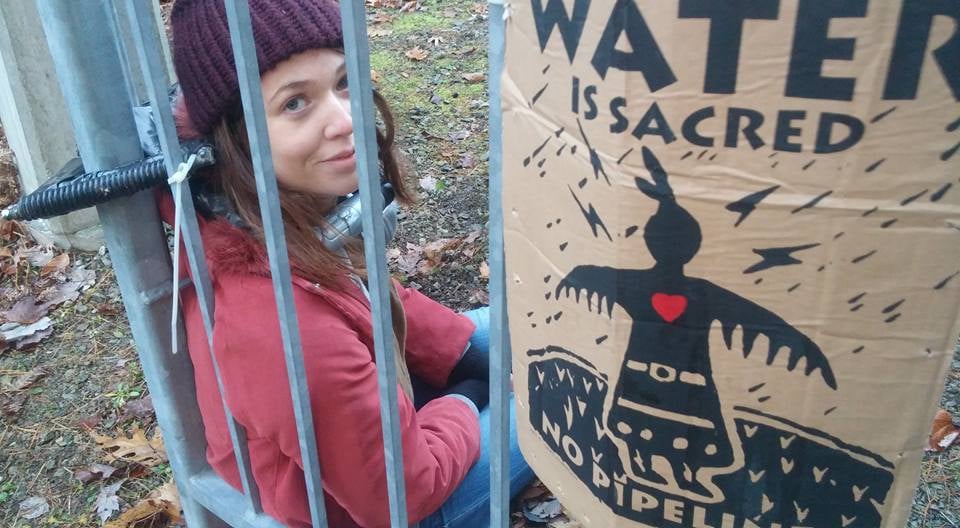 Élise Vaillancourt, 25, is one of three Montreal-area women who chained themselves to the Trans-Northern pipeline in Oka, Montreal on Nov. 18, 2016. Photo by Marie-Josée Béliveau.
Previous story
Next story

Three women chained themselves to an aging and leaky petroleum pipeline in a Quebec provincial park Friday morning near Montreal, urging Canada's federal regulator to protect public safety and shut it down.

The Trans-Northern pipeline has a history of safety incidents that recently prompted two members of Canada's National Energy Board (NEB) to call for an immediate shut down. But the majority of members on the federal regulator have opted to keep the major line running at reduced pressure, while the company investigates its safety issues. Trans-Northern ships jet fuel to major Canadian airports in Montreal and Toronto as well as other refined petroleum products.

The pipeline company told Montreal's La Presse Friday morning that it temporarily shut down the pipeline after learning about the protest, staged at a pumping station.

Trans-Northern sent out a second statement later in the day, saying that the protesters left the area at around 4:30 p.m. ET and that it would restart the pipeline after inspecting the area and ensuring that there was no damage.

The three Montreal-area women said they were taking matters into their own hands with direct action to protect the public from the risk of a spill that could contaminate drinking water for the entire region, the second-most populated metropolitan region in the country. They also said they took care not to tamper with any of the equipment to ensure that they weren't causing any new safety problem.

"We feel very concerned about the pipeline, because if ever there was a spill it would affect water of three million people," said Jeanne Beauchamp, 25, one of the three women, along with Élise Vaillancourt, 25, and Jessica Lambert-Massicotte, 22.

They said that a courteous police officer came twice in the morning to ask them how long they planned to stay, but then left. They were also visited by a provincial parks official who collected entry fees for the area which is located in Oka National Park, administered by the Quebec government.

The latest protest is part of a wave of direct action against fossil fuel companies, inspired by the recent standoff by the Standing Rock Sioux tribe in North Dakota and its supporters opposed to the Dakota Access Pipeline. Beauchamp said that they are acting in solidarity with the people of Standing Rock.

The NEB and Trans-Northern, a company that is jointly owned by three major Canadian oil giants — Suncor, Imperial Oil and Shell Canada — did not immediately respond to requests for comment on Friday morning.

Trans-Northern told National Observer last month that its "highest priority" is to operate the pipeline in a safe, reliable and environmentally responsible manner to protect the public, the environment and the pipeline. It also said it was respecting a safety order recently issued by the Board to resolve concerns.

"We are working with the National Energy Board to ensure we meet all conditions and regulatory requirements of the Amending Safety Order," spokeswoman Gail Sharko said in an email to National Observer on Oct. 27. "The pressure restrictions identified by the NEB have been implemented and an independent third-party is tracking and reporting on our process. Trans-Northern will continue to be vigilant in its monitoring and maintenance activities, including operating below approved pressure ranges until we are confident the pipeline can return to full capacity."

Landowners who live along the pipeline route in Ontario and Quebec have slammed the NEB for failing to crack down on the safety issues plaguing the pipeline and its history of leaks.

“I’m not really sure why they’re reluctant to shut this rotten pipeline down,” Bev Dahmer, a landowner who lives in Grafton, Ont. told National Observer on Oct. 24. “I believe that Trans-Northern is doing everything in their power to shirk their responsibility.”

Editor's Note: This story was updated at 4 p.m. ET on Sunday with a new statement from Trans-Northern Pipelines Inc.

NEB - a lame duck captured regulator. SNAFU
Trans-Northern - another irresponsible pipeline company getting a free pass from the NEB.
Those living along the Trans-Northern pipeline route: sitting ducks. SOL

Mike De Souza, please post the picture of the dented pipe in the stream bed you had in an earlier article about this same pipeline. Does not the TSB, Transportation and Safety Board have responsibility in this "gross negligence". How old is this pipeline? These aged pipelines after being in service likely cannot be Hydrostatic Tested because the fill water is taken from a nearby lake or river. A line carrying oil products would contaminate the water versus testing a natural gas line.

Please open this link of the TSB Report on the Beardmore Pipeline explosion. If this line was carrying oils as TCP, Trans Canada Pipelines has proposed con/nverting the 60 year old natural gas line with their Energy East proposal to carry oil to New Brunswick. Beardmore would have preceded the inferno of Lac Megantic with the oil running downhill into the town incinerating it. It took TCP 11 hours to completely shut the valve off.

Check out the pictures of the outside corrosion on this line. A mere 15 years after being put in service this line was rupturing from water testing in the early 70’s.

These old lines must be replaced and taken out of service being sent to the melting pots at our struggling Steel Mills. Lets make Canada Great Again. Algoma Steel in Sault Ste. Marie and Erie Steel at Nantikoke south of Hamilton are in Receivership protection now.

Oops, Mike the Related Article is below this one @ https://www.nationalobserver.com/2016/10/24/news/two-members-regulator-s...

This has the pictures of the dented pipe in a stream bed near Montreal on a pipeline that runs through Southern Ontario to Pearson Airport carrying Jet Fuel and onto Montreal's Airports. This is gross negligence.endangering public safety and the environment..