Photo of Rand Shukr and her mother by Andrew S. Wright

It's a rainy afternoon and I'm waiting with a photographer and a translator by the door of a low-rise, low-income housing complex in Surrey, B.C., home to many recent Iraqi and Syrian refugees.

We're waiting for Ahmed Shukr, a middle-aged refugee from the Syrian capital, Damascus.

He had previously gone to the local Refugee and Immigrant Welcome Centre in a state of despair. He explained that he had a developmentally disabled 11-year-old daughter at home, who couldn't walk or talk. His wife Amal Khassana was sick and needed open heart surgery but she's been putting off the operation to take care of their daughter, Rand. Ahmed was at wit's end.

Their case illustrates part of the challenge that Canada is facing as it welcomes thousands of refugees from Syria. It is government policy to help the most vulnerable people, but the federal government says it cannot yet provide any statistics about how much it will cost to help them.

Ahmed had invited me to meet his daughter, and see what the family was going through. But 15 minutes past our agreed meeting time, there's still no sign of him.

Suddenly, a flash of silver flies through the air. It's a set of keys to the building, which Ahmed has flung down from the porch.

The door opens onto a set of dark, carpeted stairs. They creak at every step. The air feels old and damp.

On the second floor, we open the door to the Shukr residence. Ahmed's wife, Amal Khassana, welcomes us with a bright smile and a warm greeting. "Sabaa al khair! (Good day!)” .

In Syria, the Shukrs were a well-off, white-collar family. Gold rings glitter on her fingers, a reminder of her former life. Ahmed was a real estate agent, Amal an engineer. She interrupted her career to care for their daughter. They're not used to feeling helpless as refugees in Canada.

Amal invites us inside her house, which is small and cozy but dimly lit. The living room is set up with Arabic-style cushions.

I catch a glimpse of brightly-coloured children's clothes on the brown sofa.

It's Rand. She lies quiet and immobile, dark eyes facing the ceiling. She's 11 and physically small even for a girl half her age. Her clothes overwhelm her thin frame.

"Rand, say hello to everyone," Amal says through the translator, propping her daughter's limp body up on her lap. She smooths Rand's shoulder-length hair and holds her hand. A joyful smile widens on Rand's face.

"She doesn't talk, but I think she feels everything that we are saying," Amal says softly.

It's clear that Rand won't have the same experience as other Syrian refugee children. They are going to school and rapidly picking up English but Rand's days are spent back and forth between hospitals and home.

The Shukrs' experience highlights a major challenge in dealing with the refugee crisis.

As part of its policy to bring refugees to Canada, the federal government called on the United Nations Refugee Agency to identify and recommend the most vulnerable refugees for resettlement. This included Syrian refugees with:

At the Thank You Canada event organized by Syrian refugees at Langley Community Services Society earlier this year, I met a number of families with severely disabled children. Some told me they were struggling with major mobility issues — one described being in a wheelchair in a second story building without elevators. I heard of volunteers helping Syrian refugees who have become mentally ill, or had severe health problems that made it virtually impossible for their close family members to pursue education and jobs, for fear of what might happen.

Immigration Refugees and Citizenship Canada (IRCC) explained by email that "Canada has a long and proud tradition of providing protection to those who need it the most by providing refuge to the world’s most vulnerable people."

But now that those vulnerable refugees are here, some are visibly struggling. So are their caregivers, who face loneliness, depression and burnout.

Approximately 13 per cent of Canadian adults live with some kind of disability, according to Statistics Canada. Asked if there were similar statistics for the Syrian refugees selected to come to Canada, IRCC spokesperson Sonia Lesage says 15 per cent of refugees (around 4,000 people) had a medical condition that has no impact on public health or safety.

This "medical condition" could mean almost anything, from high blood pressure to Down syndrome. The IRCC could not provide a further breakdown or an estimate of future costs of assistance for refugees with special needs.

"Every single day, it's appointments, and more doctor's appointments. I spend two hours on the bus one way to get to a specialist for Rand. And another appointment for my wife," Ahmed laments, holding his hands up to the sky in frustration.

"We're very isolated here," Amal says sadly. "We don't have many friends. Sometimes, we spend our whole day day inside the house."

The Shukrs aren't alone. In fact there are refugee families in even more challenging situations across the Lower Mainland.

Alia Hurkus, a widowed Syrian refugee in Surrey, is the sole caregiver for her three developmentally disabled adult daughters, one of whom is completely blind. Her difficulties are alleviated only by the fact that her eldest son, Ali, periodically drops by to help her look after his sisters. But Ali is worn out from having to look after his own four children, then going to help his mother.

The girls, however, are upbeat. Hiba Hurkus, a talkative young woman in a pink shirt, beamed as she spoke about how caring doctors were in Canada.

"When I almost fainted at the hospital here, the doctors ran to catch me and ask if I was okay. They're so nice. Where I was before, the doctors would have told me to just go away," she recounted.

As we talk, the Shukrs express hope of bringing their eldest daughter, Alaa, from Jordan to help them with Rand. They say they moved to Canada with the expectation that Alaa would join them quickly.

"Alaa knows everything about Rand and how to care for her," Amal says. "She can help us."

I've brought along an application form to request nurses for home visits, and ask the Shukrs if they know about the program. They glance at the form but it turns out they've already applied, with little success. What's more, they're uncertain whether a stranger could provide the care and commitment for Rand that their older daughter could.

"We were told a nurse could come and help Rand for two to three hours a week. But two hours is nothing! It takes Rand that long just to have a meal," Ahmed says.

The Hurkus family, too, said they wanted to have their daughter join them in Canada, to help share caregiving duties. 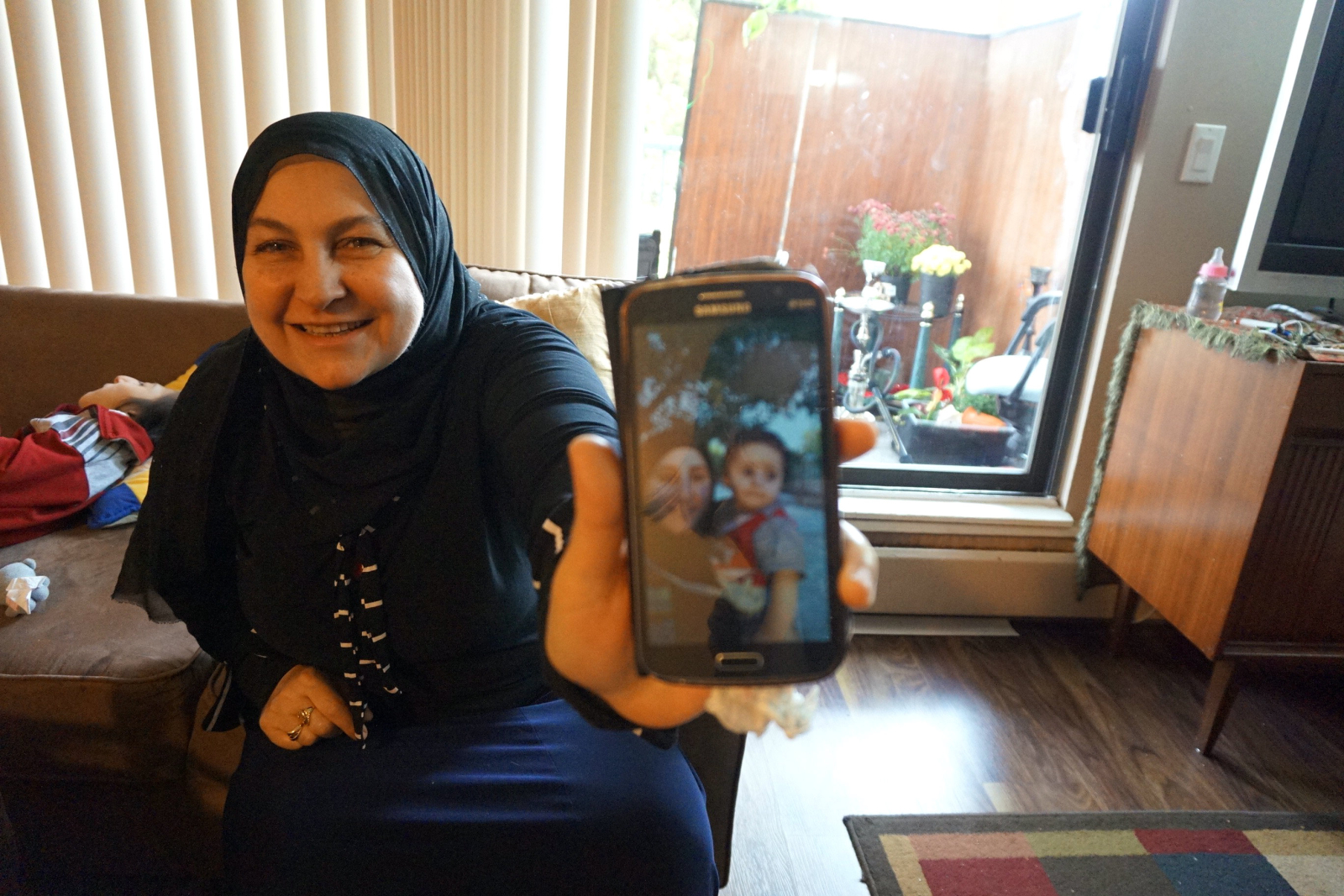 Amal holding photo of Alaa on her phone.

The Shukrs are starting to feel hopeless about their future. They're now mulling far-fetched solutions to reunite with Alaa, like traveling to Sudan, which allows refugees to come and stay without a visa. But this solution feels unrealistic, given how difficult it would be for the couple to travel through airports with Rand in a wheeled carriage.

The couple does have a 20-year-old son, who goes to Columbia College in Vancouver and is studying English. They show photos of him posing with a car, and selfies from his phone. But they brush off suggestions that he stay out of class to care for Rand, saying he has his own life.

"We just don't know what to do anymore," Ahmed says. "We traveled to Canada only because the government told us we could be with Alaa in a month. But now it's been nine months already, and no news about when she might come. I don't see a way forward for our future."