PHOTOS: Victoria takes to the streets against Trudeau pipeline approvals 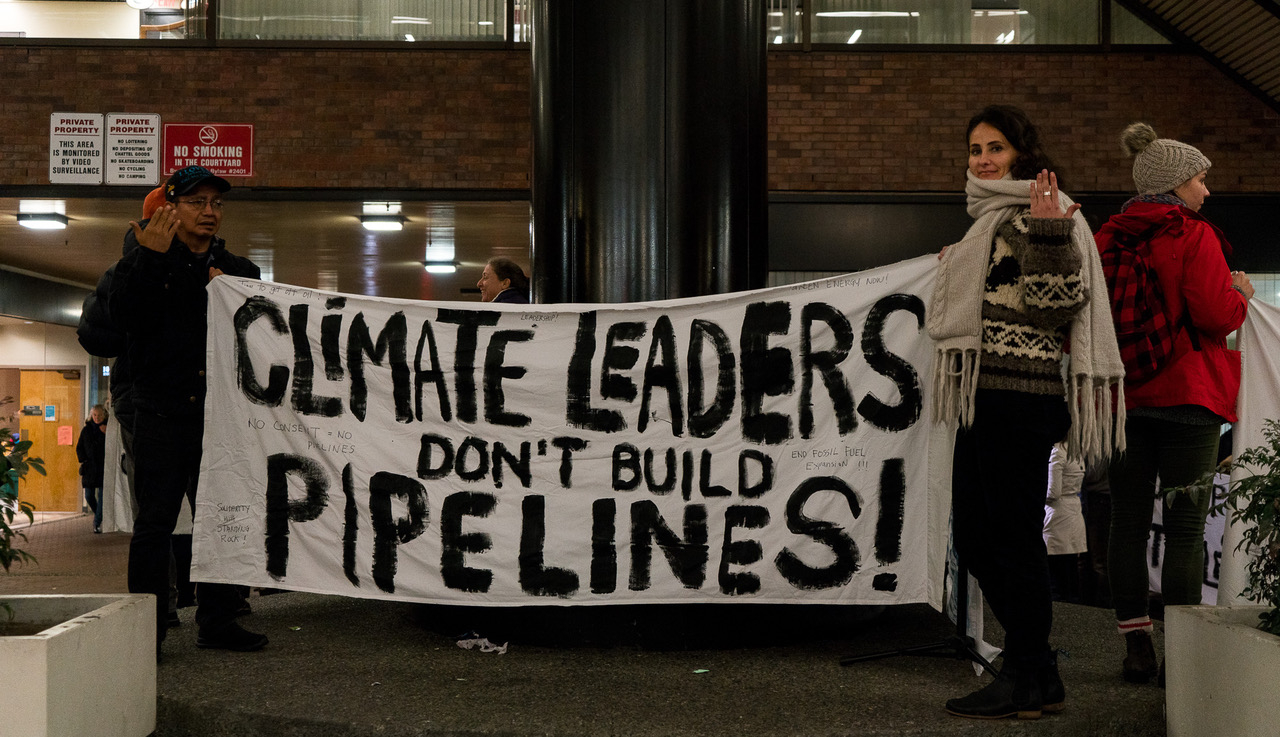 Rally organizers in Victoria hold up a banner on Dec. 1 with a message for Prime Minster Justin Trudeau, at the Victoria Public Library, on Thursday night. Photo by Naomi Devine
Previous story
Next story

Approximately 1000 protestors marched peacefully in the streets in Victoria on Thursday night with a message for Prime Minister Justin Trudeau.

The demonstrators say they are not giving their consent for Texas-based energy company Kinder Morgan, to build its Trans Mountain pipeline expansion project.

The rally was originally organized to show solidarity for the Standing Rock Sioux tribe in their current fight against the Dakota Access pipeline (DAPL), and was expanded after Prime Minister Justin Trudeau granted Kinder Morgan approval to build its expanded pipeline.

Kinder Morgan's project would triple the existing capacity on its Trans Mountain line, bringing 890,000 barrels of oil per day from Alberta to Burnaby.

The rally took place over 2 hours. It began at the Victoria Public Library before winding its way through downtown. It stopped for more speakers at the corner of Douglas and Fort Street, in front of the offices of several Canadian financial institutions, linked to funding the Dakota Access pipeline. It ended at the B.C. Legislature. The rally's Facebook page said it was organized by the Social Environmental Alliance, Indigenous Solidarity Working Group, Turning the Tide, Leap-Victoria, Victoria Council of Canadians, Greenpeace Victoria Volunteer Group and Divest Victoria. Speakers from Dogwood Initiative and Sierra Club BC were also featured.

Photos below by Naomi Devine.

North Dakota Access demonstrates what peaceful protest can do, we need to up the level against the KM to make it absolutely clear.

North Dakota Access demonstrates what peaceful protest can do, we need to up the level against the KM to make it absolutely clear.

If British Columbia had a

If British Columbia had a proportional voting system the likely seat count would be: Liberals = 40 ... NDP = 37 ... Greens = 8 and as the NDP nor the Greens support this pipeline and if they voted together to defeat it, this pipeline would never be built. Protests, arrests and court cases would not be necessary. Although, we'd still have to lobby the government to make sure they know that the citizens of BC want clean renewable energy instead of pipelines. Clean, renewable energy is the direction we must travel in order fight climate change and ensure a bright future for our children. It all starts with a change to our electoral system.