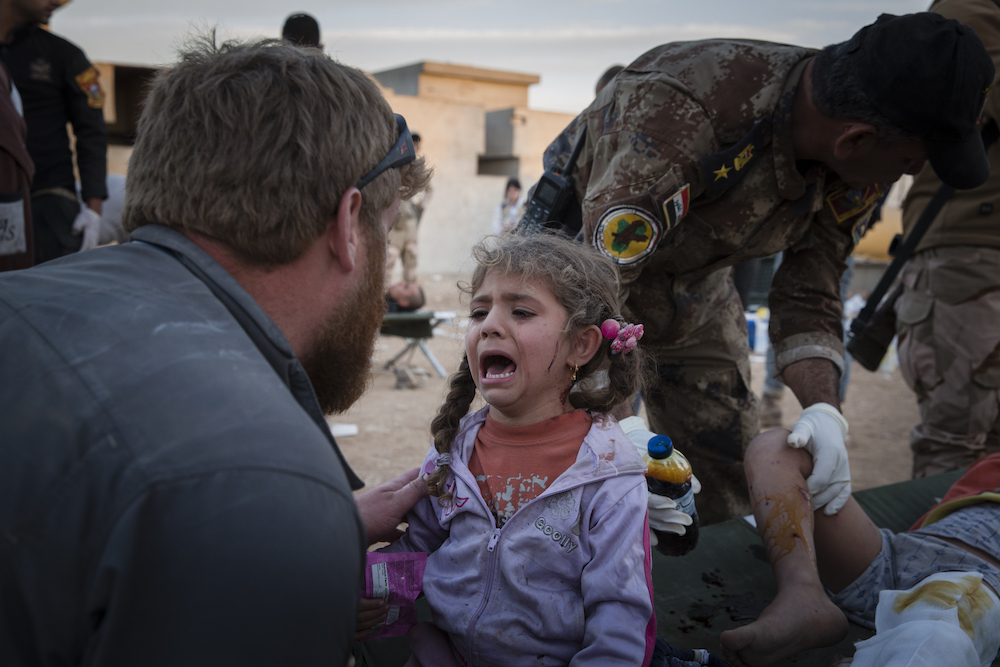 Young children are treated at a first-aid station in the Gogjali neighbourhood of Eastern Mosul after they were injured by a mortar round while trying to flee their homes. Photo by UNHCR/Ivor Prickett
Previous story
Next story

UNHCR, the United Nations Refugee Agency, is a lifeline for people displaced by violence, conflict and persecution—helping them survive, recover and build a better future. Donate today to help the people of Mosul.

Before they fled from their village just north of Mosul, Fatima’s family struggled to stay alive in their home. “I sat my mother on a rug because she couldn’t move,” says Fatima’s daughter and caregiver, 48-year old Fathiya. “As we heard shelling and the sounds of gunfire all around us, I pulled her from room to room to protect her from bullets that might come through the window.”

On October 17, U.S.-backed Iraqi government troops and Kurdish security forces began a massive offensive to drive Islamic State fighters from Mosul, the group’s last major stronghold in the country. The result is a major displacement of Iraqis fleeing the fighting, many of whom have been surviving under brutal militant rule for two years.

With six camps already built, the United Nations Refugee Agency (UNHCR) is planning for a total of 11 camps, with a capacity of 120,000 people. The Agency says that more land and further funding must be found to shelter and feed traumatized displaced residents.

Although she is happy to be safe in the camp, Fatima’s disability makes an already harsh and spare existence—living in a basic tent with communal washrooms—even more of a struggle. That struggle is heightened by the fact that it is now winter—tents are often coated with ice during the night.

“It is difficult to look after my mother here,” says Fathiya. “My sister and I have to carry her to the toilet and she hasn’t had a shower since we arrived.” The family had a wheelchair, but it broke down, and at $200 U.S., a new one is financially out of reach.

When the Qaymawa Camp first opened in October 2016, UNHCR identified more than 20 people with disabilities. More than 4,500 people now live there, with more arriving every day.

“UNHCR protection officers are currently making a map of the camp to identify those with special needs, so we, along with the Department of Health and other NGOs, can properly respond, including the distribution of wheelchairs,” says Djamal Zamoum, UNHCR Senior Emergency Field Co-ordinator in Iraq.

Fathiya believes that even small measures would help her mother, and other disabled people.

“It would really help if we had a mobile toilet for her, and if there was an empty tent with a bucket of water where my sister and I could wash her,” she says. “My mother misses the light. She asks me to take her out so she can see people and enjoy some fresh air. But it isn’t possible,” she adds.

UNHCR, the United Nations Refugee Agency, is a lifeline for people displaced by violence, conflict and persecution—helping them survive, recover and build a better future. Donate today to help the people of Mosul.