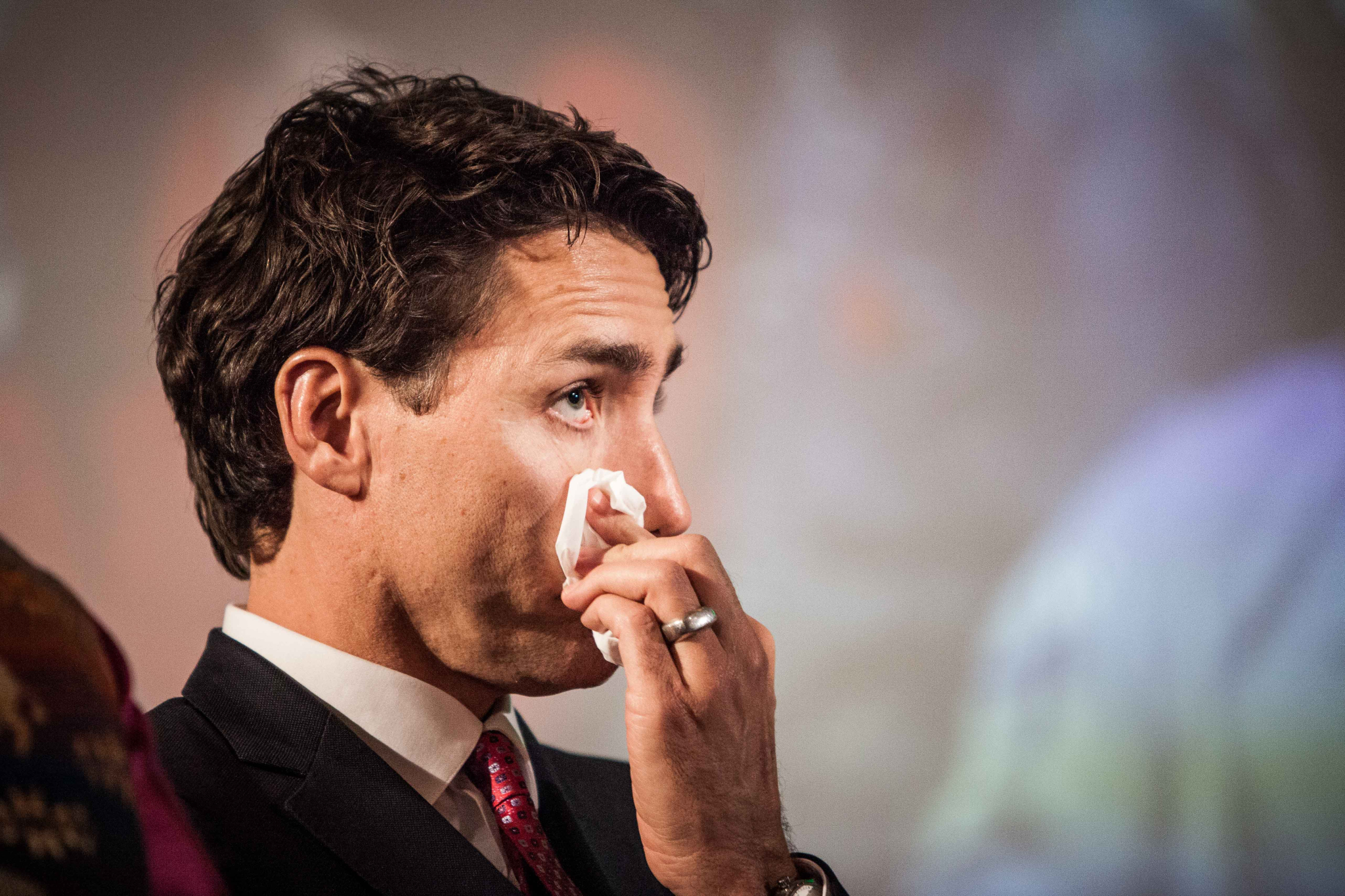 Prime Minister Justin Trudeau wipes away tears as the Tragically Hip's Gord Downie is honoured at the Special Chiefs Assembly in Gatineau, Que. on Dec. 6. Photo by Alex Tétreault.
Previous story
Next story

Trudeau made the comments during a special appearance at a gathering of chiefs from the Assembly of First Nations in Gatineau, Que. It comes less than a week after he made a series of controversial decisions on pipeline projects that have divided Canada.

Some of the First Nations supported Trudeau's decision last week to approve two major oil pipeline projects — Enbridge's Line 3 replacement project from Alberta to the U.S. Midwest, and Kinder Morgan's Trans Mountain expansion project from the Edmonton to the Vancouver area — with dozens of conditions. There have also been some divisions over his decision to reject Enbridge's Northern Gateway project, another proposed pipeline to the west coast.

Trudeau, who has attended the annual special assembly two years in a row, recognized that some of the First Nations were pleased, while others were disappointed.

"Reconciliation does not mean that we or even all members within this proud assembly will agree on everything," Trudeau said. "I know there are people in this room who deeply disagree with our position to move ahead with the Kinder Morgan pipeline. I know there are people here who agree with that decision... The test of our relationship is not whether we always agree. The test of our relationship is whether we can still move forward, together. And that means moving forward in respect."

After the 'dark years' there was hope, says Fineday

Speaking to reporters before Trudeau's speech, Cheyenne Fineday, 19, said that her people had hope last year when the federal Liberals formed a new government, ending nearly a decade of Conservative rule in Canada.

"We went through dark years in the Harper government and then during the Trudeau government in the beginning he promised sunny ways, he made good promises to First Nations people, to my people," she said on Tuesday in Gatineau, Que. "But has he followed through? Not really.”

Fineday, 19, is from Witchekan Lake about two hours north of Saskatoon, Sask., where a July oil spill on a pipeline operated by Husky Energy contaminated the source of drinking water for nearly 70,000 people.

Fineday, a youth member of the Assembly executive, said Trudeau's decision will have serious long-term consequences that will harm people.

"It’s our responsibility to protect our mother earth and our water and to make decisions that will protect our future generations and our young people," said Fineday.

"Short term, we can agree that pipelines may be a good thing because they do create jobs and money coming into communities. But long term, when that money runs out and our waters get contaminated, our young people are going to wonder why they don't have access to clean water, and we can say it’s because of these projects. So what’s more important: money or the lives of our young people or preserving our mother earth and our lands and our waters?"

Speaking at a news conference after Trudeau's speech, Perry Bellegarde, the national chief of the Assembly of First Nations, added that there is widespread debate about pipelines across Canadian society. But he echoed Trudeau's comments about promoting a respectful conversation between all sides.

"It (the pipeline debate) is dividing Canadians," Bellegarde told reporters at a news conference. "It’s divided the Liberal Party, It’s divided our council. It’s divided chiefs. I just want to sure that there’s a place for dialogue because we always seek a balance between the economy and the environment."

Trudeau and oil industry representatives have said that new pipeline projects are essential to create jobs in a sector that has been hammered by plummeting global commodity prices since 2014. The prime minister has also said he believes that revenues from new oil and gas development can help provide new government revenues to spend on a transition to cleaner forms of energy.

Fineday said she is against all new pipelines for oil and gas because she believes there are other ways to move forward in a positive way.

“One day he (the prime minister) is going to have grandchildren. He’s going to have great-grandchildren, and they’re going to wonder why they don't have access to clean water and we can say it’s because of the decisions he made in 2016," Fineday said. "Clean water is not just a necessity for First Nations people, but it’s a necessity for all people. We need it to survive. It’s a basic human right to have clean water.”

Serge Simon, the grand chief of the Mohawks of Kanesatake, a First Nation community northwest of Montreal, said there is a lot of technology available to replace fossil fuels, including wind, solar and hydrogen fuel technologies. But Simon, who opposes expansion of the oil and gas industry and new pipelines projects, believes there is a lack of political will to develop these alternatives at a rapid pace.

"So what the hell are we doing? (Must we continue developing fossil fuels) just because the industry says we can’t leave that oil in the ground? Yes you can," said Simon, who was also at the gathering. "All you have to do is just turn around and walk away."