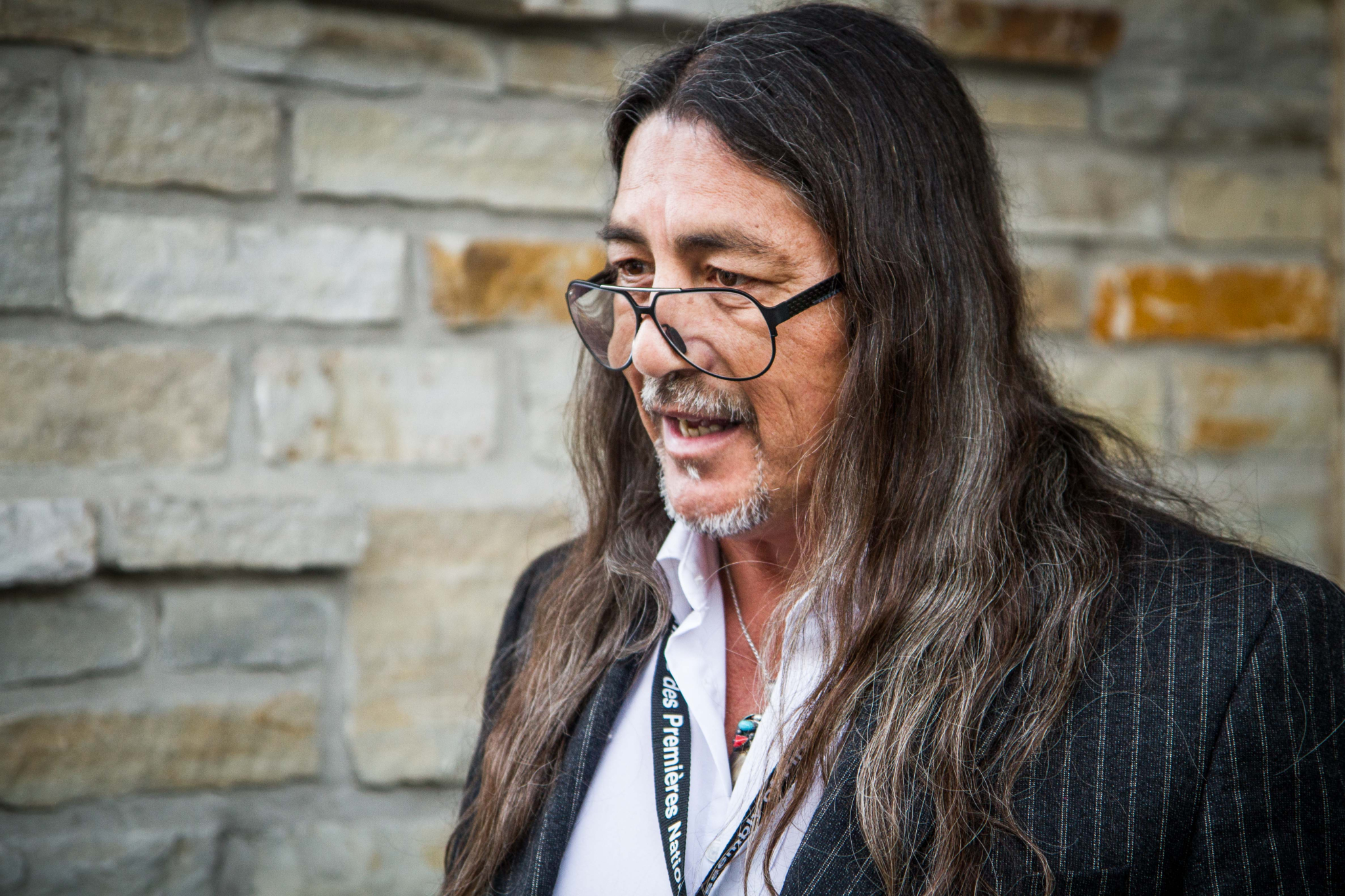 Grand Chief Serge Simon from the Mohawks of Kanesatake speaks to National Observer on Dec. 6, 2016 about the Oka crisis. Photo by Alex Tétreault
Previous story
Next story

Serge Simon remembers in vivid detail the Oka crisis that struck his First Nation 26 years ago. And he's relieved the federal government has apologized for raising the spectre of military standoffs against pipeline protestors.

Simon was 28 at the time of the 1990 crisis. His community of Kanesatake, northwest of Montreal, was trying to stop a golf course and real estate project endorsed by the neighbouring town of Oka, Que.

Simon remembers seeing a tactical squad from the provincial police force heading up a hill toward a barricade set up by the Mohawks.

“I thought to myself: 'My God, they’re going to kill everybody up there,'" Simon said.

Simon is now the grand chief of the Mohawks of Kanesatake and he says that some of these painful memories from the crisis that followed came flooding back because of comments made by Canada's Natural Resources Minister Jim Carr.

Last week, Carr suggested that the federal government was prepared to respond with military and police force if opponents broke the law to block oil pipeline projects in Western Canada.

Simon, a strong supporter of Canada taking aggressive action to fight climate change, said Carr's comments brought back the spectre of Oka. And he was planning to voice his displeasure by leading a delegation to walk out of a speech by Prime Minister Justin Trudeau at a special assembly of First Nations chiefs this week in Gatineau. The walkout was averted at the last minute when Carr personally called the Mohawk chief to apologize for opening the old wounds.

Speaking to National Observer outside the special assembly, Simon says he accepted the apology. But he hopes the government has learned an important lesson about the environmental and economic risks of approving major oil and gas industry projects that could harm both Canada as well as First Nations.

“I told him: ‘I hope you understand, Mr. Minister, that when you use those kind of (words), especially with me, I’m from Oka, and I understand all too well what it means to be surrounded by the army. So you’ll understand sir, that I have my reservations on those choices of words,'” Simon said.

Carr told reporters in Ottawa that he regretted his remarks and that if they conjured up bad images or memories for any community, “then I’m sorry.”

Trudeau also said it was important for the government to show respect for First Nations and apologize when it made mistakes.

"I'm proud of our minister of natural resources who apologized for his unfortunate comment,” Trudeau told the gathering in Gatineau, drawing some applause from the crowd.

Carr was apparently addressing the prospect of civil disobedience in Canada like the Standing Rock pipeline protests south of the border, when he told an audience of business leaders in Edmonton: “If people choose for their own reasons not to be peaceful, then the government of Canada, through its defence forces, through its police forces, will ensure that people will be kept safe. If people determine for their own reasons that that's not the path they want to follow, then we live under the rule of law.”

But Carr backtracked on Tuesday, telling reporters: "While I have you all here so well gathered, I didn't choose my words carefully last week, and I regret that.

“The point I wanted to make was that one of those characteristics of Canada that makes us such a special country is that we have not only tolerance for dissent but we embrace dissent because it is an essential characteristic of who we are to be Canadian.

“And I also wanted to make the point that civil disobedience and peaceful protest is very much a part of our history and I should have left it at that.

“And I regret if people were concerned. I wanted not at all for images to be conjured up. I just wanted to make what I thought was the simple point and the important point that peaceful protest is very much who we are as Canadians and also as Canadians, we respect the rule of law. And that's probably a better way of expressing it.”

In the United States, recent protests against construction of the Dakota Access pipeline have become an international symbol of public resistance to the oil and gas industry. At times, peaceful demonstrations have been met with violence from security forces, rallying additional supporters to the cause of indigenous people such as the Standing Rock Sioux Tribe, which fears the pipeline will compromise their land and water.

The clashes have inspired supporters in other regions to show solidarity with the people of Standing Rock by pressing their own governments to protect the land and culture of all Indigenous communities. They also served as a catalyst for the signing of a pan-continental treaty alliance against oilsands expansion.

Grand Chief Simon, one of the signatories to the anti-oilsands treaty, has also been one of the strongest opponents of another proposed oil pipeline, the 4,500 kilometre Energy East project by TransCanada Corp., that would ship up to 1.1 million barrels of oil per day through six Canadian provinces, including Quebec.

Simon said he doesn't want to see any protests turning into the crisis he and his community went through in 1990.

On the day the Oka Crisis started, on July 11 of that year, Simon said he remembers being approached by a reporter asking if he knew how to get to the barricades where the police squad was headed.

"I said: 'Yes I do,' and I knew the woods in that area," Simon continued. "So we took a shortcut through the woods, ran through the golf course. We got to the barricades and there was tear gas coming towards us and I saw friends of mine, band members that were running toward us, running away from the tear gas, rubbing their eyes and it wasn’t long after that we heard the first shots. We just heard ‘pop!’ ‘pop.’ And after that it just went nuts. So we hit the ground and when we got up, that was the beginning of the Oka crisis."

In the ensuing gunfire, Corporal Marcel Lemay from the Sûreté du Québec was killed, and the federal government called in the army, provoking a tense standoff that lasted 78 days.

“In this case, we’re in opposition with a particular (pipeline) project and we’re going to use every peaceful means at our disposal because I really don’t want to go through another Oka crisis," Simon said. "I don't think that’s the solution. We were lucky we (as a country) got away with it 26 years ago. The next time, we may not be so lucky on either side. Not just ours, either side. And as the grand chief, there’s no way I’m going to put my youth in harm's way over something like this. There are other ways of dealing with it and we will use those ways so that no one gets hurt.”

But Carr said the Canadian proposals are a different set of circumstances from the Dakota access pipeline and should each be examined on their own merits.

“I'm fully confident that Canadians will be peaceful in the way in which they express themselves on this and other decisions,” he said.

Simon said he also hopes the Canadian battles go smoothly, because he never wants to see another Oka crisis ever again.

"It was a 78-day nightmare, and it didn’t end with the lowering of the barricades," Simon said. "The social disintegration that followed afterwards of my community — socially, politically, economically — was a complete disaster. And we suffered from that, well over 12 to 15 years after the barricades came down.

This Chief reminds me of my

This Chief reminds me of my Dusty. (ex-hubby who passed away who was half Cree half Irish).