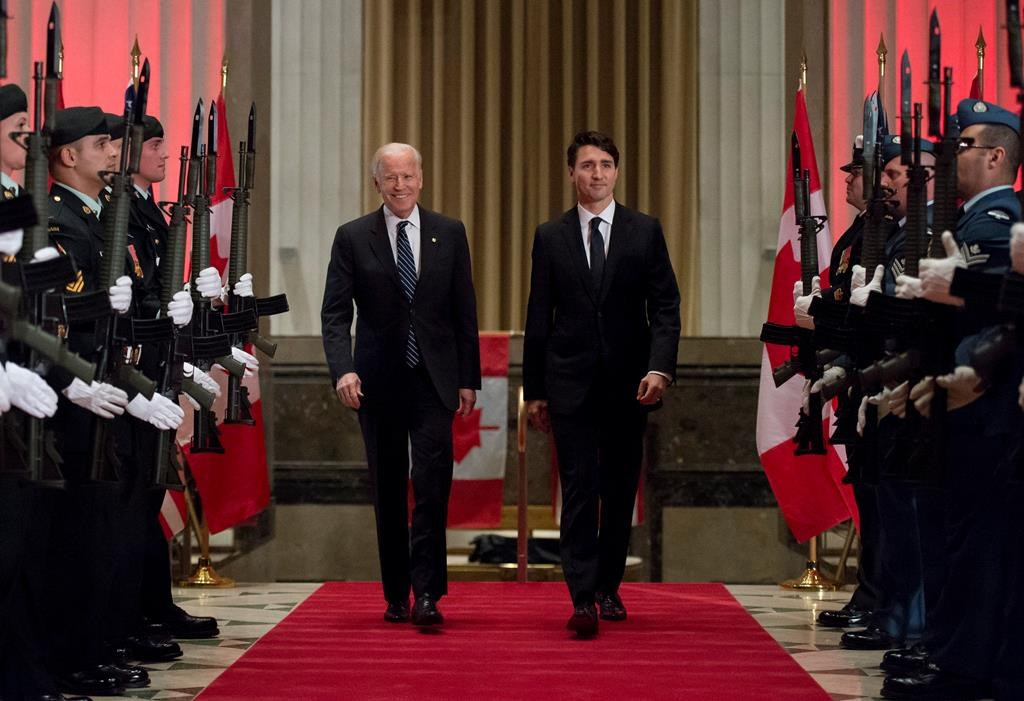 U.S. Vice-President Joe Biden called on Prime Minister Justin Trudeau to be a defender of the international "rules of the road" to help shepherd the world through a period of deep uncertainty.

Biden delivered that message in a stirring speech at a state dinner in his honour in Ottawa on Thursday night, in which he singled out the fight against climate change as the most important issue of this generation.

Biden didn't mention president-elect Donald Trump by name but he made veiled references to the uncertainty gripping Europe and the United States since Britain's decision to leave the European Union and the recent presidential election in his own country.

Biden said the world would make enormous progress — but only if leaders such Trudeau and German Chancellor Angela Merkel stepped up.

"The progress is going to be made but it's going to take men like you Mr. prime minister, who understand it has to fit within the context of a liberal economic order, a liberal international order, where there's basic rules of the road."

Biden praised Canada as an ally and a friend, one that the U.S. needs more than ever. He singled out the joint fight against Islamic militants in Syria and Iraq, bolstering Eastern European allies against Russia and combating climate change, "the most consequential issue of our generation."

Biden said that when he looks at the "ebb and flow" of the world, there are periods when genuine leaders are in short supply.

"I've never seen Europe engage in as much self-doubt as they are now," Biden said.

"There's a lot of soul searching going on in Europe and you saw some of it my country."

Biden delivered his message to a gala audience of former prime ministers, current provincial premiers and other dignitaries.

Biden said he would be discussing climate change when he attends Friday's meeting of provincial premiers and aboriginal leaders in Ottawa.

Earlier Thursday, Foreign Affairs Minister Stéphane Dion said Canada will push the incoming Trump administration to be an ally in the fight against climate change.

Dion told The Canadian Press that goal won't be undermined by hosting Biden.

"We will try to convince the Trump administration to go ahead in the fight against climate change and avoid greenhouse gas emissions."

Canada and the U.S. have been strong climate change allies in the last year, with Trudeau earning praise from Barack Obama for his role in helping negotiate the Paris accord to lower greenhouse gases last year.

Trump has said he would cancel the Paris accord, calling human-made climate change a hoax. Two days before his election victory last month, Trump tweeted that "global warming was created by and for the Chinese in order to make U.S. manufacturing non-competitive."

Trump has appointed Oklahoma attorney general Scott Pruitt — an opponent of Obama's climate change policies — to be the head of the Environmental Protection Agency. Pruitt has been known as a doubter of scientific evidence that humans are contributing to climate change.

"The EPA is an admirable institution, very effective, a source of inspiration for Canada," Dion said.

Dion made it clear that Canada will try to make a business case for the environment to engage the billionaire, deal-making businessman who will soon occupy the White House.

"A point we will make is how much the environment and the economy are going together now," Dion said. "We have to think about jobs when we fight climate change.

"It's a point we'll make with the new U.S. administration. It's a way to engage them."

Hosting Biden doesn't run counter to that aim, Dion said, because it will help Canada bridge the transition between the two administrations.

"We need to speak with the vice-president. There is no concern."

Trudeau told Biden that he went for a pre-dinner run in the snow, where he reflected on the "extraordinary friendship" between Canada and the United States.

He said it "thrives through all the cycles of political seasons, whether it's warm sunshine or heavy snow."

"We do very well in all conditions," Trudeau said. "And this friendship endures."

The decline of the American empire and rise of Donald Trump