Mother 'so proud' of daughter for challenging Trudeau's pipeline approvals 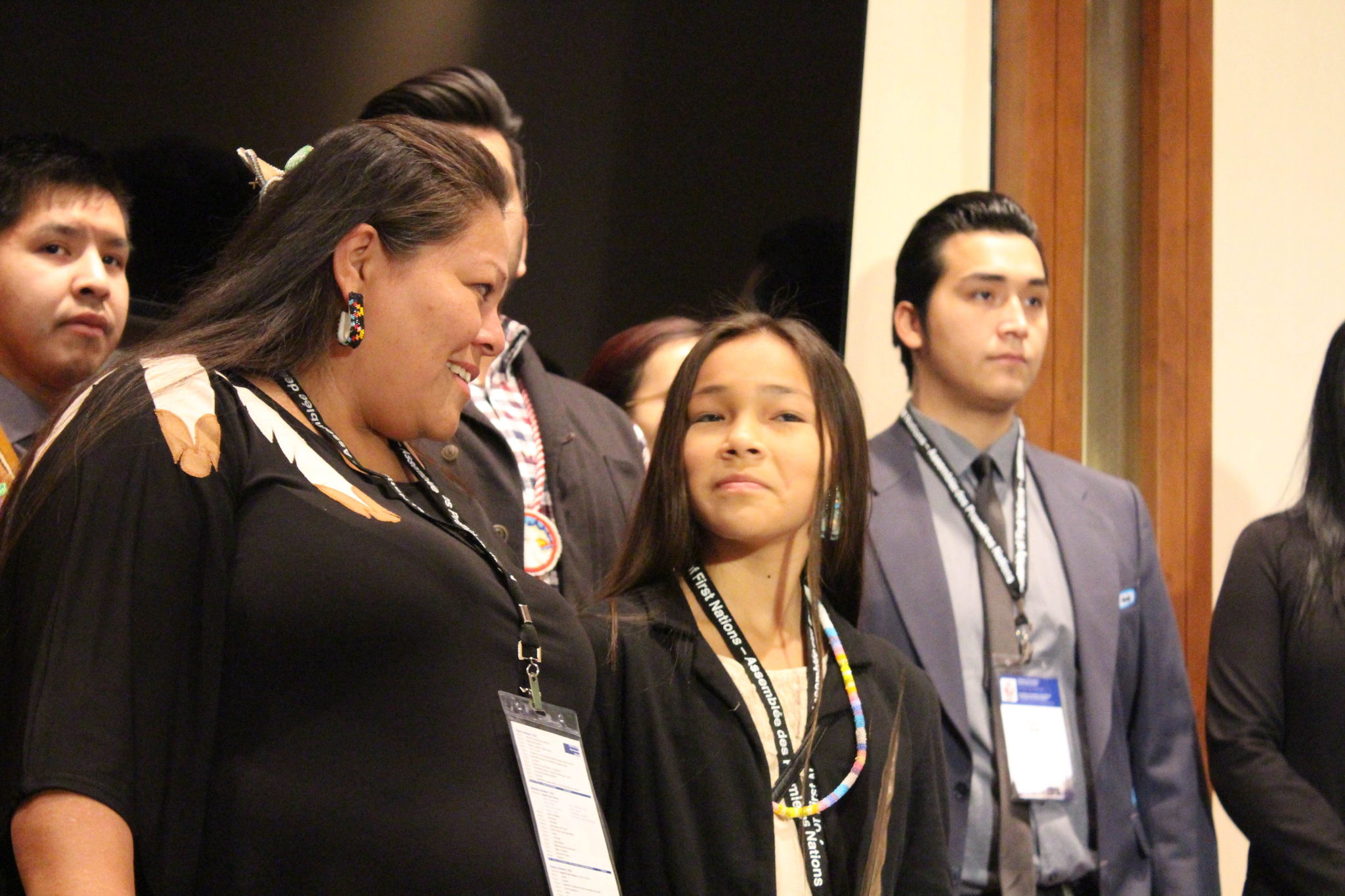 Stephanie and Autumn Peltier attend an announcement in Gatineau, Que. of the Treaty Alliance Against Tar Sands Expansion on Dec. 8, 2016. Photo by Mike De Souza
Previous story
Next story

Stephanie Peltier says her daughter flooded her with questions after being told she couldn’t drink the natural water flowing in their community, the Wikwemikong Unceded Indian Reserve, in northern Ontario.

She had told her daughter, Autumn, that the water would make her sick, but this made the 12-year old wonder — if it makes me sick, won't it make the animals sick too?

Autumn brought those concerns, along with her frustration about recent government approvals of proposed oil pipelines, directly to Prime Minister Justin Trudeau this week at a ceremony to mark his appearance at a Special Chiefs Assembly hosted in Gatineau, Que. by the Assembly of First Nations. Autumn was handing Trudeau a symbolic gift when she told him how she felt and started crying.

Mother couldn't have been more proud

Peltier said she couldn't have been prouder of her daughter for challenging Canada’s top elected official to do better. The exchange was a highlight of several days of meetings as First Nations chiefs debated resource development in Canada.

The conversation comes at a critical time when governments are trying to balance their efforts to boost slumping oil companies with environmental protection.

“I was watching her, and I saw her say something, and I thought: ‘Oh my goodness, what did she just say to him?’ And then I saw her crying and then I knew it was an emotional thing for her and I didn't know what happened.”

As she left the stage in front of several hundred people, Peltier embraced her daughter. Autumn described how she told Trudeau she was upset about his recent decision to approve two major pipeline proposals — Enbridge’s Line 3 replacement and Kinder Morgan’s Trans Mountain expansion — that would add about one million barrels per day of oil in new capacity to Canada’s existing pipeline network.

She told her mother that Trudeau said he would protect the water.

“I got real teary and I told her: ‘He made a commitment to you… he made a promise. So now we’re going to hold him to that promise.’ I was really proud of her (to) stand up for herself and speak up for all the children in our land.”

Autumn's Peltier's speech: Autumn Peltier says she was happy she got the chance to address the Special Chiefs Assembly in Gatineau, Que. in December 2016. Video by Mike De Souza

The federal government and industry say that Canada needs to continue supporting its oil and gas industry since it plays a critical role in the economy, promoting jobs and providing substantial tax revenues that help fund public services.

Dozens of First Nations communities actively support resource development. Many also benefit from contracts with resource companies or revenue generated as a result of the projects in their regions.

One of the chiefs, Jim Boucher from Fort McKay, north of the oilsands hub of Fort McMurray, said that his own community needs the industry, the CBC reported on Thursday.

He also argued that environmentalists were creating poverty by running campaigns against industries such as the fur trade and resource development — sectors that he said communities now rely on.

"They're the ones who, at the end of the day, were successful in creating poverty in northern Canada, right across the board," Boucher said in the CBC report. "That's why we see all the communities impoverished."

Alliance against the oilsands expanding

But there are now 120 First Nations leaders on Turtle Island — also known as North America — that disagree with Boucher.

They have signed a “Treaty Alliance Against Tar Sands Expansion.” It calls for all of them to work together to block any development on their territory that would facilitate any growth in the oilsands, natural deposits of heavy oil in Alberta that represent the third largest reserve of crude oil in the world, after Saudi Arabia and Venezuela.

On Thursday, the treaty organizers welcomed some new signatories from Algonquin communities in Ontario and Quebec. They said they hoped to add dozens more, including from Alberta, in the new year.

The oilsands have been Canada’s fastest growing source of heat-trapping greenhouse gases, because extraction requires large amounts of energy and water. The high cost of production has also made it hard for producers to compete since global oil prices collapsed in 2014, leading to tens of thousands of job losses in oil-rich Alberta.

Trudeau is hosting Canada's premiers in Ottawa on Friday to work on a national climate change plan. Alberta is introducing its own carbon levy in January and, after Trudeau approved the two major pipeline projects last week, Premier Rachel Notley said she is open to considering the higher carbon price proposed by Trudeau of $50 per tonne by 2022.

Serge Simon, Grand Chief of the Mohawks of Kanesatake, a First Nations community near Montreal, said that they are trying to help Alberta diversify its economy. They hope it can follow the example set by countries like Germany to promote renewable energy that generates tens of thousands of jobs.

“We’re not looking to harm Alberta or its economy,” Simon said at a news conference in Gatineau, Que.. “As a matter of fact, we’re going to point out things that they should have adopted a long time ago.”

Bob Chamberlin, chief of the Kwikwasut’inuxw Haxwa’mis First Nation in B.C., added that he was pleased to see non-indigenous Canadians join their struggle to protect the land and water. He said that part of what is now happening could also help reverse some of the racist actions toward indigenous people since the founding of Canada.

“For far too long, industry and governments have come into our territories and made decisions about what’s going to occur in terms of resource extraction,” Chamberlin said. “And the definition of sustainability has not been something that First Nations have been able to participate in. It has been rammed down our throats time and time again. And many people, many industries, many governments have made a lot of money out of all the resources of First Nations territories.”

But it’s time now, he said, for the government to accept a number of court rulings that have affirmed the rights of indigenous people. At the same time, Chamberlin said that all Canadians need to push the government to do more to protect their future.

“Global warming is so real today and the governments continue to think that building a pipeline is a path to green energy,” he explained. “It is one of the worst oxymorons I have heard. And it is time that this country live up to its commitments. Enough hollow words for First Nations people.

"The time for green energy is now. And the world is now turning their minds and hearts to the need of this and we can either watch this happen or we can take the lead, and I think Canada deserves to be a leader in this.”

Twelve-year-old Autumn Peltier, a clean water advocate who represented Canada at the Children's Climate Change Conference last fall in Sweden, had delivered a similar message in a speech to the First Nations gathering on Wednesday, one day after her meeting with Trudeau. Her mother, Stephanie, lamented that people can't even scoop up water to drink directly from the Ottawa River or other waterways in Canada because of decades of pollution from oil, gas, motorized vehicles and other sources. But she said that everyone must continue efforts to clean up until the day comes when they can drink their water, without getting sick.

“We’re all made of water and water is life and we cannot survive without this water,” Stephanie Peltier said.

Bravo Stephanie from Vancouver Island. Your clear voice speaks for tens of thousands of us in Canada. Mr.Trudeau, have the courage to step back from the precipice of wonton disregard for the science that tells us we are entering the age of climate catastrophe. Protect Stephanie's water supply, the Salish Sea from a disastrous tanker spill, and above all our ecosystem and atmosphere from a calamity from which there is no return. You are a light in a very dark room, Stephanie. Wonderful and very best wishes. Bill Eadie in Nanaimo, B.C.

Stephanie - Congratulations on the stand you made! You will be one of the enlightened youthful voters in a few years who are now becoming educated in real politics. When Mr. Trudeau says "I will protect the water" he is not consciously lying, but he is also (not consciously) being a politician. I'm sure your mom has explained all that to you. You probably understand already that the power of words fade and only actions count. So do his actions contradict his words, or not? I think the contradiction is quite apparent. I expected and hoped for better from this government, but they have lost any credibility they had before the election.

Bravo Autumn! You are not

Bravo Autumn! You are not alone, and with every day, more people stand up and move toward you. All the best from this grandmother. You make us proud.

A 12-yr old girl gets a committment from PM Trudeau that he will protect the water. Pipelines do not protect the water for people, for animals, for the environment, etc. etc. etc . How blind can PM jr. Trudeau be to never-ending pipeline oil spills? This is not "Towards A Just Society" of PM sr. Trudeau!!!

So thrilled that these

So thrilled that these excellent NatObserver articles pressed the CBC into finally running the video of Autumn Peltier speaking on CBC Politics, that I just saw in my newsfeed today. About time!
Very curious now to learn a lot more about Chief Jim Boucher's partnership with the Oil Companies, Maclean's FNFTA revelations about him and the charges of Voter Irregularity against him. Most importantly, how does the health and environmental safety record in Fort McKay measure up with the rest of the Industry? Are they doing a better job out there keeping the NEB in check than we are in the rest of the country?