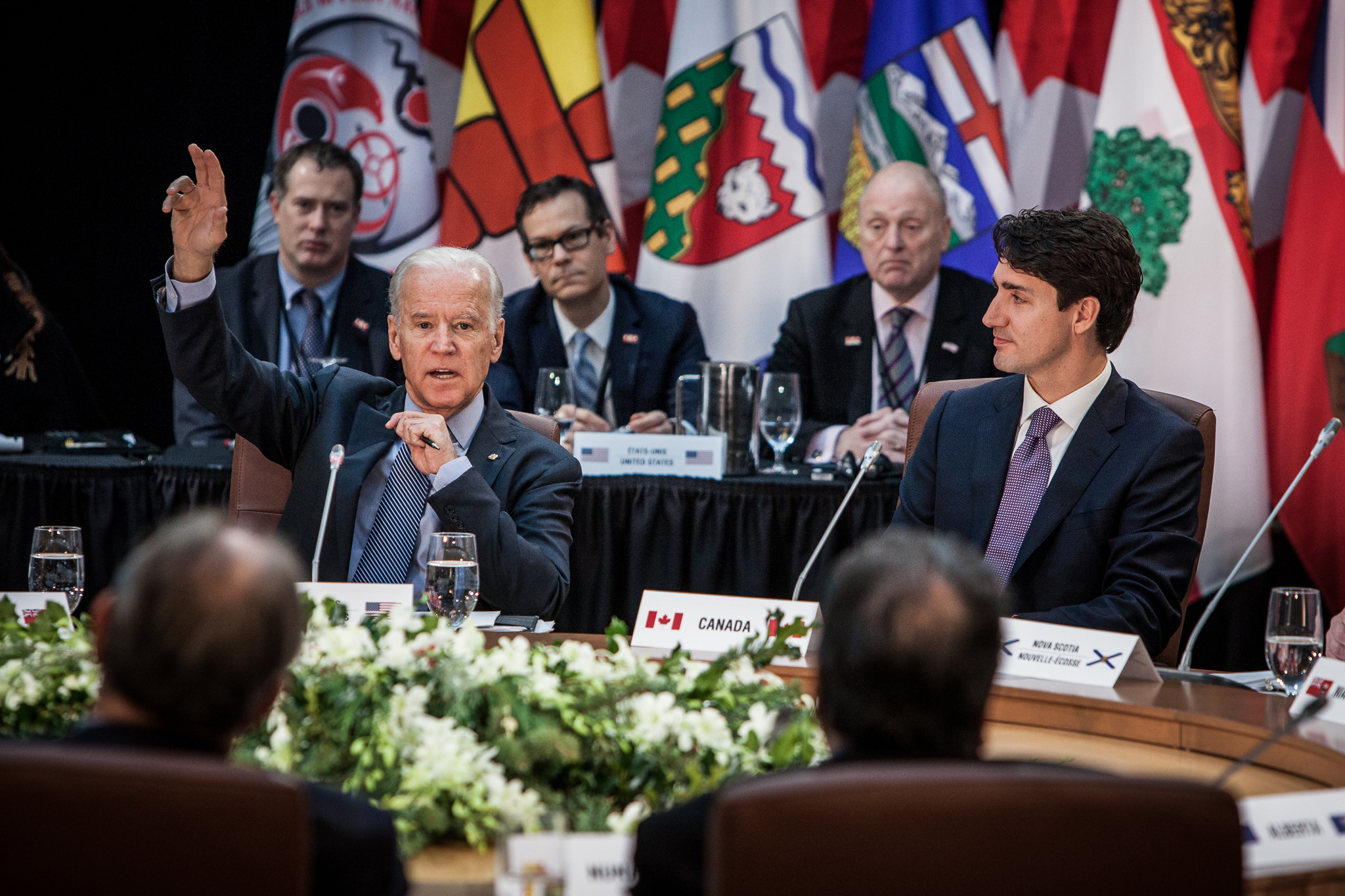 U.S. Vice-President Joe Biden raised his hand in the air and nodded at Prime Minister Justin Trudeau as he praised Canada's climate change leadership and urged a continued path toward a clean economy.

Saskatchewan Premier Brad Wall shifted in his seat, appearing uncomfortable at times to even be in the room.

This was the scene inside a conference hall at the Diefenbaker building overlooking the Ottawa River on Friday morning as Trudeau and Canada’s provincial and territorial premiers gathered at a round table to discuss action on climate change.

Trudeau and the premiers have been trying to hammer out a national climate change strategy and dedicated the full day of talks to reach a new agreement to help Canada meet its international goals while transitioning its economy to clean energy.

Biden was an unexpected guest, scheduling his two-day trip to Ottawa in the past month with only a few weeks left in President Barack Obama’s term in office.

His presence at the Canadian climate talks coincides with a new report from Bloomberg that president-elect Donald Trump's incoming administration is trying to identify names of bureaucrats who worked on Obama's climate change policies as part of a plan to overhaul of U.S. energy strategy.

Plenty of reasons to be optimistic about clean growth, says Joe Biden

Recognizing that many in the room might have concerns about Trump's team — one that includes a number of well-known climate change doubters — Biden said there’s plenty to be optimistic about.

“One of the things the president and I are proudest of having accomplished over the past eight years is debunking the myth that America can’t grow our economy and bring down emissions at the same time. That is simply a false choice. We can do both, we have done both and quite frankly, the growth area is going to be in renewable energy and technology.”

Trudeau has also been criticized by some for his recent decisions to approve two major oil pipelines that open the door to expansion in Alberta's carbon-intensive oilsands industry. But at the same time, environmentalists have also praised the Trudeau government for bringing Canada's premiers together for Friday's summit.

Biden told Trudeau and premiers that there are plenty of reasons to be optimistic, regardless of who is in the White House.

"Obviously, I can’t speak for the next administration, but I tend to take the long view. First of all, none of us should be in this business, unless you’re an optimist," Biden said in a session that was open to the media, before the discussions went behind closed doors.

“Reality has a way of intruding."

Part of that reality includes market forces that Biden said are driving down the cost of renewable energy and making it more attractive than fossil fuels such as coal or natural gas. For example, he said that U.S. consumers are paying a range of about 6.1 to 13 cents per kilowatt hour (kWh) for coal-powered electricity, versus an average of 5.5 to eight cents per kWh for wind and 4.6 to 10.7 cents per kWh for solar energy.

At the same time, he said these sectors are becoming the fastest growing sources of energy, while adding new jobs.

“Whatever uncertainty exists around the near-term policy choices of the next president, I am absolutely confident that the United States will continue making progress in its path to a low-carbon future," Biden said. "And that’s because many of the trends that I’ve mentioned have taken hold and are no longer dependent on government initiatives. They’re market driven. They’re common sense.”

He also said that large businesses are driving some of these trends, noting an announcement last week from Google that the tech giant plans to get all of its energy from renewable sources, starting in 2017.

"Cutting energy costs boosts the bottom line and it's just as simple as that," Biden said. "No CEO in America is going to go back to paying more for energy when they can invest their money in other parts of their businesses. And I can promise you that they will continue to be strong voices, promoting progress and climate action in the United States. There is a constituency that crosses party lines. So regardless of whether the next administration is as aggressive as we were, there's no way to turn back... There's no way to turn back this tide that has begun to roll. The question is time. Time is of the essence."

Trudeau has promised to introduce a price on carbon across the country starting in 2018, as part of national climate policies. While most provinces have accepted this, Premier Wall made a point of posting a video before Friday's meeting, saying that he would "NOT be signing any agreement that imposes a carbon tax on Saskatchewan." Wall said any such deal would harm his province's agricultural, energy and mining sectors and make them less competitive.

Heading into the mtg with PM/Premiers. I will NOT be signing any agreement that imposes a carbon tax on Saskatchewan pic.twitter.com/eD4k6r7COG

She said the goal was still to produce a new framework that, for the first time, establishes a comprehensive climate change plan for the whole country. This made it an "historic day," McKenna said, alongside Indigenous and Northern Affairs Minister Carolyn Bennett. Both ministers were inside the room for the talks.

Prime Minister Trudeau also echoed Biden's comments that climate change is a "reality" — particularly in the Arctic region where some of the strongest warming effects are being observed and felt. He also said that Canada needs to act to be a part of future economic growth around the world.

“Globally, we know that commitments to climate change action are happening, including by the world’s largest emitter, China, which has committed to bringing in a cap and trade system next year," Trudeau said. "And so, we should not wait. The pan-Canadian framework on clean growth and climate change is the opportunity to work together, not only with each other, but also with business and private sector (stakeholders) who want to be part of the solution.”

Biden concluded his opening remarks at the summit by noting that a lot of leadership in the United States and Canada is also coming from local governments in states, provinces and cities. He urged all of the Canadian leaders to pursue discussions and opportunities with all of their counterparts down south.

"It all adds up and as I said, as I look around this room I have a lot of hope because each one of you in each of your provinces and nation know this is important and that’s why I think this is unstoppable," Biden said. "The only point I’ll leave you with is there is no less sense of urgency – a month, six months, a year. It matters a lot to our grandchildren, how quickly we get to the place we have to get."

The talks were scheduled to wrap up on Friday afternoon, with the premiers expected to discuss healthcare with Trudeau later in the evening over dinner.

Have to agree with Biden. We

Have to agree with Biden. We solarized 7 years ago, and at this last summers solstice barbeque with our provider, we saw the new generation of panels. They are three times as efficient as ours, for 1/3 of the price. We intend to add to our array, likely in the summer of 2017, and would encourage every Canadian who understands science to do the same.
Now we're also eyeing batteries, because our provider charges us more in ancillary charges...whatever those are, then it does for the energy. We owed them $1. in Oct, but they wanted $39. Energy companies need to wake up. Their monopoly days are drawing to a close.