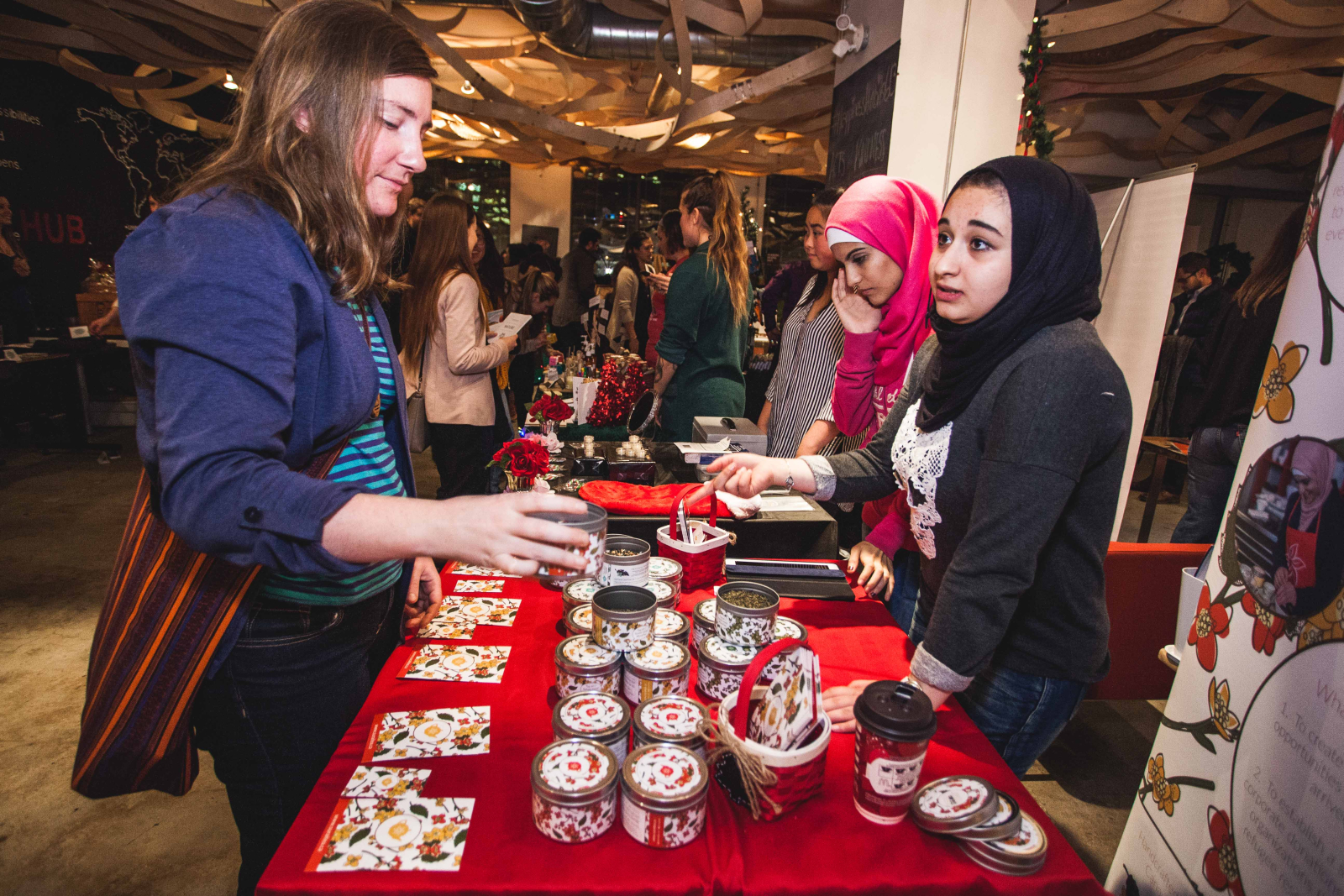 In Ottawa, some Syrian refugees only need a cup of tea to get their first sips of Canada's job market.

SuraiTea is the brainchild of University of Ottawa MBA student Kevin Smiley. It's a tea company that first began as a concept in February, and now hires Syrian refugees to package and sell premium organic teas.

"We're trying to create social change, one tea at a time," Smiley says. He describes the Syrian refugees he works with as being stressed out about the months ahead, as government financial support runs out.

His company provides a pathway for some members of the first wave of Syrian refugees that arrived in Canada last year following the Trudeau government's promise to welcome thousands of them to Canada. Many are feeling the pressure of the dreaded "Month 13," when their federal government allowance comes to an end. It means that the refugees need to find jobs or otherwise scrape by on provincial assistance.

"The majority of people I have involved are young. They picked up English quite fast. But it's different from being a young twenty-something just wanting to earn money for themselves. They're earning money for their entire families. They don't want to go on welfare," he says.

A foot in the door

SuraiTea focuses on jasmine tea blends, because the jasmine flower is the unofficial national flower of Syria, as familiar to Syrians as the maple leaf is to Canadians. The country's capital city, Damascus, is also known as the City of Jasmine.

Smiley says that SuraiTea currently has seven people working part-time, and 13 people working as on-call employees when teas need to be packaged. Since the company's inception in February and first production run in mid-April, SuraiTea has provided 400 hours of paid work experience for refugees, and made $19,000 in sales. Right now, the company is trying to focus on getting its product into local shops to increase demand, so that the company can provide more work hours.

Alaa is one of the Syrian refugees who made it into the Canadian workforce through SuraiTea. A young man who spoke virtually no English when he arrived in Ottawa one year ago, his first job was packaging tea at SuraiTea and he used that experience to move on and find a job at a bustling shawarma shop on Rideau Street.

Smiley says his group of Syrian refugee workers have come from all different backgrounds, mostly unrelated to the tea business. "We have a former jeweler, a chef, an olive farmer, and people who used to do HR and accounting."

Immigration, Refugees and Citizenship Canada spokesperson Sonia Lesage said while Syrian refugees do experience barriers such as language, they have access to a range of settlement supports that are available for all permanent residents in Canada.

"It is not expected that all refugees will be able to fully support themselves after just one year in Canada. Refugees are also encouraged to access as many free settlement support services as they need to help them succeed in their settlement journey," she said.

"While we have heard stories of Syrian refugees beginning to work, the majority of these refugees arrived with little or no English or French skills. It will take time for them to develop the language skills which will enable them to find jobs. IRCC’s settlement programs are supporting Syrian refugees in these efforts. The Department works closely with provincial and territorial governments to assess where needs are most acute, identify opportunities for partnership, and to ensure a strategic and coordinated national approach to the delivery of settlement programming for newcomers, including Syrian refugees. This includes reviewing and leveraging goodwill and volunteer offers from various organizations and individuals to support the implementation of the Government of Canada’s commitment to resettle Syrian refugees."

Lesage said IRCC partnered with Manulife, Community Foundations Canada and received funding from companies like CN Railway to put $5 million toward resettlement of Syrian refugees last December, and that thanks to help from various corporations, resettlement of newcomers including Syrian refugees is expected to be successful in the long term.

"Data collected by Statistics Canada show that the settlement and integration process takes time but ultimately works for both the refugees themselves and the rest of Canada," she said. "Within two years after arrival, the median income for newcomers, including refugees, more than doubles."

Husam Aldakhil, works as an executive assistant at SuraiTea. He's a privately sponsored Syrian refugee who worked in Damascus selling microloans in the banking industry. Smiley recalls being deeply impressed by Aldakhil during the job interview, and felt that if he were determined enough to do banking in the middle of a war zone, he would likely thrive in Canada's work environment.

Smiley says the differences between working in Syria and Canada are not hugely significant, but he has been training refugees to adjust their sales pitches to Canadian culture.

"Work is work, no matter where you go," he says. "But in Syria, people tend to offer a special price that's 'just for you (the specific customer)', whereas in Canada, we negotiate, but we don't barter. It's more standardized."

So far, Canadians' response to SuraiTea has been mostly positive despite the rise in hateful attacks since the election of Donald Trump, Smiley says.

In Edmonton, a man was recently taken into police custody after threatening a young Muslim woman with a noose. In Toronto, Richmond, and a number of Canadian cities, posters promoting white nationalism have appeared in mailboxes and on telephone poles, urging intolerance against people of colour. But in the past few months, Smiley says only a small minority of Canadians have reacted negatively to SuraiTea's Facebook ad campaign. Meanwhile, he's met with Minister of Finance Bill Morneau, Green Party leader Elizabeth May, and numerous business and political leaders in Ottawa who have offered support for the project.

"We got some people saying Canada doesn't need more refugees, or to provide jobs to people on the streets in Canada. But to that, I say we're helping take the pressure off of the very nonprofits that do provide jobs for Canadians on the streets. We're both working on the same thing, ultimately," Smiley says. "But maybe only one-in-20 or one-in-40 people respond negatively."

Smiley says he hopes SuraiTea will eventually branch out to helping other refugees around the world.

"Ultimately, I want to turn tea into a medium of positive change for refugees around the world," he says. "In Kenya, the largest refugee camp in the world is home to 400,000 Somalian refugees. And Kenya is also the world's third largest tea producer. We're really hoping to expand to an East African line of teas, and hire other refugees from around the world too. Tea culture is one thing people have in common, no matter where they come from."

Why Fatima wanted to change her photo, or the story of Syrian refugees in Canada