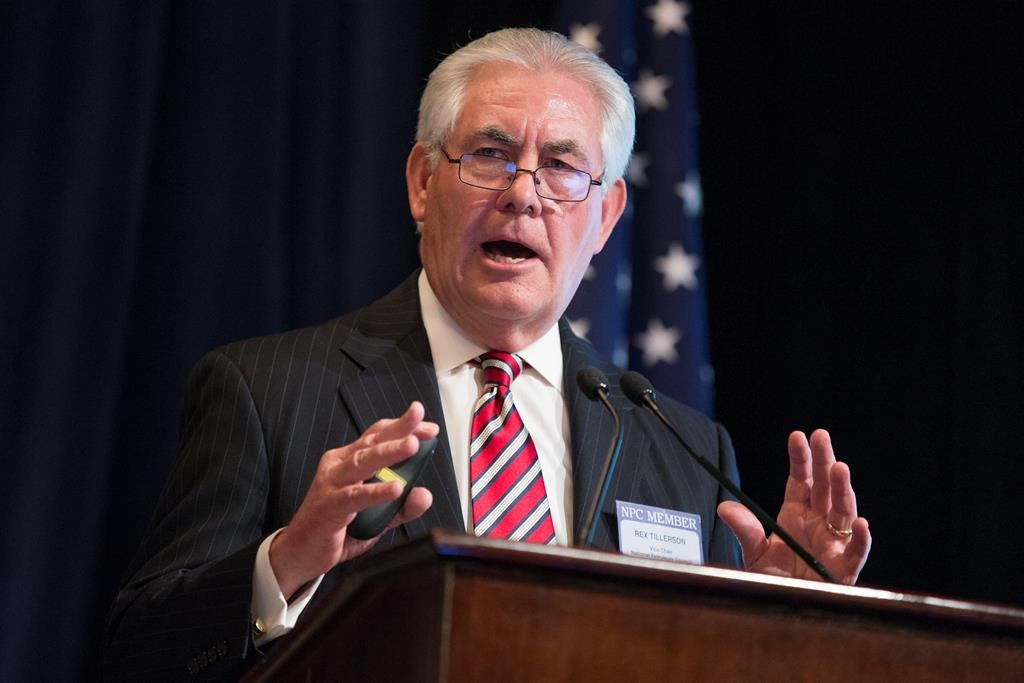 ExxonMobil CEO Rex Tillerson, president-elect Donald Trump's apparent choice to lead the State Department, has ample experience in dealing with other nations, but strictly as a businessman, not a diplomat.

Exxon has operations in dozens of countries, some of them politically volatile or estranged from the U.S. Leading the list is Russia, which has leaned heavily on Western companies for technology and know-how to tap its vast oil and gas resources.

The prospect of Tillerson's nomination for secretary of state has raised concerns, given intelligence reports claiming Russia interfered with the U.S. presidential election to help Trump.

But two people close to Trump's transition team said late Monday that Trump had selected Tillerson to be America's top diplomat. They insisted on anonymity because they were not authorized to disclose the pick ahead of the announcement.

I have chosen one of the truly great business leaders of the world, Rex Tillerson, Chairman and CEO of ExxonMobil, to be Secretary of State.

The thing I like best about Rex Tillerson is that he has vast experience at dealing successfully with all types of foreign governments.

​Tillerson has argued against sanctions that the U.S. and European allies imposed on Russia after it annexed the Crimean Peninsula from Ukraine in 2014. He also has backed free trade and an expansive U.S. presence in the Middle East, stances at odds with the more isolationist approach Trump has pitched to his supporters.

A native of Wichita Falls, Texas, 64-year-old Tillerson is a career Exxon employee, having joined the company after graduating from the University of Texas in 1975 with an engineering degree. Groomed for an executive position, he spent years in the rough-and-tumble world of oil production, working in Exxon's central U.S., Yemen and Russian operations.

By the 1990s, Tillerson was overseeing many of Exxon's foreign operations. He played a key role in Exxon's involvement in the huge Sakhalin oil and natural gas project on Russia's eastern coast. That was a warm-up for a $3.2 billion deal in which Exxon and Russian state-controlled Rosneft announced they would work together to explore for oil in Russia's Arctic region.

In 2011, Tillerson flew to the Russian resort town of Sochi to meet Russian President Vladimir Putin for the announcement. As news photographers recorded the scene, the men shook hands and smiled broadly at each other.

"This project promises to be highly interesting and ambitious," Putin said at the time.

Success in Russia required aligning the company's interests with those of the Russian government, mettle, and good relations with Putin. Exxon steadily expanded its Russian business while its rivals faced expropriation and regulatory obstacles. In 2013, Putin awarded Tillerson the Order of Friendship, an honour given to foreigners who improve relations with Russia.

"My relationship with Vladimir Putin, which dates back almost 15 years now, I've known him since 1999 and have a very close relationship with him," Tillerson said in a speech a few years ago at the University of Texas-Austin.

The sanctions against Russia, if they remain in place for an extended time, could threaten the joint venture with Rosneft, and in 2014 Tillerson urged Western leaders "to consider the very broad collateral damage of who are they really harming with sanctions."

Like other oil companies, Exxon has had to develop its own diplomacy and foreign relations, so many skills Tillerson honed at Exxon could help in his new role, said Antoine Halff, head of the global oil markets program at Columbia University's Center on Global Energy Policy.

Exxon also has operations in Indonesia, Azerbaijan, Chad, Equatorial Guinea, and many other countries, from the Arctic Circle to the southern tip of Australia. Africa and Asia were its leading sources of oil production in 2015.

Tillerson became Exxon's CEO on Jan. 1, 2006, and is expected to retire next year. His heir apparent, Darren Woods, has been in place for a year, so there would be virtually no disruption to Exxon's succession plans if Tillerson were to become secretary of state.

If he becomes secretary of state, by law, he would have to either sell his Exxon shares and stock options or recuse himself from government matters that have a "direct and predictable" effect on his financial interests, said Richard W. Painter, a University of Minnesota corporate law professor who served as President George W. Bush's chief ethics lawyer. Failure to do one or the other would likely result in criminal charges, since Cabinet members, unlike the president and vice-president, are covered by statutes designed to prevent conflicts of interest.

If Tillerson didn't sell the stock, he would have to stay out of decisions for a wide swath of the secretary's job including climate change matters, the oil industry or many dealings with Russia. "There are going to have to be some pretty broad recusals in the State Department on anything that involves oil," Painter said. "In my view, personally, it's unacceptable to have a secretary of state who has a lot of oil company stock or stock options."

Putting the stock in a blind trust would not be allowed because it would remain a financial interest for Tillerson, Painter said.

Still, it's not unheard of for a high-profile businessman to serve as secretary of state.

Bechtel, the big, privately held San Francisco engineering and construction firm, gained stature and prestige — and possibly an advantage in bidding for foreign contracts — when President Ronald Reagan picked George Shultz as secretary of state and Caspar Weinberger as secretary of defence. Both had been top Bechtel executives.

At the time, critics said Bechtel had its own foreign policy, especially in the Middle East and didn't particularly care if its objectives were not aligned with those of the U.S.

Oxandrolon-Libido
Take into account computer centered homeschool courses. As technology gets better and better, it is important that you educate your son or daughter how to appropriately get around a computer. Why not have them do their school job on the web. There are numerous benefits to this. 1 advantage may be the substance depends on date. One other good factor is basically that you, as the child's instructor can check on his advancement without the need of to take care of his paperwork. Furthermore, it permits you to have less university material lying all around.
Dress And Trainers
A good way to increase your apnea is to shed extra weight that you are currently having. Being overweight or overweight places pressure on the neck area, which may compress your windpipe while you sleep. Burning off just 25 pounds can make a big difference with your signs or symptoms, and burning off adequate bodyweight can get rid of the ailment totally.
Barbour Beaufort
Unfortunately, eliminating insects from a home can be hard. Thankfully, utilizing the appropriate approaches, it truly is easy to get rid of them, regardless how awful they can be in your home. Now you are equipped with this phenomenal advice, squash individuals horrible pests and take again manage of your home.Lose Weight Inside The Twinkling Of Any Eye With This Fast New Diet!
Testosterone Booster Nz

Anavar-Ciclo
Avoid using soaps with heavy scents across the vaginal canal in order to avoid candida albicans. The chemicals in these merchandise can inflame the genitals, resulting in itchiness and irritability. This raises the chance of developing a candida albicans. It is additionally a good idea to stay away from goods that use chemical dyes round the genital place.
Air Max 2014 Bleu
Shares are just one particular component of a general investment technique. You should also continue to keep fluid resources in an emergency account that one could take away from effortlessly every time the necessity arises. It is also probable that your investments might not conduct along with expected. When your money develops, take into account that you will most likely need to also raise the amount located in your unexpected emergency account.
Testosteron-Lovlig-Norge
Don't depend on your camera's focus. Have a close as you possibly can before you begin to apply your focus. Zooming in may help, but after some time the photo will get altered. You're more well off acquiring as close to the topic as possible prior to deciding to try and zoom in upon it.
New Balance Shoes For Sale

Woolwich Nandos
There has been reports who have shown that people who are suffering from allergic reactions are finding alleviation by incorporating honey inside their diet regime. However, not technically proven, it is actually truly worth trying. So next time you will be with the farmer's market place, get some neighborhood darling and find out if this helps in reducing your signs.
AnabĂłlizantes Naturais
When cleaning bedsheets, packed creatures and also other delicate-work surface things, use 130-degree normal water. H2o must achieve this temperature prior to it really is guaranteed to get rid of dustmites. For additional security, you can place bedsheets in garbage bags and items it from the fridge for a couple hours well before laundry it. Really chilly conditions destroy hypersensitivity-activating mites, way too.
Proviron-Wiki
It is important to have a comprehensive strategic business plan before you set time and effort and cash right into a enterprise. Put together a strategy and inquire a specialist expert to look it over. They provides you with an unbiased analysis. When you have a great program, be able to work! As soon as your enterprise receives moving, you can start refining the specifics.
Comprar Dianabol EspaĂ±a