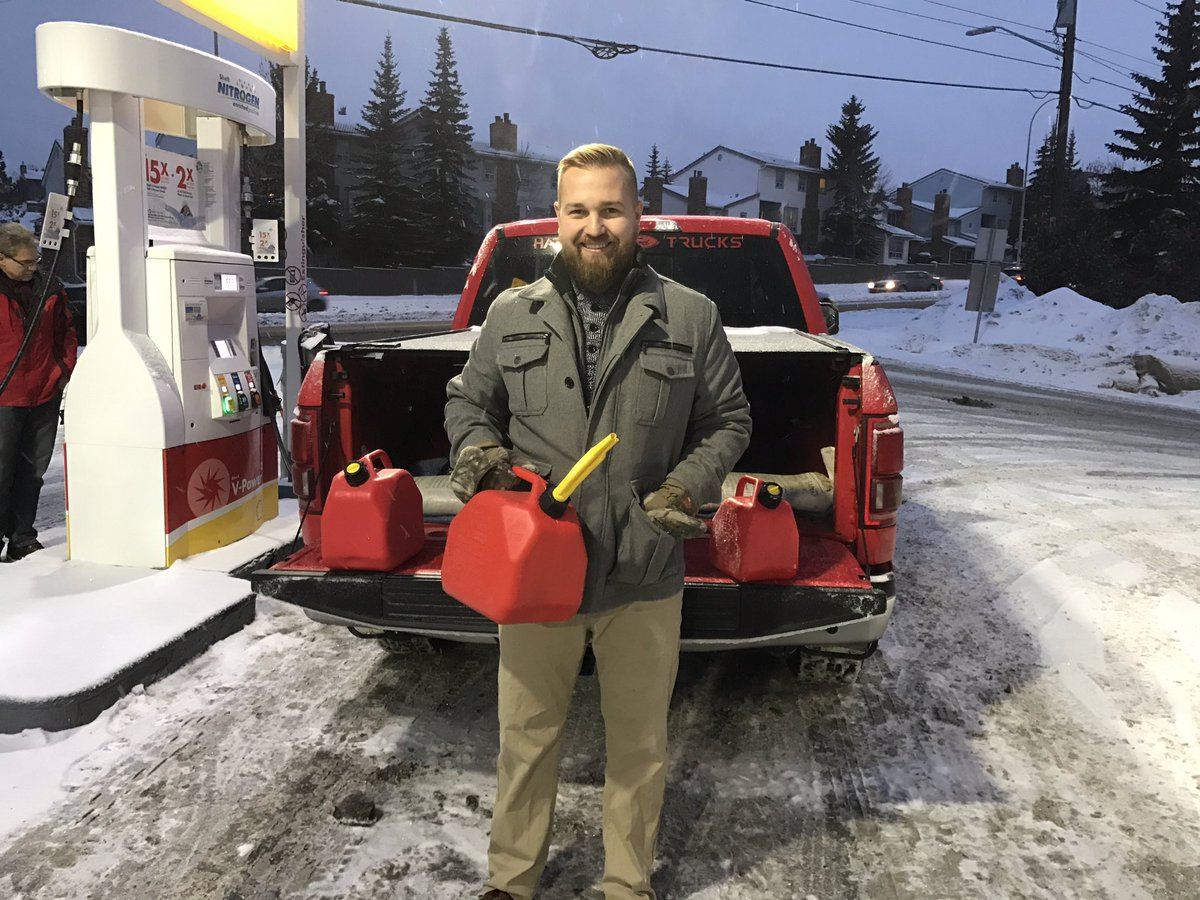 Alberta's NDP government jumped to defend its new carbon tax from detractors on New Year's Day as consumers got their first taste of some of the new prices they'll be paying in 2017.

Deputy Premier Sarah Hoffman addressed reporters at the legislature on Sunday, where she stressed the link between the tax and getting pipelines to tidewater approved.

Hoffman notes Prime Minister Justin Trudeau was clear when he approved Kinder Morgan's expansion of the Trans Mountain pipeline in November that the decision would not have happened without Alberta's climate plan.

Gasoline at the pumps rose 4.5 cents per litre on Jan. 1, prompting an Opposition Wildrose MLA to post a picture of himself on Twitter on New Year's Eve filling jerrycans before the price jumped.

"Fillin' up the truck & every jerrycan I can find before the Carbon Tax strikes at midnight," wrote Wildrose member Derek Fildebrandt on Twitter.

Fillin' up the truck & every jerrycan I can find before the Carbon Tax strikes at midnight. #ableg pic.twitter.com/HK9KpU5j4P

Hey man, do you need me to lend you some money?

I live in BC, where we have a carbon tax, but I still have money. You can have some. https://t.co/L5UWcydHCt

Home heating and business fuels go up, too. But the government's plan also includes other tax rebates for Albertans, and it has been praised by both environmentalists, industry leaders and the Trudeau government.

Former Conservative MP Jason Kenney, now seeking the leadership of the Progressive Conservative Party of Alberta, also posted a video of himself at a gas pump, protesting the NDP's climate change plan. But Kenney's video did not provide any proposals of his own to address the threat of climate change.

Filled up my pickup at FasGas tonight, before the NDP carbon tax makes it more expensive at midnight: https://t.co/FDnyzf7d5O

Scientists have said that the planet is facing irreversible damage to its ecosystems and its economy if it fails to stabilize the concentration of heat-trapping greenhouse gases in the atmosphere. This pollution is rising because of the burning of fossil fuels such as oil, gas and coal. Alberta has also been hammered since 2014 because its oil rich economy has lost tens of thousands of jobs due to plummeting global oil prices.

The NDP government's plan proposes to diversify the provincial economy and encourage the development of more renewable forms of energy.

Hoffman called on Albertans who have opposed the government's climate plan to come together for the sake of seeing the Trans Mountain pipeline to completion.

"It's the best way for us to protect for the environment and protect jobs and get pipelines built," Hoffman said.

"While it's four-and-a-half cents today, it's billions of dollars for our economy and for economic diversification that are crucially important for Albertans and Alberta communities."

Alberta isn't the only province where green initiatives were expected to affect prices starting on New Year's — Ontario's cap and trade program to curb carbon emissions also kicked in.

The plan, which is aimed at reducing greenhouse gas emissions to 15 per cent below 1990 levels within four years, will drive the price of gasoline up 4.3 cents per litre and increase the cost of home heating by up to $6.70 a month.

The Alberta government estimates the average family will pay $443 more in 2017, but opposition members say it will be at least double that as the carbon tax dominoes through the economy and consumers pay for it through higher prices.

Wildrose Leader Brian Jean said in an emailed statement Sunday that the price of everything is rising at a time when Albertans need a break.

"The vast majority of Albertans do not support this carbon tax, no matter how much money the NDP waste on ads promoting it or how many ministers they send out to spin a job-killing tax," Jean said.

A few months ago, several Wildrose members were forced to apologize after they were criticized for comparing the carbon tax to a famine in Ukraine that killed millions of people in the 1930s.

The Alberta government has another scheduled a media availability on Tuesday where Environment Minister Shannon Phillips is scheduled to talk about the levy, rebates and further steps.

Editor's Note: The headline of this story was updated to clarify that the Alberta NDP government was defending its climate plan.

Gas went up about 8 cents a

Gas went up about 8 cents a litre in Interior BC a week or two ago, for no very obvious reason. There didn't seem to be any panic in the streets. Maybe gas price hikes are only okay in Alberta if some profiteer is the recipient of the benefit, rather than the environment or the populace at large.

Sad that politicians there are protesting the right to continue thoughtlessly polluting for free, which has brought our world to a precipice already. You'd think perhaps they hadn't taken a moment to read any of the relevant science, but I'm sure that couldn't be the case, as that would be irredeemably irresponsible. Surely that kind of person wouldn't put themselves forward for a leadership position?

Our own Premier needs to quit stalling on raising our own carbon price further, and putting the proceeds toward a rapid conversion toward renewable energy and active transit expansion. Why would Clark appoint an expert panel and then ignore all of their recommendations? That would also seem irresponsible and hypocritical. Surely not.

If renewable energy made

If renewable energy made sense, we would be using it now. As a full replacement for other energy sources it fails often and we need to do far more research and development.. In the meanwhile, the prevailing POLITICAL opinion that we are causing some sort of disaster is being demonstrated as false every day.

The reason that there is a protest against the carbon tax is simply that is a tax on everything that we know will rise in time. And the burden will fall on the people in our society who can least afford it. It's immoral to destroy people's opportunities and livelihoods based on an overblown political consensus about a minor atmospheric phenomenon.

The folks having fits over

The folks having fits over less than a nickel per litre are the ones demanding mega increases in tarsand output, because they somehow believe this will bring prices UP despite the global glut. Would they be objecting loudly to gas prices if they were back at $1.30, or should I feel sorry that their overly-generous government incomes mean they won't get a rebate? Get a more efficient vehicle and stop grandstanding.

Mr. Kenney and people like him, including people who say they care about the environment and believe that humans are responsible for the changing climate (I'm not sure about Mr. Kenny's position on that matter), who buy and use light trucks (or pickup trucks) as passenger cars are largely responsible for the increase in GHG emissions in the passenger transportation sector here in Canada and in the U.S. A surtax on less energy efficient passenger cars should be implemented to discourage people in buying those vehicles. Around the world, different countries have put carbon taxes on fossil fuel (from US$3 per ton in Japan, to $50 in Norway and $150 in Sweden); it has been efficient (not much in Japan) in reducing people consumption of fossil fuels in the building sector particularly, but not very efficient in getting people out of their cars, even in Sweden where the price for a liter of gasoline is around $2. In North America, people are bombarded by publicity for light trucks and big luxury SUV's. Electric cars and more efficient passenger cars like hybrids don't get any or very little publicity.
It's okay for environmental group to target oil and gas producers as they are the largest GHG emitters in Canada, but more emphasis should be put on the demand side for fossil fuels. A carbon tax is a good beginning but it's not enough. Alternatives for people transportation have to be developed on a large scale and rapidly if we want to avoid the disastrous effects of a changing climate. These consumer trends have to be reversed.

Perfectly understandable. Conservatives don't believe in taxes or science, so they shouldn't be forced to pay these frivolous charges to keep their big blue pickup trucks running.