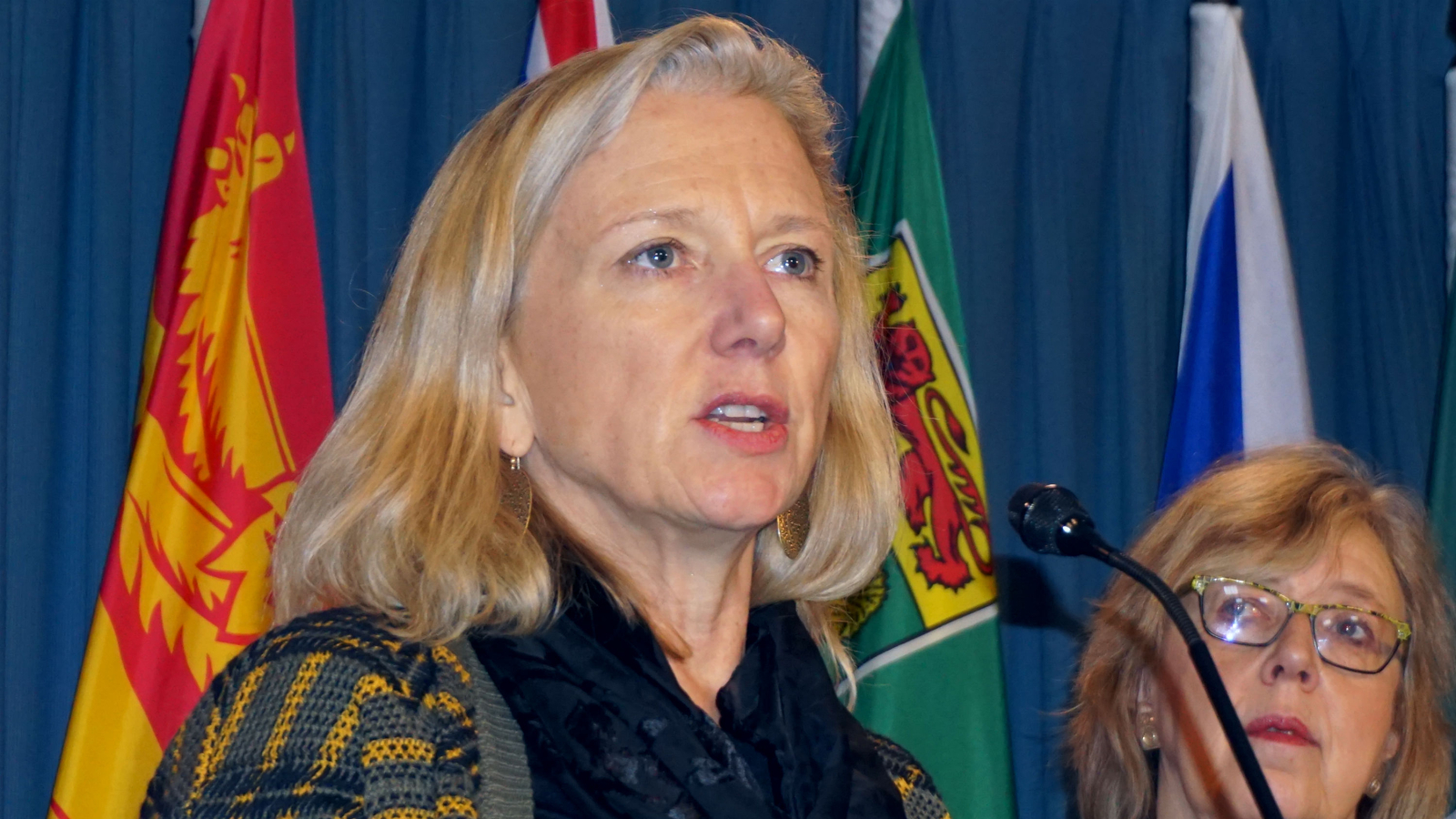 Daphne Wysham, director of the climate and energy program for the U.S. Center for Sustainable Economy joins Green Party leader Elizabeth May during a climate action press conference in Ottawa on Mon. Feb. 6, 2017. Photo by Elizabeth McSheffrey
Previous story

If you're an American activist pushing for strong action on climate change, these are dark days.

According to Daphne Wysham, director of the climate and energy program at the Center for Sustainable Economy in Oregon, the "state of affairs" in America is "completely unprecedented."

At a press conference in Ottawa on Monday, she not only referenced President Donald Trump's new travel ban targeting people from predominantly Muslim countries, but his crackdown on American efforts to mitigate the climate crisis.

In the first few weeks of Donald Trump's presidency, she said, a bill has been introduced in Congress to dismantle the Environmental Protection Agency (EPA), all reference to 'climate change' has been removed from the White House website, and Trump has signed presidential memorandums supporting the Keystone XL and Dakota Access pipelines.

The former CEO of ExxonMobil, Rex Tillerson, has been named secretary of state and Trump's pick to lead the Environmental Protection Agency (EPA), Scott Pruitt, is a known climate change-denier.

"This administration has hit the ground running at a record pace, everybody is talking about it," said Trump proudly during his first weekly address from the White House on Jan. 28. "We are doing it with speed and we are doing it with intelligence and we will never, ever stop fighting on behalf of the American People."

But despite Trump's resolve, hope is not lost, said Wysham, who stood side-by-side with Green Party leader Elizabeth May on Monday. Even without support from the national government, she told reporters, municipalities, states, and grassroots activists will press on.

“We are not going to take this assault on our rights, our rights to clean air and water, sitting down," said Wysham. "We’ve only just begun to resist the Trump agenda.”

Mass mobilization in the U.S. on climate

Only hours after Trump formalized his support for the controversial Keystone XL and Dakota Acess pipelines — both of which had been rejected by the Obama administration — thousands of people across the country marched to protest his decision. If the government plans to put such widely-opposed pipelines on American soil, said Wysham, it should expect tractors, cattle, and piles of angry citizens to be blocking the construction route.

But climate activism in Trump's America is not contained to pipelines, she added, it includes local and regional clean energy solutions and pledges to reduce reliance on oil, gas, and coal. The City of Portland, Ore. for example, recently imposed a ban on all new infrastructure that transports or stores fossil fuels, prompting 10 other municipalities in Oregon, Washington, and California to make similar commitments.

The City of Seattle, Wash. is currently considering a US$3-billion divestment from Wells Fargo for loaning cash to a funder of the Dakota Access pipeline, and all of the American C40 cities — including New York, Chicago, Boston, Los Angeles, and San Francisco — have pledged to meet their climate obligations under the COP21 Paris Agreement, regardless of whether their president withdraws.

"Trump can do all he wants at the federal level, but the states and cities are moving forward on what is very clearly in their area of jurisdiction, which is protecting the health and wellbeing of their citizens," said Wysham.

"And I do want to say a special thanks to the Canadian scientists, because they have recovered and preserved the climate science that is being scrubbed from the U.S. government websites as we speak. We’re counting on that kind of collaboration and collegiality as we tackle what is perhaps the gravest threat to human kind."

Canada should pick up slack: May

On the election campaign trail in 2016, Trump promised to "cancel" America's commitment to the landmark COP21 Paris Agreement, which aims to keep global warming restricted to two degrees this century. Despite having won the election however, international law would make it difficult for him to withdraw from that commitment within four years.

That raises concerns that he will soon make good on a promise to withdraw all funding from the UN Framework Convention on Climate Change, said Green Party leader Elizabeth May, and redirect all climate programming funds to infrastructure projects. If he did, she said Canada should pick up the slack, not only as a matter of necessity, but also to send a message to Trump's administration.

“We need to do more if the U.S. does less," she told reporters. "It’s not a case of a political agenda that should shift, it’s the real threat of climate change, which is not hypothetical and happening every day and worsening... We will also need to have as clear a message as possible to President Trump that moving away from reaching the Paris Agreement is simply not going to be acceptable to the rest of the world and the rest of the parties to that agreement.”

Canadian scientists, NGOs, and climate organizations can continue to share support and resources with their U.S. counterparts, said Wysham, in addition to Canada reducing its own carbon footprint through increased investment in clean energy infrastructure.

But Canada can also send its own clean energy south of the border, added Amin Asadollahi of the International Institute for Sustainable Development (IISD). Through regional pacts and state-level alliances, he said Canada may be able to counter some of the effects of Trump's support for pipelines and the emissions-heavy coal industry.

“There are three big buckets," Asadollahi, North American lead for IISD's climate mitigation program, told National Observer. "One is the opportunity to de-carbonize the U.S. electricity grid using Canadian renewables as base loads."

Canadian clean energy exports to the U.S. were set to triple under the Clean Power Plan of former president Barack Obama, but Trump has vowed to cancel that initiative. If Canada were to export its hydro, wind, and solar energy to the U.S. however, Asadollahi said it would bring thousands of infrastructure jobs south of the border — a factor the U.S. may want to consider.

"In order to get our electricity to U.S. markets, we need better electrical infrastructure and transmission lines," he explained. "That means real jobs on the ground in the U.S. for these projects."

Canada's second opportunity, he added, comes in the form of regional partnerships. And some already exist — in 2015, the premiers of Quebec, New Brunswick, P.E.I., Nova Scotia, and Newfound and Labrador partnered up with the governors of six New England states, and agreed to decrease carbon pollution by up to 45 per cent below below 1990 levels by 2030. The leaders have met annually since 1973.

On the West Coast, members of the Pacific Coast Collaborative — including B.C. Premier Christy Clark and the governors of Oregon, Washington, and California — recently signed a regional climate and energy action plan, which aims to accelerate the transition of West Coast vehicle fleets to zero-emission models and reduce gasoline and diesel consumption by 25 per cent by 2030.

The third 'bucket,' said Asadollahi is carbon credits and exchange programs, similar to the existing agreement between Quebec, Ontario and California. Irrespective of who is in power of Washington, said the Ottawa-based researcher, "subnationals" across North America can still co-ordinate climate action.

With Trump et.al. trashing the science at NASA, NOAA, EPA, etc., there may be an opportunity for a reverse brain-drain to Canada, making us a powerhouse in Environment and climate change. Of course, the question is where is the funding going to come from. Maybe those fossil fuel subsidies?