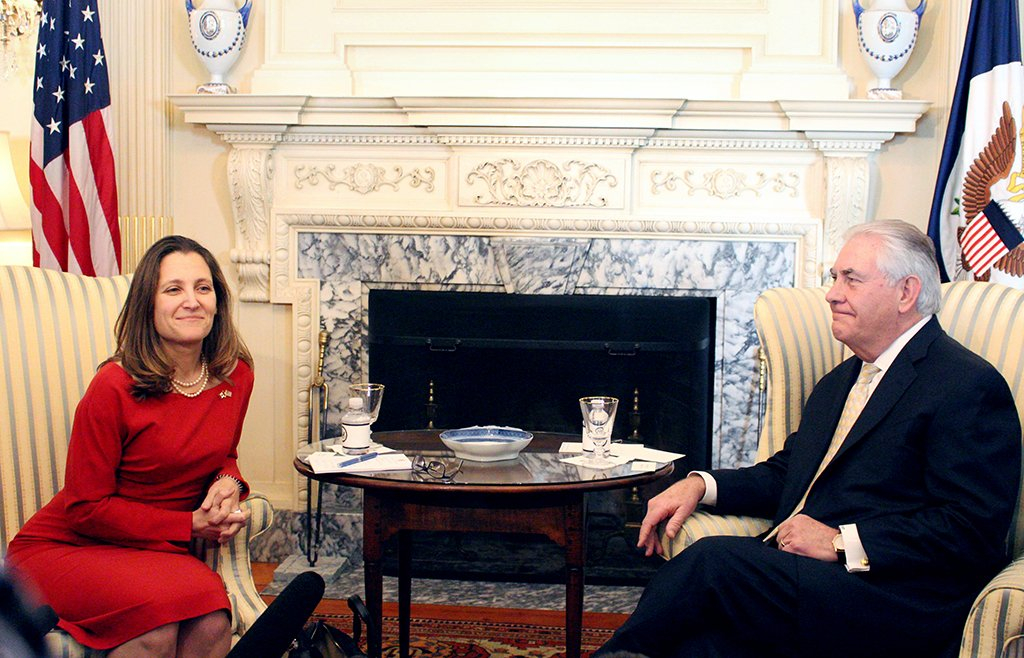 Canadian Foreign Affairs Minister Chrystia Freeland sang the praises of Donald Trump's new top diplomat, U.S. Secretary of State Rex Tillerson, after wrapping up a series of meetings in Washington Wednesday focused on the interdependence of the Canadian and American economies.

With much uncertainty hanging over Trump's foreign policies and their potential impact on the Canadian economy and Canada-U.S. trade, Freeland said that Tillerson, who until a few weeks ago was chief executive of oil giant Exxon, would be good for Canada.

Freeland and Tillerson discussed an array of issues in a private meeting, including what her department described as "the importance of the economic relationship between both countries, which supports millions of middle class jobs on both sides of the border.‎"

"I just want to underscore that Secretary Tillerson is someone who knows Canada very well and in particular has a very strong understanding of the mutual benefits of the Canada-U.S. relationship, and I think will be a good partner for us."

Freeland made the comments during a cordial 35-minute phone call with reporters. The minister was not asked whether she raised climate change or other environmental issues with Tillerson. President Trump has expressed doubts about scientific evidence showing how humans are contributing to climate change, and his administration is expected to retreat from plans introduced by the former Obama administration to aggressively tackle the problem and to participate in the international Paris agreement.

National Observer subsequently attempted to ask the questions about whether she had pressed Tillerson on climate change, but there was no immediate response from her office.

Earlier, Global Affairs Canada said in a statement that Freeland and Tillerson had also discussed security, continued support for the North Atlantic Treaty Organization, the global fight against Daesh, the future of Syria, the situation in the Eastern Ukraine, among other international issues. Freeland's discussion with Tillerson followed a series of private discussions with other U.S. leaders, including Speaker Paul Ryan, the highest ranking member of the U.S. House of Representatives, and Sen. John McCain, a former U.S. Republican presidential candidate in 2008.

It looks as if our federal

It looks as if our federal government would rather cozy up to bullies than stand up to bullies. They see business as more important that human rights or saving the planet. They'll go along with the deniers to the south for the sake of corporate profits and claim they're doing it for the sake of jobs. Watch them renegotiate NAFTA and end up with something even worse than we have now.

Thanks for the report - and

Thanks for the report - and Reynold thanks for your comments.

My God but I'm so tired of

My God but I'm so tired of Trudeau's government already, and he's not even half through his tenure yet! I can't imagine all this kowtowing without some talk of science and global warming. In this precarious world position we occupy relative to survival of our species how could Freeland believe the oil and gas economy is the most important aspect of our government"s responsibilities? Trudeau's policies remind me of that excruciating torture called "death by a thousand cuts". How can we impeach this government?

Canada's fragility has never been more apparent. Doubling down on the vision of Canada as a prosperous multi-cultural social democracy would be a magnificent way to harness global people power in the face of Trump, but who is actually leading such a charge?

We have a virtue signaling duplicitous Prime Minister Trudeau has squandered his opportunity to lead at home and abroad. He has withered in the face of demands for direct democracy, and instead advanced the Mulroney agenda of incremental manifest destiny sought by his corporate backers.

We have a splintered progressive political movement that can't even decide if Canada is worth fighting for. The colonial settler framework holds the nation state of Canada as the biggest impediment to Indigenous self determination. How can we overcome such a barrier when Canada's government has no political integrity and self immolates in favour of increased corporate rule?

We have a green movement hell bent on destroying capitalism, the fur trade, wild meat harvesting, the fossil fuel industry.... - immediately disempowering the population from building its own industrial capacity.

Canadianvalues.ca - "The Institute for Canadian Values is a national think-tank dedicated to advancing knowledge of public policy issues from Judeo-Christian intellectual and moral perspectives, as well as building awareness of how such perspectives contribute to a modern, free, and democratic society."
Sounds a lot like the resurgent Judeo-Christian value system Bannon is pursuing.

Given the massive internal division across progessive groups, and the fact that Canadian values apparently match Bannon's mission, it would not suprise me to see increased integration between Canada and the USA. A revised NAFTA, reinvigorated NATO, will all mean more American involvement in our business. We are only one continental security scare away from increased USA military presence in Canada, especially with Russia as our northern neighbour. The Alaska Highway project could serve as a precedent for such a development.

PS Did anyone else find it unbelievable that the TSX reached an all time high the same week NAFTA was reponed, and the Loonie strengthened vs USD? This would have been impossible if a left of centre government had done the same action....something is up.

I've been thinking about a

I've been thinking about a lot of the same issues. It's unnerving to watch it all unfold.

You lost me there.

This was an interview that told us nothing at all. It is simply pap to give the journalists to allay any questions or public concerns. I do understand that Canada is not in a position to criticize the U.S. during this time of transition to a new government whose cabinet is still not completely in place. But indications so far that indicate serious differences are ominous. The trumpet of international discord is blaring and we should all be listening.

These are dangerous times. Trudeau is our Prime Minister so we need to acknowledge that, support our government and hope that he does have the intelligence and will to stand firm for Canadian values. If not, we will change our government.