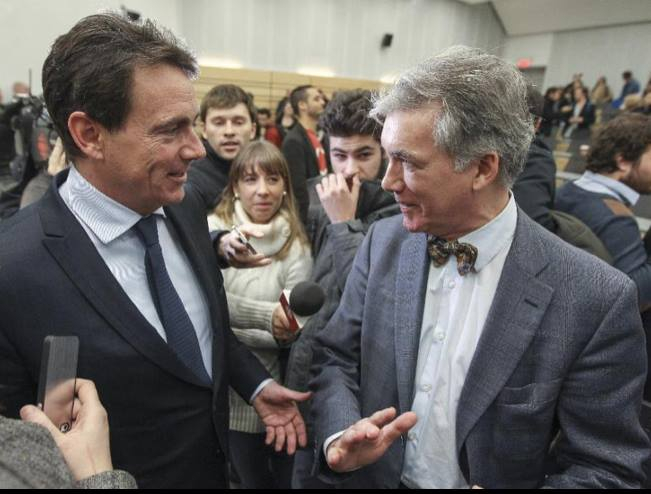 Lawyer Daniel Turp says he will appeal a Jan. 24 federal court decision barring judicial review of the Canadian government’s exports of heavily-armed Light Armoured Vehicles (LAVs) to Saudi Arabia. The legal challenge would create a new obstacle that could block the controversial deal from proceeding as planned.

Turp, a Université de Montréal law professor, says National Observer’s discovery through an Access to Information Act request of a lengthy assessment of Saudi human rights conducted by the Indigenous and Human Rights Division within the Department of Global Affairs, was “of utmost importance” in his decision to appeal.

National Observer’s subsequent discovery that neither former foreign affairs minister Stéphane Dion, nor his Conservative predecessor, Ed Fast, was briefed by the authors of the human rights assessment, was an equally important deciding factor, Turp said. Federal lawyers had previously told the court that Dion was fully briefed and informed before approving the export permits, National Observer reported last month.

In her ruling, Federal Court Justice Daniele Tremblay-Lamer said that Dion had "broad discretion" to approve the export permits and that the minister had "considered the relevant factors."

Tremblay-Lamer's ruling also said that Dion's decision followed advice he received through a federal memo in which "none of the branches of government consulted had raised any objection to the issuance of the permits."

Although she based her decision on the “evidence in the record,” Turp noted that her analysis did not refer to the human rights assessment from within Global Affairs. Nor did it refer to published reports alleging sightings of Canadian LAVs in the vicinity of human rights abuses.

The version of the human rights assessment released to National Observer is heavily censored. The Office of the Information Commissioner, which has legal power to take the government to court over its censorship of the assessment, is investigating.

The department of Global Affairs declined requests for interviews with former minister Stéphane Dion, and the current minister, Chrystia Freeland.

“The Federal Court has recognized that the former Minister of Foreign Affairs acted within his authority in making the decision to issue these export permits,” Global Affairs spokesperson Natasha Nystrom explained in an email statement to National Observer.

“Should the Department become aware of reliable information that military equipment exported from Canada had been used for purposes other than those for which it was exported, the Minister of Foreign Affairs would consider whether existing permits should be suspended or cancelled, and take this information into consideration for future permits.”

Turp said the judge did not acknowledge information that was published on The Report on Business Magazine website. One report said that Canadian-manufactured LAVs were seen in Najran, on the border of Yemen where Saudi forces have killed an estimated 10,000 civilians in recent months. Another said LAVs were used to suppress demonstrations by the Shiite minority in eastern Saudi Arabia, he says.

"In Saudi Arabia, the fundamental rights of citizens are the subject of serious and repeated violations and there is a risk that the vehicles will be used against the civilian population,” Turp said.

“The violations of human rights continue in Saudi Arabia through the use of armoured vehicles,” Dubaisy said in an email statement to National Observer.

It’s essential that this case be examined fully, says Stephen Staples, vice president of the Rideau Institute, a think tank in Ottawa which has frequently criticized Canadian weapons exports to Saudi Arabia.

“If we have new evidence that suggests the policy was violated, it's in the public's interest to have the matter re-examined,” Staples says. “This is an extremely important case with grave implications for Canadians, and for the people who will bear the brunt of these military exports used by despots in Saudi Arabia, and elsewhere.”

MP Hélène Laverdière is the New Democratic Party foreign affairs critic who has tried to secure Parliamentary oversight of arms exports, now blocked by the Liberals. She said the NDP is “following this case and potential legal appeals with interest, as we have unanswered questions about the consequences of this deal for international humanitarian law and international human rights law.”

“We also have moral concerns about this deal, and are frustrated by the ongoing lack of transparency or accountability from the Liberal government.” Laverdière added. “The NDP will be pursuing this issue aggressively in the House in the coming months.”

An investigation published in the Montreal news magazine L’Actualité on Feb. 5 said that Canada sold $18.5 billion worth of military goods in the past 25 years to 143 countries or territories other than the United States.

Of these, nearly a third, worth $5.8 billion, were delivered to 59 countries that were deemed dictatorships during the year of export by Freedom House, an independent U.S. organization that assesses the state of democracy in more than 200 countries.

L'Actualité also reported that the Canadian government, which has the power to block sales of arms that do not meet its human rights criteria, refused only 0.1 percent of exports in 2015.

A group of 11 countries, such as Algeria in 1994 or Peru in 1992, received military equipment worth a total of $54 million “while in total political terror,” L'Actualité reported.

“The sale of $28 million worth of Canadian military goods to Algeria from 1991 to 2008, while the army's legislative elections were canceled, triggered a civil war lasting more than a decade,” the magazine reported.

The L'Actualité investigation also reported $43.8 million of Canadian equipment was destined for Egypt from 2013 to 2015, just after a coup that led to mass demonstrations and hundreds of death sentences.

Another coup for National

Another coup for National Observer leading to litigation of government. Well done and thanks to Daniel Turp for acting to save lives. Minister Dion would have to be shielded from all media to not have been aware of Saudi rights abuses in other countries since it was all over the media at the time. If he approved the deal with no knowledge of the abuses, he and his department were negligent. Not to mention aiding and abetting mass murder. If the deal stands, they should go to The Hague.