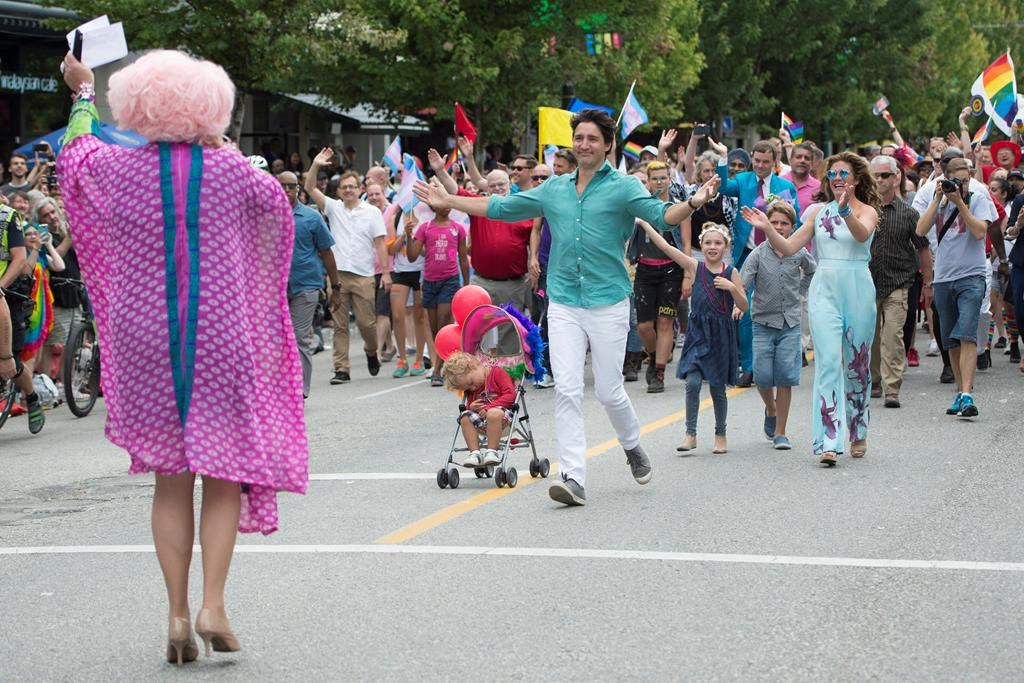 Prime Minister Justin Trudeau participates in the festivities at the Vancouver Pride parade on July 31, 2016. File photo by The Canadian Press
Previous story
Next story

Smiling white police officers in uniform, posing for selfies with brother officers of colour, each adorned with the rainbow paraphernalia of Pride. It’s good stuff, isn’t it? “Our Pride includes the police!” is shouted from metaphoric rooftops. They laughingly trade their MP-5s and 9 mms for Super Soakers, blasting water at the crowd in summertime fun.

But, whose Pride is it? Who is “our” and who does that “our” exclude when the cry is for inclusive Pride parades? If we look a little deeper, it’s all good stuff if you’re white, non-Native, have never suffered from a mental illness, never had your children apprehended, never been homeless, never been sexually assaulted or never been mistreated by the police. Gosh, that “our” is shrinking fast, isn’t it?

I’m a former cop of over 25 years, I’ve lived the L, Q, and T of LGBTQ over those years. Allow me to present a solution: LGBTQ cops who identify with and/or support the queer community are welcome to march and celebrate Pride in plainclothes, off duty or both. Carry your police department banner just like the SPCA or your favourite TV station and march away to your hearts’ content.

For those officers required to police the parade – and this is a necessary thing, traffic control is needed, some folks overdo the drinking, kids get lost from parents – they can and should be in uniform with a response proportional to the perceived need for them. However, for the necklace-tossing, candy-throwing, parade-marching cops, keep them in plainclothes just like the bank tellers, politicians and artists. After all, you’re a person first and a cop second, right?

And herein lies the problem. Until LGBTQ officers wise up and realise that the very institution of policing they have taken an oath to serve requires them to hang up any identity they may have ‑religious beliefs, sexual orientation, gender identity, political leanings‑ on the hook before they don that uniform, they are destined to feel excluded and as though their hurt feelings don’t matter. Because they don’t matter. You want change, LGBTQ police members? Start with your own institution and stop hassling Black Lives Matter.

That uniform carries with it the weight of thousands of children removed from Indigenous families throughout Canada’s history. It represents hundreds of non-white people stopped and frisked without legal grounds simply because of their skin colour. That uniform carries with it the abuse and intimidation of LGBTQ people, sex workers, mentally ill people, economically vulnerable people, many forced onto the streets to interact with police often, sometimes with bad results.

The LGBTQ officers need to realize their sexual and gender identity is a small ‘t” tent they live in, but the large ‘T’ tent is the institution of policing and it carries heavy, nasty baggage for many people who would otherwise like to march in the Pride parade. This isn’t a – forgive me while I choke a little on my own vomit for using a term that really means ignorance and hate – political correctness issue that only affects a small minority. This is about understanding your role and that of your employer in society, both currently and historically.

Black Lives Matter has wrongly become the target for these officers and Pride societies; the real culprit is police culture and policing’s history. I know first hand that once you wear the uniform for a few days, maybe weeks, the novelty wears off and you forget what it symbolizes for many people who aren’t white, economically stable, mentally healthy, educated, cis-gendered, heterosexual, male and all you see is you: the good guy or girl or gender variant person.

I’m sorry to break the bad news, but not everyone sees Good Guy when a uniformed officer shows up on scene. Try to wrap your minds around that, for starters. I admit, it took me some time a few years back, but I got there. That uniform changes the room. It changes the parade square.

This issue has become a queer and civic crisis for the very simple reason that LGBTQ officers feel hurt that people of colour, as represented by the Black Lives Matter movement don’t feel safe or comfortable with a uniform presence at Pride events. Channel that hurt into a little empathy for the people you only can see through a defensive lens, not an sympathetic one. All of these issues only reinforce how very much alike we are, they shouldn’t highlight our differences.

I think I understand how these officers feel. I have been there, upset at being tarred with the broad brush that paints police as bullying goons because there are many, many fine people in policing. It does feel unfair to individual officers. Unfortunately, most of them don’t realize that it is their own police institutional culture and history that makes many not want to march beside their uniforms that symbolize oppression. It isn’t personal. It isn’t about you. So pick your fight with the proper oppressor: the institution of policing and not Black Lives Matter.