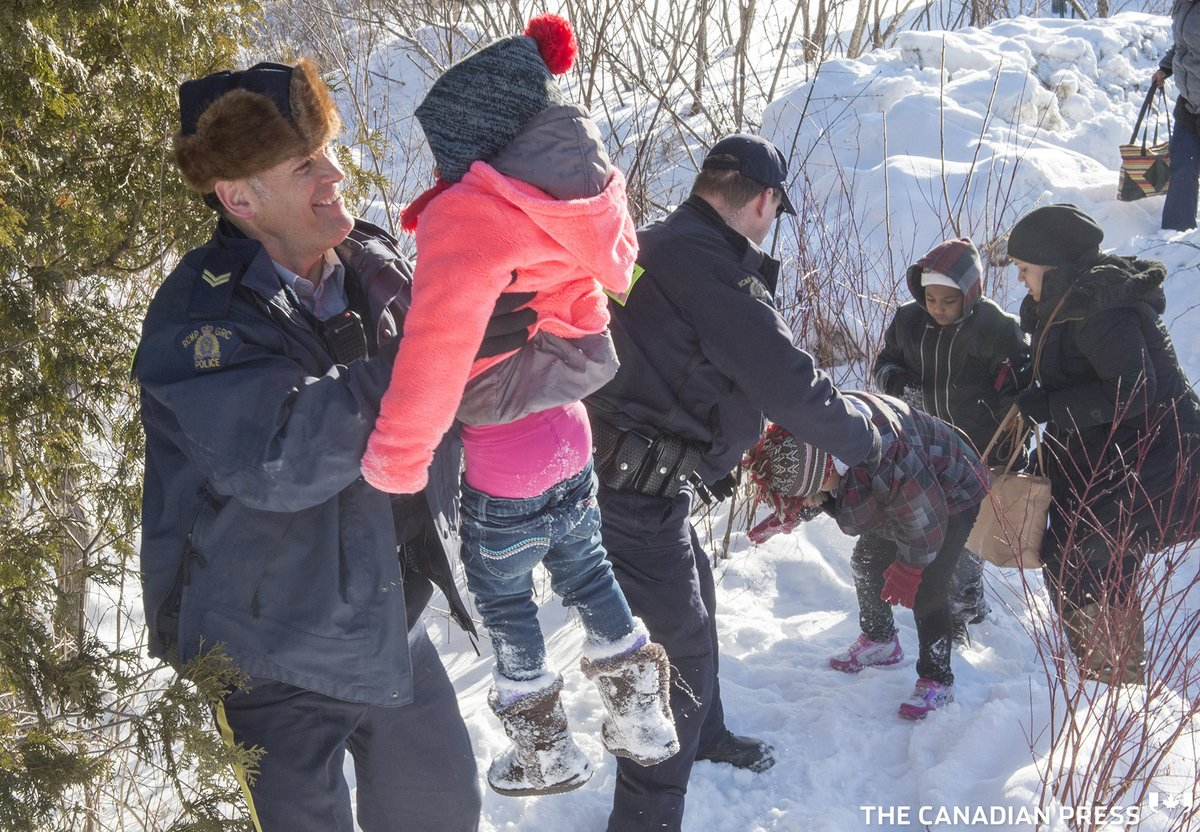 Canadian mounties greeting refugees who walked across the border from America into Canada on Feb. 17, 2017. Photo by Paul Chiasson, The Canadian Press
Previous story
Next story

The term "asylum seeker" may not conjure up images of a U.S. passport holder, but in the first three quarters of 2016, Canada registered dozens of U.S. citizens seeking refugee status on Canadian soil, according to statistics from Immigration, Refugees and Citizenship Canada (IRCC). While it might be too soon to call it a "Trump bump," the number of American asylum seekers in November 2016, at 28 people, was also significantly higher than the same month the previous year, at just five people.

Between January and October 2016, 90 U.S. citizens arrived in Canada by land to seek asylum. It was not immediately clear how many of these claims were granted.

There are no official figures since U.S. President Donald Trump took office on January 20, but the number of refugee claimants entering from the U.S. has been on the uptick, with 40 border crossers arriving in Manitoba and Quebec last weekend, according to the Canada Border Services Agency. Whether any of them were American or Mexican is not known. Published reports show some from Syria, Somalia and Sudan.

With President Trump's recent attempt to halt refugee intake, ban US entry to citizens of seven Muslim-majority countries and plan to tighten the border with Mexico, there could be a surge of people who already have legal status in the U.S. but want to move to Canada to avoid potential persecution, according to Zool Suleman, a Vancouver-based refugee lawyer.

Trump provoked chaos and protest with a series of orders that suspended all refugee intake temporarily, all Syrian refugee intake until further notice and barred entry to citizens of seven Muslim-majority countries (Iraq, Syria, Iran, Libya, Somalia, Sudan and Yemen) even if they had a green card or had lived a long time in the U.S. Some green card holders were detained and questioned for hours.The entry ban was struck down in court but the Trump administration has said it will be rewritten and appealed to a higher court.

Not feeling safe in the U.S.?

Suleman said the higher number of American than Mexican asylum seekers is "an anomaly" perhaps caused by the fact that Canada imposed visa requirements on travelers from Mexico to reduce refugee claims. The restriction that came into effect in 2009 was just lifted in December 2016.

That said, the tense political climate in the U.S. might push more people to escape to Canada.

"It's hard to know how the next 12 months will go," Suleman said. "There will be an increase in people claiming asylum status because they feel they can't stay in America or are feeling persecuted in America. Especially if they come from a Muslim country and become an American citizen but still feel discriminated against in America or don't feel safe."

He said historically, however, U.S. citizens have poor odds of successfully claiming refugee status in Canada. Normally, Americans come to Canada as immigrants in search of a better life, not as refugees fleeing persecution.

"U.S. citizens don't have a good rate of success in the Canadian refugee courts," he said. "Canadian refugee courts' view has generally been that the government of America is able and willing to provide protection and that depending on the type of persecution, there are alternatives. You can go live in other parts of America. American refugee claims will continue to be challenged."

Compared to other countries, relatively few citizens from the U.S. have claimed asylum in Canada over the years. During the January - October 2016 period, refugee applicants included 895 Chinese citizens, 945 Nigerian citizens, and 575 people of Turkish nationality. Only 360 Syrian nationals arrived in Canada claiming refugee status during that time.

But Suleman says there may be more people from south of the border crossing into Canada, out of fear that the White House will succeed in reinstating its refugee ban and take future measures to target people from certain countries. In November, then-president-elect Trump pledged to "immediately" deport up to 3 million undocumented illegal immigrants, and appeared to make good on his promise as he implemented immigration raids last week that resulted in 600 arrests. He called certain Mexican illegal immigrants 'bad hombres' during a presidential debate, and claimed his temporary travel ban — which has since been overturned in court — was designed to keep "bad dudes" from arriving as refugees in the U.S. This rhetoric from the White House could have an impact on migrants who have managed to become citizens in the U.S., Suleman suggested.

"I think some of it is anticipatory. Some are coming across anticipating worsening immigration enforcement and worsening political climate for them," Suleman said.

But he warned that refugee claimants coming to Canada because they had a negative experience in the U.S. could find themselves in a similar situation once they arrive in Canada. Although Prime Minister Justin Trudeau stated in a news conference with President Trump on Monday that Canada was practicing a policy of "openness" toward refugees and immigrants, the reality is that refugees can find themselves not only rejected, but also put in detention centres or jails.

"Some people are coming because they've had a poor refugee claimant experience in the U.S.. Some said they went to the U.S., they were detained, didn't get a lawyer or a fair process, then were denied. These issues existed before President Trump. But people need to know that if they're coming to Canada, they could be detained here as well."

According to Vancouver-based refugee advocacy group No One is Ilegal, 87,317 migrants were detained in Canada between 2006 and 2014, and sometimes put in provincial jails. They can be detained for months, and in cases where the applicant has mental health issues, they may be held for years.

The international laws on

The international laws on assylum and refugees is 67 years old and long outdated. Canada's immigration laws are also outdated and very weak. American citizens are not refugees. Those that have lived in the US for years are not refugees and if they were there illegally, they still don't qualify as refugees. A number of scities and entire states have dr lairds themselves as "safe zones" for those feeling persecuted and Trump's ban was overturned within days. Instead of going to these cities, they would rather illegally cross into a different country. This is cherry picking countries with the best benefits. Trudeau is repeating Merkel's foolhardy mistake and people are coming. Trump seems fine with allowing illegal crossing from his country to ours and our PM should be demanding a stop to it, as well as returning the illegals to the safe US, per our agreement with them. Organized crime syndicates, gangs, and a whole chain of criminals (including taxi drivers charging $1000) are getting rich and it is disgusting that they are being enabled instead of arrested, since human trafficking is a crime. The vetting for immigration and at borders may be inadequate, but at least it's something. Those crossing through fields are complete unknowns. Those who have destroyed their documentation are obvious frauds and the onus must be upon them to prove who they are and where they are from, or be jailed indefinitely with zero chance of staying when released. This is not going to be a repeat of the EU.

Thank you for your comments. I just wanted to clarify, though, that the number refers to people from the U.S. with legal status in the U.S. (the figures say "by citizenship"). There was a small section of people whose origin was unknown, possibly due to the lack of documents, but the people referred to in this story did have U.S. citizenship, and thus have weaker odds of claiming refugee status.

Hi Jenny, thanks for the

Hi Jenny, thanks for the clarification. Given the number that have US citizenship and have such slim odds of being allowed to stay, will NO be reporting on what it is costing the system to process these applications? Full support, including legal services for the years it takes to exhaust all appeals and deport, by which time many have given birth to anchor children with Canadian citizenship, does not come cheap. Money will be found to support this group of illegal aliens who broke laws to come, knowing they were not entitled. It will be redirected from people and programs that desperately need it. Those deported don't have to repay a dime to this country, nor will it stop them from returning. I think there needs to be some coverage on those areas.

I am sorry to have to point

I am sorry to have to point it out to a news organization like yours, but when people from the USA come to Canada, they are still in America. We have to call them Americans because their is not other word in English, but they can't claim two continents as theirs. Please do not call the US America.

Thanks very much for your comment. We'll consider this to improve future coverage.
Best wishes,
Jenny