By Jenny Uechi | News, US News, Politics | February 7th 2017
#17 of 35 articles from the Special Report: Syrian Refugees in Canada 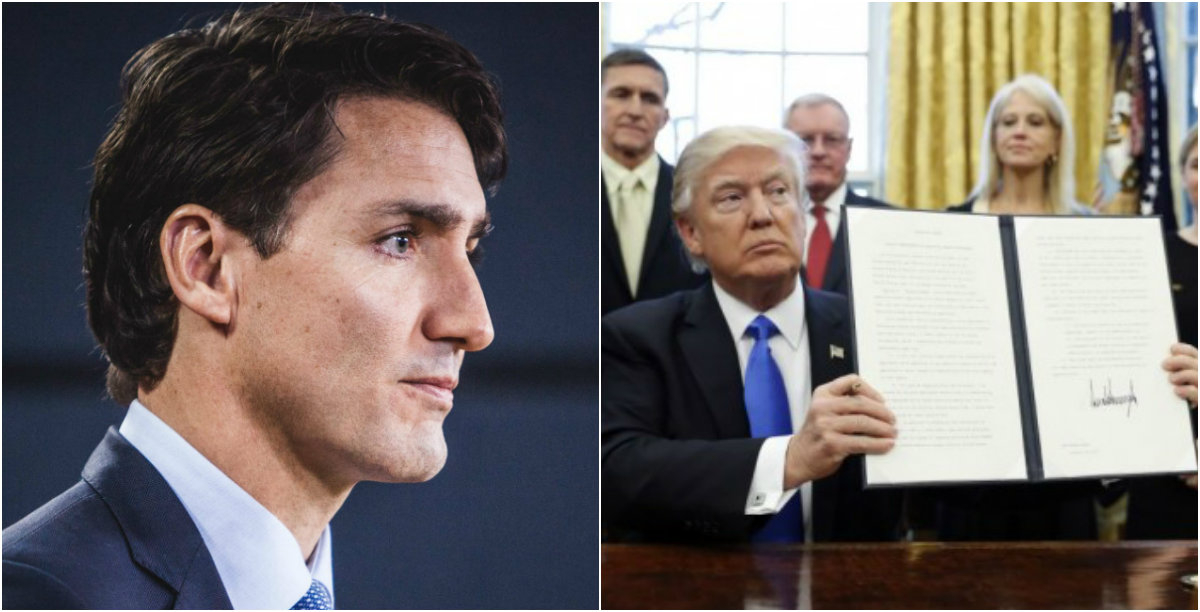 As confusion reigns over President Donald Trump's temporary ban on U.S. entry to refugees and citizens from seven Muslim-majority countries, some Canadians urge the federal government to practice what the prime minister preached on twitter by letting more refugees into Canada.

Private sponsors in Canada say the government should, at minimum, consider raising the number of private refugee sponsorships this year, in response to borders closing in the U.S.. The current cap for sponsorships known as "group of five" and community sponsors is 1,000 applicants for refugees from Syria and Iraq, a limit which was already reached in January.

"Prime Minister Trudeau has issued an invitation to refugees to come to Canada. It's a wonderful gesture, except at the same time his government has significantly reduced the number of refugees who are allowed to come into Canada," said Laurie Cooper, a Whistler, B.C.-based sponsor for Syrian refugees, who volunteered at refugee camps in Greece in the last two years.

Cooper said the prime minister's viral tweet last week saying victims of Trump's executive order would be "welcome" in Canada was at odds with his actions, as the Liberals resisted calls to take concrete measures to help.

Despite a late-night emergency debate in Parliament on January 31 about how Canada should respond, the Liberal government said the number of refugees it plans to take in this year remains unchanged at 25,000 refugees.

The U.S. refugee admissions program was restarted on Monday due to a federal judge's temporary order on Friday to immediately drop the ban, but the situation remains deeply uncertain as federal prosecutors are attempting to convince the courts to reinstate Trump's order.

While the executive order suspended all refugee admissions for 120 days, Syrian refugees were banned until further notice. Citizens of Iraq, Iran, Sudan, Libya, Yemen, Somalia and Syria were banned from entering even with U.S. visas and even if they had lived in the United States. After the court order temporarily lifting the ban, many scrambled to get into the United States on the weekend.

"There's a lot of confusion for everyone involved," said Elizabeth Foydel, a policy counsel at the New York-based International Refugee Assistance Project. The refugee intake restarted after the Friday court ruling and flights that were canceled had been rescheduled, she said, but it's unclear how long that will last.

"It's a non-stop evolution...the White House response has been very confusing to follow," Foydel said. "There have been instances in the past when something new or unexpected happens, but I don't think it's ever been on this scale. The U.S. has a history of maintaining a pretty robust refugee resettlement program, and there have been times that we've slowed down the screening process for a particular region, but there's been nothing before on this scale."

She said it's still within the "realm of possibility" that the White House's appeal may succeed. Either way, it may wind up in the Supreme Court, and Homeland Security Secretary John Kelly predicted Tuesday that President Trump's order will prevail.

Confusion is illustrated by treatment of questions to U.S. government departments about Syrian refugees. Questions from National Observer to the U.S. State Department on Monday morning were redirected to the Department of Justice, then directed back to the State Department, and left unclarified at the end of the day.

Cooper is among the private groups of Canadians who have sponsored about 13,000 of the 38,000 Syrian refugees who have arrived in Canada since November 2015. She's part of a passionate, dedicated network of volunteers, some of whom worked feverishly over Christmas break preparing applications to sponsor more Syrian families in 2017.

Because the Liberal government announced in December that it was putting in caps to deal with the existing backlog of refugee applications, many private Canadian sponsors were upset to see their applications rejected by the federal government.

Now with Trump's ban targeting Syrian refugees even more than others, some private sponsors are pushing the federal government to take bolder steps to help. They say Canada must raise its limit on private sponsorship of refugees, in which citizens raise about $30,000 to help each family adapt to their new home.

"One thousand spots is really a minimal number. It's ridiculously small if you look at the scale of the crisis and what's happening now," said Vania Davidovic, a volunteer in Oakville, Ontario who raised funds for multiple refugee families.

A Serbian Canadian immigrant who experienced war in former Yugoslavia, Davidovic said "the suffering of war victims felt close to heart." Both her parents were war orphans as well, she said. Because of its proximity to the U.S., she said Canada was the logical place to take on refugees who are in limbo.

"Just consider people who were prevented from entering the USA because of the new administration. Canada's the next place they're looking at," she said.

In Vancouver, B.C., Zarah Tinholt, a sponsor whose 14 applications for privately sponsored refugees were all rejected by Ottawa, is frustrated by the federal government's reluctance to step up its refugee limit.

"It's extremely disheartening," she said.

"I still get a lot of compliments from politicians," Tinholt said. "But when that doesn't turn into any kind of action for relief, that's pretty concerning."

Tinholt had dedicated much personal time filing applications for Syrian families, and feels politicians could take more leadership on the refugee issue, as Canadians like herself were doing.

"I'd literally spent my entire Christmas nonstop at the computer, and only had one or two evenings with my kids. So to get rejected after feeling the relief of getting applications in...was devastating and frustrating. It's taken an entire month out of my life that I won't get back."

"We're presenting our country in this light, as a humanitarian country, so we need to be consistent," she said. "We need to prove through action that what you preach is what you practice."

In response to a question about whether Canada will take on any refugees rejected by the ban, Immigration, Refugees and Citizenship Canada spokesperson Nancy Caron said Canada is still taking on 25,000 refugees from around the world. But the government isn't planning to boost that number for the time being.

"As Minister Hussen has said, 'We are doing our part as a country to meet our global obligations to refugees. We will continue that tradition and we will continue to make sure that we’re open to those who are seeking sanctuary,'" she said.

Foydel, the lawyer with the International Refugee Assistance Project in New York, said she was in touch with Canadian lawyers about the possibility of helping stranded refugees enter Canada, but that no changes have come out of it yet.

"We were thinking is there some possibility of creating some space in the Canadian system for these cases? We don't want to displace people who are already in the queue," Foydel said. "But is there any way to raise the target for government sponsored refugees or privately sponsored refugees to see if we can help some of the most dire cases who have been immediately affected by the ban?"

Nasrin Ajak, a Surrey, B.C. resident who came from Syria as a teenager, said President Trump's ban has struck fear into refugees who worry they'll be targeted next. Already, over 20 asylum seekers walked across the U.S. border to Manitoba in –20 C weather over the weekend. Ajak's cousins landed in Washington, D.C., shortly before the ban, but are asking her if Canada might take them, she said.

"They're so afraid right now. They're freaked out," she said. "I just told them to relax, talk to a lawyer, but they don't know what will happen to them in the future."

"Canada is expected to be a leader"

The U.S. and the U.K. had been studying Canada's private refugee sponsorship model prior to Trump taking office. In addition to being cost-effective, as citizens raise the funds for the family, the model was considered successful because refugees had a ready network of locals wanting to help the adapt to their new culture.

"Canada is expected to be a leader in this area. This goes far beyond simply the U.S.. Many countries have been looking to replicate the Canadian model," Tinholt said.

"We really do have an opportunity to step up, and it's not going to cost the government. One of the things I feel strongly about is, if this is an issue of cost to the government, then why not charge us a $250 administration fee? Or $500 per refugee application? We can pay some sort of administration fee to help cover the costs involved. I'd rather pay some money and see refugees come through at no cost to the government, than what they're doing right now, which makes absolutely no sense."

She said the Canadian government's limitation on refugee acceptance this year has resulted in deep disappointment among private sponsors and despair among rejected refugees. She said her group of refugees included English-speaking engineers and doctors, and that they could adapt easily to life in Canada and contribute if only they were given a chance.

Davidovic told National Observer she understood that Ottawa couldn't accept an unlimited number of private refugee sponsorship applications, but was concerned that it was stifling volunteers' efforts to help get refugees to safety.

"We have the energy, we have the money, the willingness...they killed a brilliant idea. They offered it, and I can't describe the enthusiasm of people involved, and it could have done so much more if the government supported it."