'If I don't have the moral courage to challenge authority, we don't have journalism.'

By Heather Ward in Opinion, Entertainment, US News, Politics, Culture | February 27th 2017
#10 of 107 articles from the Special Report: State of Journalism 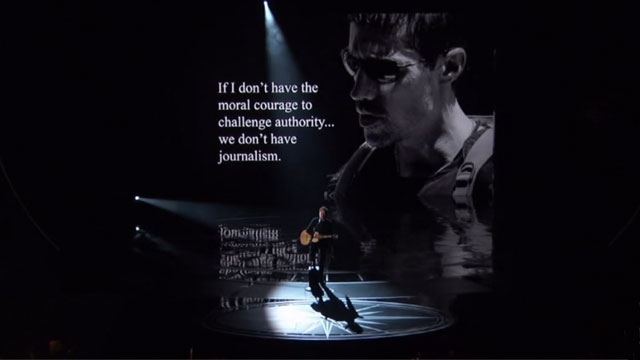 Screenshot of Sting performing 'The Empty Chair,’ nominated for Best Original Song at Oscars on Feb. 26. The song is featured in the HBO documentary film Jim: The James Foley Story, about a U.S. journalist killed by ISIS in 2014
Previous story

If you missed the Oscars last night, you missed a moment. While today’s water cooler recaps centered around the Best Picture mix-up, one of the most memorable and haunting performances of the evening came from Sting.

In a heartbreakingly beautiful tribute to journalist Jim Foley, Sting sang The Empty Chair, nominated for Best Original Song, underscoring an evening wrought with political statements, protests and pleas. The song is featured in the HBO documentary film, Jim: The James Foley Story, about the American journalist who was beheaded by ISIS in 2014.

It is not surprising to see the arts community speak out on the need for unity and empathy in these divisive days.

But last night, the spotlight shone on journalism.

It has been a year since Spotlight won top honours as the 2016 Academy Awards’ Best Picture. A film that took audiences behind the bylines, and portrayed, in the words of media journalist Alicia Shepard:

“the tediousness of strong investigative reporting, the fierce determination of reporters, the bravery of top editors and how persistence can bring about real change.”

Even Hollywood’s most imaginative writers couldn't have scripted what has unfolded in the U.S. since then. Stranger than fiction, indeed.

The work of journalists is coming under severe attack. The media is under constant assault from President Trump, who calls it the "enemy of the people." The call for quality journalism is also getting stronger, and support is growing deeper.

Last night’s Oscar crowd rose in their glittered gowns to give a standing ovation for Meryl Streep, who just weeks ago made an impassioned call to action to support journalism during her Golden Globes Lifetime Achievement Award speech, "because we're going to need them going forward. And they'll need us to safeguard the truth."

The awards’ tribute to Foley is a reminder not to downplay, distract from, or ignore threats to freedom of the press.

“People ask me all the time, ‘What kind of stories do you want to tell, Viola?’ And I say, exhume those bodies. Exhume those stories — the stories of the people who dreamed big and never saw those dreams to fruition.”

And that's what Sting did with his performance last night. As his moving tribute came to a close, an image of Foley appeared on the screen with a quote that feels incredibly prophetic today:

Quality journalism has never been more important. Will you support it?